What were you doing when scouted? Working, I guess.

How would you describe your style? Rock and roll.

Where do you get your hair cut? I haven't gotten my hair cut anywhere but my house in years. I've been growing it out since 1998. 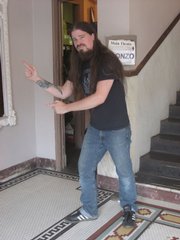 Least favorite trends? Pink polo shirts with the collar popped, and not dressing for the weather (ie: short skirts and heels in January).

Tattoos/piercings? I have a statue tattooed by Carlos at Big Daddy Cadillac's and my ears are pierced.

Favorite coffee shop: I would say La Prima Tazza, mainly because they have the best baristas.

Favorite bar? The Replay, because they give a lot of exposure and support to bands from out of town that are just starting out. They give them the chance to be heard and really support touring acts.

Who are your fashion influences? Godflesh, Meshuggah, Slowdrive, and Han Solo.

What's the best show you've seen at Liberty Hall? Quicksand, mainly because they only put out two records and weren't together long. Seeing them here was tremendous, especially because we don't get a lot of heavy music here.

Tell us a secret: Something happens to me every time there's a full moon-see "Teen Wolf" for an explanation.

Lookin' good there. I'm surprised you didn't mention your most obvious fashion influence... Levar Burton in the titular role of Pinoccio. (He was in that one right?)