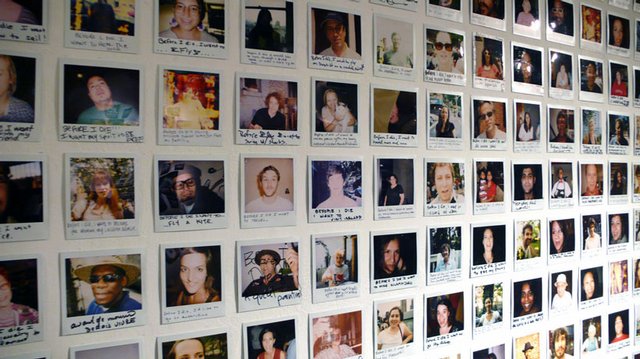 "To have emerged from nothing. To have a name. Consciousness of self. Deep inner feelings. An excrutiating yearning for life and self-expression. And with all this, yet to die." —Ernest Becker

What make some people more aware of their own mortality than others?

What motivates people to take action in their lives?

What values do we hold as a society?

Artists Nicole Kenney and ks rives address these questions in their global survey of human attitudes toward death in a project called "Before I Die I Want To..."

In contrast to morbid doomsday memes, Before I Die's take on death is ultimately life-affirming, casting the contemplation of death as a catalyst for creative action in life—as an impetus "to go out and do something with your life—before it's over."

The project is also a tool for identifying commonalities in cultures, and in the human condition. "It's very common that Americans focus on money," says rives. "And a lot of women want to have babies."

The concept is deceptively simple. Ask a person, usually a stranger, to finish the sentence: "Before I die, I want to..."

Take a Polaroid picture of the person as they voice their goal.

Have the person write the goal on the bottom of the picture.

Post it on beforeidieiwantto.org. So far there are some 500 Polaroids of subjects in New York, Chicago, Atlanta, Los Angeles, and Boston. The project's next stop is Lawrence.

Kenney: We want to get as big a demographic as possible. ks and I live in big cities, and she thought it would be good to go to Kansas— where she's from—and get a different perspective.

rives: I heard from this woman named Chantel [Guidry, of the Lawrence Percolator]. She's an artist in Lawrence and she offered to take me around. I've been conversing with her about where to go, where people are and how to get a diverse group of people. I've been to Lawrence a few times but not enough to make a plan on my own. ... I've contacted people in Yoder, Haven, Winfield, Wichita, Hutchinson, Abilene, Lindsborg...

rives: Kind of. I was just in New Orleans and Baton Rouge for three weeks, taking photos there, then I'll be in Kansas for a week, and then back to Chicago. Then I leave for Nevada, a week-and-a-half in Lake Tahoe, then back to Chicago for a couple of weeks. Then we'll both be in India for a month-and-a-half, then the Philippines for a few months.

You're funding this project out-of-pocket?

rives: Yes. It's a struggle, sure, but we're passionate about it and we believe that eventually someone's going to get on board and fund this for us.

This project has long-term goals.

rives: Absolutely. We just applied for the Google grant—they're giving $10 million to five chosen projects. We applied to do a world-wide tour. We want to do a cross-cultural comparison and use the project as a tool to study the world, to talk about death and talk about goals, to find out what people consider important.

Kenney: Living life to the fullest is one side of the coin, and death is the other side. Helping people see that is part of our intention.

Polaroids from the "Before I Die..." project 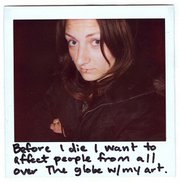 rives: Originally the theme of death came up because we wanted to do a Polaroid project. Polaroids are going extinct; they won't be around much longer. Nicole had done a small survey project asking people what they wanted to do before they die. I linked that to the Polaroid extinction. Death is a universal theme. I think Americans have a tough time dealing with death—we try to avoid it, reverse it.

Kenney: Lately I've been thinking about death in terms of human relationships, the phases you go through. In my Before I Die I said I wanted to "live a long life with Brett and leave some kids behind." He and I just broke up last weekend. That's another part of Before I Die—some goals will never come true.

In your process, what triggers you? Are there any cues that prompt you to choose a particular subject?

Kenney: Sometimes, certain people seem more open to it. They're not hurrying with their heads down.

rives: For me, it's fairly random, but I need to be in the right mind-set to do it. It's been a learning process for me, to approach people and start up a conversation about death. It's like a cold call—people are hesitant at first.

Kenney: Some people express their goals right away, others don't even want to think about it.

The installed "Before I Die..." show by Nicole Kenney and ks rives.

Having your subjects write their goals in their own hands adds information for the viewer. Is it also a tacit contract, a commitment?

Kenney: You said it, you wrote it down, it's on the internet. I think it helps people remember their promises to themselves.

You're combining photography, written narrative, and a kind of performance art...

rives: It is performance. Are we the directors and the subjects performers? Or the other way around? ...Also, this project isn't limited to Nicole and I taking the photos—we encourage people to take their own. On the website, we give instructions own how to submit photos. This project is about the audience.

The internet is an integral part of this project.

Kenney: I'm glad that people are making art so accessible on the internet. It's free—you just need a computer. You don't have to go to a gallery.

rives: It's strange; I can't think of life without the internet anymore.

It's early in the game, but have you had any subjects report progress on achieving their goals?

Kenney: Not much yet. Right now we're focused on taking as many pictures as we can. My refrigerator has a lot of film in it, but not as much as I would like. Once we run out of film, then it'll be time to follow-up with the subjects.

rives: The project really begins after the photo is taken, when people take action to fulfill their goals.

When it runs out, do you switch to another format?

Kenney: Well, that's the question. If we want to keep the project going, we'll talk about a different medium when the film runs out. A re-incarnation.