Twas the weeks before Christmas, when all through the economy
Not a shopper was stirring, not even at Anthropologie.
Stockbrokers hung themselves by the neck out of scare,
Losing hope that the TARP bailout soon would be there.
The homeowners were nestled in beds they had wet,
While visions of foreclosure danced macabre in their debt.

The Ladies of Lawrence Arts, aka LOLA,
Said, “Screw this recession—sisters, let’s souljah!”
To spread good will they made crafts and they made art,
Handmade gifts and goodies to stoke cockles of heart. 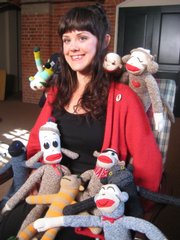 New to the fold is one Kristen Kinsch,
Joining LOLA this year to kick the balls of the Grinch.
She comes baring many kind of adorable Stitchee,
Knit monkeys guaranteed to make you a lot less bitchy.
Miss Kinsch joined us to chat of LOLA and of socks,
And how the spirit of giving could be saved by some cuddly macaques.

lawrence.com: What drew you to arts and crafts, and how did that lead to sock monkeys?

Kinsch: Ever since I was young I’ve always been into art and crafting things. I love making things with my hands. Painting, knitting—I’ll pretty much try anything. When it comes to sock monkeys, it sounds kind of cheesy, but they’ve always put a big smile on my face. I love the nostalgia and how they’re a big part of American culture. The ingenuity behind them is great, how someone took these socks and made a stuffed animal out of them. It’s fun and amazing. When I knit them it’s very therapeutic—it’s monkey therapy.

What’s the history of these iconic monkeys?

Rockford, Illinois is home to the Nelson Knitting Company. Nelson created the red heeled work sock, which is used to make the classic sock monkey. Nelson says the first sock monkey was made in the 1920s, but some other sources claim 1932. When Nelson realized that people were making monkeys out of their socks, they began to include directions on how to make your own monkey in every pair.

What is it about these patchwork primates that make them so irresistible to hug? Are they the missing link? Do we recognize ourselves in them?

I think so—there’s a little bit of monkey in all of us.

Will they throw fabric feces? Can it groom the parasites off of me?

If you cast a spell on it that brings it to life, possibly.

How did you come to be involved in LOLA?

I met Kylie Grater, who created LOLA some years back, at a party my friend was hosting. Kylie had brought some of her jewelry along and asked me to take a look at it, and in my klutziness I spilled red wine all over it. I was very embarrassed. She was very sweet about it and, after I told her I was interested in jewelry making, still invited me to help her out in her studio. She invited me to do LOLA when she found out I was doing the sock monkeys, which I had started doing just as gifts for friends.

Why should people shop at LOLA?

Well, it’s all about shopping local and supporting your local artist. You can find one-of-a-kind things there that people put their hearts into, made with their own hands and their own creativity. It’s not mass produced, where you have no idea where it came from. It’s helping people to remember that options are still out there rather than just going to big box stores. I feel very honored to be a part of LOLA.

Speaking of big box stores, are you hoping someone gets trampled to death at LOLA? Would that be the mark of a successful show?

No, I’m just hoping for steady foot traffic and maybe a little bit of shoulder-to-shoulder crowding.

Has something been lost in the commercialization of gift giving?

Definitely in going out and buying big ticket items that were made by a corporation, where the people who made them are getting paid low wages and are maybe even slave labor. Buying one, small heart-felt gift or just making your own gift to give to someone has a lot more sentimental value.

This Christmas might not be so jolly for some people, considering the economy is in the crapper. Do you think, in its own adorable way, the Stitchee might be able to soften the impending economic Armageddon?

Possibly? Getting back to cottage industries is might be something we should really look at again. Maybe it’s not even possible for that to ever happen again, but bringing it back to small businesses—people creating things out of their own home—isn’t a bad idea. Who knows—if I had a thousand arms and could crank out a thousand monkeys every day, maybe I could make an impact.

She should check out spookmonkeys: http://www.sockmonkeydrawer.com/spookymonkeys_2008/Sadly they're always sold out of stuff.