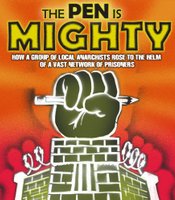 The Pen is Mighty

It's Sunday in a basement office at 14th and Massachusetts streets, and five Lawrence anarchists are doing what they do every Sunday: running a vast network of politically radical prisoners. Equipped with a copy machine, a couple computers, a printer, a fax machine and a stock of secondhand tables and filing cabinets, the small, paper-stuffed office operates as a scrupulously organized mailroom for the Allied Resistance Network.

Thoughts of a Latin King

A Q&A with Gabriel ConcepciÃ³n a.k.a. Jose Cruz a.k.a Blaze

Gabriel ConcepciÃ³n, a.k.a. Jose Cruz and best known as Blaze, was a founding member of the Allied Resistance Network and has written a number of essays on prison issues and his political ideologies. He works for a delivery company and lives in the Bronx, where he grew up.

You have to break a red wax seal to get your grubby little paws on American Catastrophe's "Excerpts from the Broken Bone Choir." The album's handmade packaging connotes a contract between the band and the listener: break the seal, and there's no going back. Imagine a motel lounge in a David Lynch movie where something bad is about to happen: woozy guitars pick out minor chords, cymbals crash and a commanding baritone chants "hang 'em high."

Four summers ago, a skinny kid with a big, Dylanesque mop of hair named Patrick Clendenin prepared to head east. "For a long time I just wanted to go to New York, without having visited," he said at the time, "just because of its reputation for being the city of opportunities and chances for what you dream about." 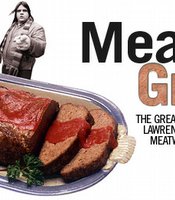 The Great Lawrence Loaf Off pits meatwad against meatwad

Do not be fooled by the meatloaf's unassuming stature within the annals of America's gastric history. That sculpted brick of substandard beef and kitchen flotsam is coated not only in ketchup, but also in glory. As with the breadcrumbs holding it together, meatloaf binds us as a people. Lawrence's Committee of the Loaf recognizes this fat-dripping greatness and is aiming to spread the good loaf's gospel far and wide with the first annual Great Lawrence Loaf Off.

Last week, Breaking News crafted its first-ever essay contest. Readers (like you!) were asked to send essays to frank@lawrence.com or to our physical mailing address, stating, in any form, why they deserve the Special Prize.

Despite its minor flaws, DMC4 is still a blast to play through, and should please longtime fans of the series.

Lawrence film critic Eric Melin won $25,000 in his appearance on "Who Wants to Be a Millionaire," which ended Tuesday after he answered a question incorrectly. 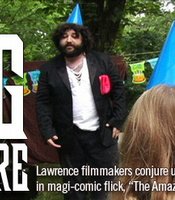 Would you, good sir or madam, care to witness a magic trick? A feat of prestidigitation so astounding-so beyond the realm of the mortal plane-your eyes may actually boil in their sockets through sheer amazement? Then behold, kind stranger, "The Amazing Ignatius"! An illusion of moving pictures, miraculously filmed with no budget in the Lawrence area, featuring bodily fluids materializing from thin air and massive piles of cocaine improbably disappearing through sleight of nostril. Snort your heart out, Criss Angel!

Congratulations! You are reading the ninth weekly installment of Breaking News. To celebrate the continued support of readers, readers like you, Breaking News is pleased to announce its first-ever giveaway contest. 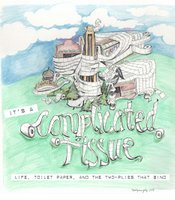 Life, toilet paper, and the two-plies that bind

Picture this: You are in a public bathroom, wiping your ass. You might be using the air-thin toilet paper KU uses, or the silkier stuff that occupies the bathrooms of the Eldridge Hotel. It doesn't matter. The brand, the thickness, the softness are irrelevant at this point. Just think about toilet paper. Think about whether you have thought much about toilet paper. Now come to the library, a place for thinking. 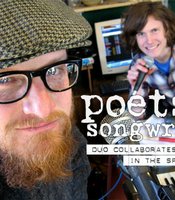 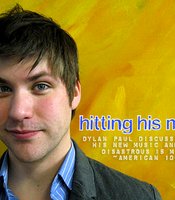 Remember that kid in high school who all the teachers called a "Renaissance Man"? Dylan Paul Hilpman was that guy at Free State High School, and he took it to heart. Now 24, Hilpman is enjoying a full-time career as a roving stage actor in productions like "Othello" and "Fiddler on the Roof." But his booming voice wasn't simply made for the stage-it was made for actual pop music: the kind that Maroon 5 and Justin Timberlake sizzle. It's so catchy that you might want to hit him in the face-and that's cool with him, as long as you get on the dance floor.

Townie guide to... trivia under the influence 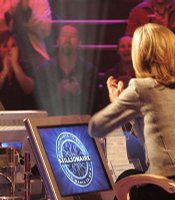 One in a million

"Lotion." That was Eric Melin's answer to a question that has haunted him since appearing last summer on the VH1 program "The World Series of Pop Culture." The question: "In the famous scene from 'There's Something About Mary,' what does Cameron Diaz mistakenly think is hanging from Ben Stiller's ear?"

We take a look at the games of mid-February.

All facts in this story are real.

A clash is a-comin'. An architectural clash. A few months ago, the tide of progress seemed to roll onward in its depressing way when the developers of the proposed Oread Inn on the edge of campus offered to buy the adjacent Ecumenical Christian Ministries building. 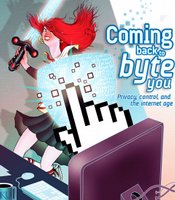 Coming back to byte you

Three years ago, Paul Trigoso received one of those emails purporting to be sent from eBay. The email said someone had been fraudulently using his account. He needed to log in and confirm his credit card information and so forth so the company could affirm the account's validity. He followed a link, typed in his username and password and filled out his financial information. The next day he received the email again, which seemed strange. He went to eBay and read a bulletin the company had posted about scams.

You might know Paul Flinders as the Lawrence artist who paints those big-headed ectomorphs in surreal states of reverie. You may also know him from his series of birds with gangly legs. Well, expect none of that for his latest solo show, "Bleached Works."

Toss pop, punk, disco and a whole lot of Astroglide into a Cuisinart, repeatedly press "Pulse," then dump on top of a mustache orgy-now you've got the recipe for Ssion's "Fool's Gold." Finally available in wide release through Sleazetone Records, "Fool's Gold" is the infectious new album from Kansas City art-noise collective, Ssion (pronounced "shun"). 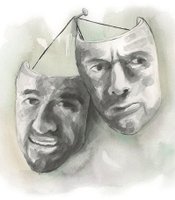 What's cooking this weekend, dear reader? One idea: a play. Yes, a play! Why? Because it is free. And besides, you have not been to a play in a very long time, have you? It's written and directed by a KU senior named Adam R. Burnett, who, despite his age, is already a pretty experienced playwright, and an interesting fellow to boot.

Townie guide to... anarchy in the LK 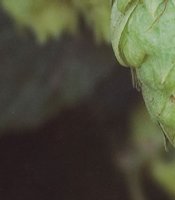 Joe Yoder takes great joy in bitterness. "Different people have different tastes when it comes to food or drink," says Yoder, a 10-year member of the Lawrence Brewers Guild. "I like beers that have a more pronounced bitterness. There are people who prefer a sweet taste, and they prefer the maltier beers like an Octoberfest or a bock. I enjoy making really hoppy beers." Unfortunately, that bitterness is starting to reflect the overall mood of micro/craft and home-brewers around the world. 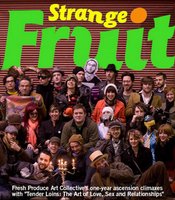 Things began a year ago when a small group of young Lawrence artists met at the Hookah House...

RE: Townie Guide to Political Hackery

I am writing in response to "A Guide to Political Hackery," an interview between Gavon Laessig and Galen Turner that was published in the January 22 print edition of lawrence.com.

As the poet J. Geils once immortally intoned, "Love stinks." It's this immutable truism that lies at the blackened and oozing heart of The Ex Show. It's a multimedia art exhibit that invites attendees to whimsically wallow in the filth of their own ex-relationships by providing a venue to purge mixtapes and other detritus from former lovers. Throw in activities like "Pin the Tail on the Ex," and organizers hope this interactive invective forum will help purge the soul.

Midway through his set at KJHK's Farmer's Ball, Stik Figa experienced every rapper's worst nightmare: his CD skipped. Where a less charismatic rapper might have crumbled, Figa simply went a cappella-and subsequently won the damn thing.

The job sounded simple enough the day the Peace Corps dropped Katherine Carttar off in the highland Mayan town of SololÃ¡, Guatemala. She was to work with a small lending organization that supported hundreds of indigenous farmers and artisans and, if she succeeded, get them fairer prices for their potatoes, carrots, onions, and handmade goods.

A dead bird as white as fresh lard lay along the sidewalk on Seventh Street... 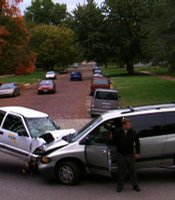 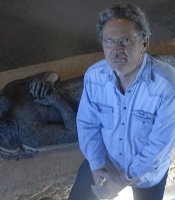 Jesus is lying on a slab of stone, holes through his hands, resting peacefully before his resurrection. It's a familiar scene for Christians everywhere - until one sees the curled-up dinosaur at his feet. One part artist's interpretation, one part historical matter, this 6-foot-4 Jesus is something else, and not just because he's got a friendly, gold-eyed mosasaur skeleton resting with him. Jesus' body is made, its creator Alan Detrich says, of Tyrannosaurus rex fossil fragments.