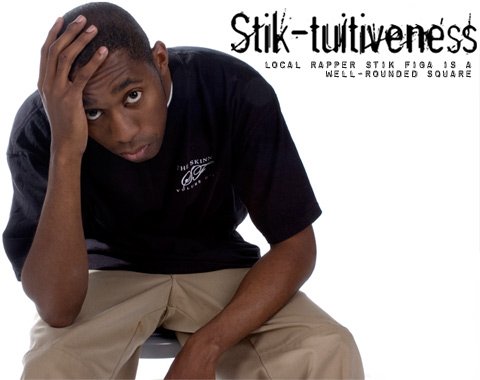 Midway through his set at KJHK's Farmer's Ball, Stik Figa experienced every rapper's worst nightmare: his CD skipped. Where a less charismatic rapper might have crumbled, Figa simply went a cappella-and subsequently won the damn thing. Such ingenuity has been John Westbrook Jr.'s calling card since his days battle-rapping in the Topeka High cafeteria. With a no-coast style that's equally enamored with the crescent-fresh mainstream (Kanye West, Lupe Fiasco, T.I.) and the booty-shaking fringe (Cool Kids, Santogold), Figa is Southerner by blood and a Midwesterner by choice. His debut EP "The Skinny" is as hilarious as it is biting; each time you laugh, you might just catch yourself contemplating something deep. As Stik Figa puts it: "I'm very well-rounded for being a square."

Midway through his set at KJHK's Farmer's Ball, Stik Figa experienced every rapper's worst nightmare: his CD skipped. Where a less charismatic rapper might have crumbled, Figa simply went a cappella-and subsequently won the damn thing. Such ingenuity has been John Westbrook Jr.'s calling card since his days battle-rapping in ...

lawrence.com: What have you been up to lately?

Stik Figa: I put out a mixtape earlier this year called "The Skinny," which is available as a free download on my MySpace page [Note: said MySpace page has since been suspended-ed]. Then I did the "Looking Good" EP with Miles Bonny. It features three original songs, two remixes and the instrumentals. "The Pie" (a new single) is from a joint album I'm doing with Seven, who is responsible for a lot of Tech N9ne's production. We're putting that album together now. It's called "Stik Figa as Himself." It should be dope.

(While listening to the song "What It Is") Real simplified kind of beat here.

Yeah, that's my whole thing. The name Stik Figa and the music is really about simplicity and keeping things straightforward and relatable-not too much of the Hollywood attitude. I'm from Topeka; there are no coasts. People out here who want to be stars and get to California-man, keep that : When people come from out of town, the first thing they'll tell you is, "Man, these are some of the nicest, most honest, direct people I've ever dealt with." And I think that's something to be proud of, if nothing else. We don't have winning baseball or football teams, but at least we can say that beyond all the subtle racism and not-that-progressiveness we're generally pretty cool to be around. I try to get that across on the music-no ego.

Can you tell us a bit about the song "Rollin"?

It's another track that's on the Miles Bonny EP, about rollin' in a jacked-up ride.

What kind of jacked-up ride?

A '97 Honda Accord with no air. It's dedicated to jacked-up rides of the past like the 1990 Oldsmobile Cutlass and the Regals and Caprices and all that stuff. Take pride in your hooptie.

Is your background more pen-and-paper or battle format?

Early on, it was strictly a battle format. All I would do is freestyle. I didn't know how to write songs at all. We had Freestyle Friday-before it was on BET-at Topeka High. The first moment when I wanted to pursue rapping, I was in a battle with a dude during lunch break and when I looked up there were at least 80 to 100 people. We're battling and the bell rings and I say The bell rang, I gotta get to class / And besides that fact, I'm through whooping your ass : I did two battles (in Lawrence), but more recently I've been getting my mind around making catchy songs.

Tell me about some stereotypes that are unfounded about Topeka.

We've kind of gotten the reputation as being the guys who come to the party and shoot it up. Especially in Lawrence, there's been a history with Last Call and The Granada. We're all not crazy; we all don't want to hurt you. A lot of us are good, normal, low-income people.

What's been stewing on your brain lately when you sit down to write?

Not to be self-absorbed, but currently I'm writing more introspective stuff. It's still funny-I'm trying to keep it light, 'cause I'm a light person-but I'm doing more observational stuff and telling the story honestly of kids like myself from the Midwest. A friend of mine in Washington, D.C., was telling me that he doesn't know what it's like to walk out the door and not see black people : Hopefully it'll let some people in on what it's like being us out here in the Bible Belt : Plus, I'm kind of a square. I'm not as cool as I sound. I'm really nerdy. I always had a hard time talking to girls : I was getting punked by dudes on a regular basis. I'm not hard. I ain't never sold dope. I ain't never shot at nobody. I was observing as that stuff was happening.

Thank you Richard for featuring another fantastic local rapper. Stik is amazing!!

Range Life and InnateSounds would make for a beautiful collaboration-maybe just the kinda thing that would take this area's artists beyond occasional, minimal attention to Saddle Creek-style staying power.