Why do you hate America so? Please justify your appreciation of these silly, Limey little people.

"No reasonable, educated person could hate America-there's just too much good stuff here. We are the greatest country in the world, but not because of our military prowess or corporate power. We invented the electric guitar, peanut butter, bluegrass, astronauts, root beer, 'Magnum, P.I.,' Stephen Colbert, and Hawaii. Plus, we own the moon-check the flag, bitches! It's too bad that so many Americans are embarrassed of their country. There's no shame in thinking that my country is great. Everyone all over the world should be able to think the same thing about their countries. But not everyone has it so easy. I'm lucky to live here and especially lucky to be in Lawrence, Kansas, the best city in North America. So, why my fondness for the Limeys? They talk funny."

Does visiting the British Isles strengthen your appreciation of Queen & Empire, or does it make you wish Hitler had finished the job with just a few more blitzkriegs?

"It's odd you should put it like that. While I was in England this last time, I told one of my friends there that trying to travel by train in England made me think the Blitz wasn't such a bad idea. If only Germany could have occupied just long enough to teach them a sense of efficiency and time management. Just thinking about Victoria Station gives me a headache. Of course, when I'm not there, all I dream about is traveling in England. Some of the best scenery I've ever encountered I've viewed from the windows of the British railways." 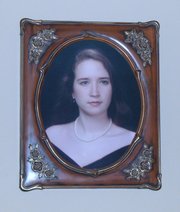 "Brits is the only shop in Lawrence with adequate tea selection. And where else are you going to find 'Pride and Prejudice: the Board Game'? I love that shop most ardently! But you really just wanted to say 'spotted dick,' didn't you? Bloody typical."

Is it true that, out of awe and admiration, you cried while watching Helen Mirren in "The Queen"? Do British people even do that?

"Neither. I'd take the neeps, but that's about it. Seriously, after spending two months there, I can barely stomach potatoes in any form anymore. That's all they eat! F*cking chips, every-f*cking-where, all the damn time. 'Welcome to Britain, where potatoes are more than a side dish, they're an entire f*cking cuisine!'"

In the upcoming presidential election, will you be voting Democrat, Republican or Tory?

"It depends on what you mean by 'tea.' They have 'tea' instead of dinner, but there's no tea being consumed. Then, after 'tea' where there is no tea, they won't have desert, but they'll have 'pudding,' which is desert. Only when you get it, it's not pudding, it's some other desert which you're having for 'pudding' instead of pudding. You might get Yorkshire pudding with your 'tea' but it's not pudding either, nor is it dessert."

Any advice for aspiring fops with monarchical tendencies?