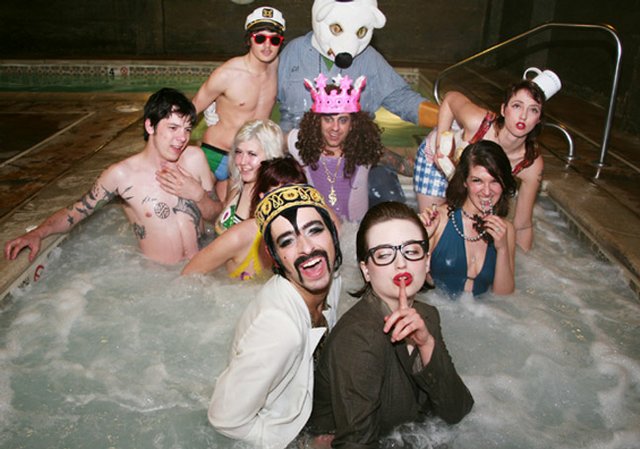 Toss pop, punk, disco and a whole lot of Astroglide into a Cuisinart, repeatedly press "Pulse," then dump on top of a mustache orgy-now you've got the recipe for Ssion's "Fool's Gold."

Finally available in wide release through Sleazetone Records, "Fool's Gold" is the infectious new album from Kansas City art-noise collective Ssion (pronounced "shun"). Ssion has been cavorting around the KC area for the better part of five years as a multimedia carnival of the queer, combining conceptual punk with cartoonish costumes and videos in a stage show that would've left Fellini slack-jawed.

It wasn't until Kansas City artist and Ssion founder Cody Critcheloe teamed up with musician J. Ashley Miller that the group began focusing more on the songwriting aspect of their three-ring sextacular. The fruit of that collaboration was "Fool's Gold," a fantastically gay party album that may provide Critcheloe and company with their first bit of crossover success.

Guest hosted this week by Gavon Laessig Toss pop, punk, disco and a whole lot of Astroglide into a Cuisinart, repeatedly press "Pulse," then dump on top of a mustache orgy-now you've got the recipe for Ssion's "Fool's Gold." Finally available in wide release through Sleazetone Records, "Fool's Gold" is ...

lawrence.com: What sort of stage production are you working on and will there be lots of half-naked young men and women?

Awww:but I assume it's still going to be a multimedia affair with video, dancing, props and the whole rigmarole?

Yeah, it has to be because it's a pop record, so we have to put on a pop show.

Other than being a kick-ass party album, does "Fool's Gold" have a narrative? Is there a concept behind the album?

Yeah, and it's basically "sexual anarchy." That's pretty much the theme of the live show, as well. It's a loosely based narrative, but if you were going to put some kind of terminology to it, that would be it. 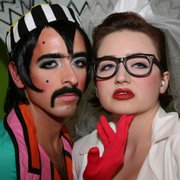 Cody Critcheloe (left) and J. Ashley Miller, among many others, are Ssion.

How is "sexual anarchy" going to be represented live?

Well, I do a good job of representing that. Then there's The Woman-she's amazing. It's hard for me to even talk about The Woman because her presence is so magnificent and powerful. When she walks out on stage, it's like women no longer exist and men have never existed. That's her power, and she has a lot to add to the concept of sexual anarchy.

Are you still intending to make a feature length film to go along with "Fool's Gold"?

That's true. It's basically going to be the gay, punk version of "Forrest Gump." It stars myself, The Woman, and everyone involved with Ssion-which is limitless right now. Basically, it's about The Woman, but I don't want to give too much away.

You grew up in Kentucky and then came to Missouri for art school. Did growing up in culturally conservative backwaters radicalize you into an art-punk, helping give birth to Ssion?

I guess so, but I never really thought about it. It was always just something I did. Even when I first started the band in Kentucky in high school, we always liked to do really crazy things and were always concerned about the performance. The music was totally different at that point, but I've always been inclined to do stuff like this. It's just what I do.

Were you a visual artist or a musician first?

Well, I don't consider myself a very good musician, but I love to write songs. I love collaborating with people who are great musicians, like Ashley. I think he's an amazing musician. I'm a much better artist than a musician. There's always a huge pull to the visual side of what I'm doing. I think that's OK-it's 2008, we can do whatever the f*ck we want. I think limiting yourself because what some silly rule of what rock 'n roll is or should be is just retarded. That's why I got into punk rock in the first place, you know? It's the freedom to do whatever you want.

Talk about the evolution of Ssion from punk to the virtually indescribable sound you have on "Fool's Gold."

It's just constantly changing. Before "Fool's Gold" it was pretty much just a straight-ahead punk rock band in the style of The Germs or The Stooges-that was the sound I wanted to have. There came a point where I just really got into pop music in the midst of doing that. I thought it would be really interesting to try and do a pop record. I was ultimately concerned about writing hooks, like, "If it's not catchy I don't want to do it." It's really hard, but you don't have to be a great musician to write great hooks. Most pop songs are three or four chords. I don't know, it just seemed right-I think pop music in general goes along better with what I want to do performance-wise. It allows a lot of freedom.

How close are you to the goal of turning Kansas City into a homosexual utopia?

It's odd-I don't try to make this into a specifically queer community just based on my sexual preference, or anyone else's that I'm hanging out with, but at the same time I think it's really interesting that someone could read online something about Ssion and have a really distorted view of what's actually happening in the Midwest. Like, "Wow, there's all these crazy kids in Kansas City doing all of this fucked up shit! I had no idea it was so gay!" That's amazing that someone in L.A. or New York could say, "Yeah, Kansas City is really gay!" It's not really like that, but in this day and age you have so many awesome media tools right at your fingertips that you can create any reality you want. You can convince other people that it's happening. It's really exciting, and I'm surprised that more people in the Midwest and places that don't have access to national media don't grab hold of those things and try to make it work for them. We are at a place right now where we really can.

Do you think you've convinced people in far-flung reaches that Kansas City is a gay Mecca?

Well, Kansas City is really gay, actually. I think that people who don't have the money to move to L.A. or San Francisco or Chicago-and they live in this middle area-the closest place is Kansas City. It's not a very cool or hip gay, but there's a huge gay population here.

Salt of the earth gay people:

Exactly-the "real" gay people. The kind of people that care more about Celine Dion than whatever the hot sh*t is.

Would you ever conceive of yourself as a role model for those gay kids in the more isolated and rural communities?

I don't think about it in terms of "role model." It's bigger than just a gay thing, and I think it's the great thing about being a musician or an artist when you can help out other kids in that same place. That really awkward phase where they can either pick up on something a little bit more outsider if they're interested, or just go down the same path their families always went down. I think it's great if kids are into what we're doing and want to do something similar. That's awesome. That's what punk is about in one way or another.

At one point in your career, you made an effigy of Tori Amos, filled it with blood, and splattered it across the stage. Are there any other celebrities you'd like to turn into a hemoglobin-filled piÃ±ata?

Not at the moment. When I did that, I was 20 years old and I was in a situation where we were opening for the Yeah Yeah Yeahs right as they were getting really popular, so my whole point was, "Oh, there are going to be all of these A&R people at the show. What's the most insane thing I could do?" That happened to be it. I thought it went pretty well. I was playing that show specifically to impress the Yeah Yeah Yeahs and the Liars and that group of friends. I didn't give a sh*t about the A&R guys-what are they going to do with something like this? It did its job-I think they had a really good understanding of why Tori Amos had to be smashed on stage. It made sense.

"Street Jizz"-a metaphor for the human condition or just a great song about man chowder?

It's just a great pop song. That's all it is, and that was our goal from the beginning. When Ashley and I started working on that song we were trying to write the catchiest song we possibly could. So catchy that it drove you crazy, where it would border on obnoxious. I was listening to a lot of Aqua, Vengaboys, and stuff like that, where it pretty much sounds like a cartoon. That was the goal.