A clash is a-comin'. An architectural clash.

A few months ago, the tide of progress seemed to roll onward in its depressing way when the developers of the proposed Oread Inn on the edge of campus offered to buy the adjacent Ecumenical Christian Ministries building.

This would have made sense in a lot of ways. The 48-year-old building, a staple of countercultural thought for decades, needs $700,000 worth of work that it can't, at the moment, afford. The air conditioning hasn't worked for a long time. Things are falling apart.

The Journal-World ran a story in November with the headline, "Oread Inn developers have eye on ECM." Underneath the headline were the words, "Owner of building has no plans to sell just yet," but there seemed to be an air of inevitability.

One person who ran across the article was local realtor Tom Harper. A little about Harper:

Eight years ago, a pair of houses built in the mid-'50s wouldn't sell. Harper thought the houses were beautiful, but they needed a lot of work. After they finally sold, he wanted to meet the owners, to see if they shared his enthusiasm for mid-century modern architecture.

They did, and then he found more people who were into this style, with its simple and inventive designs, inside-outside transparency, big windows and elegant lines.

He started a group called Lawrence Modern, and now there are more than 100 members who gather a few times a year at someone's house and share their interest. Harper can talk mid-century architecture and design forever.

In the office of his mid-century home, he has a rotary-dial phone and a vinyl chair that he bought for $50 nine years ago at an antique shop in Augusta, Ark. He mentions that it was designed by Charles and Ray Eames in 1956, and asks you to sit in it. This was the item that piqued his interest, and now his house is filled with these things. 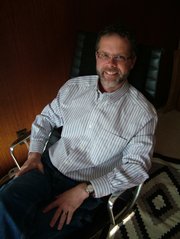 Anyway, Harper saw this newspaper article. And remember, the ECM was built 48 years ago, in 1960, and designed in 1957. A bell rang in his head.

"It's just not valued, so 'let's just demolish it and create something else,'" he says. "It just seemed wrong to me."

He talks about the simple design, the high ceiling and teardrop light fixtures in the chapel upstairs, the beautiful modern cross by the alter, the big, round, funky fireplace in the middle of the main floor.

"There are a lot of beautiful details in that building that only an architect in 1957 would think of," he says.

Harper contacted the ECM and said he thought the building was worth saving. As it turned out, the ECM wasn't happy with the deal anyway, campus minister Thad Holcombe says. The space they would be able to use was too small, and much of spirit of the place would have disappeared with the building.

The ECM board voted unanimously against the deal, and now Harper and some other Lawrence Modern people are working on a proposal to get the building on the state and national historic registers, which would open the gates for tax credits to put toward renovation.

The building isn't eligible until for the register until two years from now, when it turns 50, but Harper is already conducting interviews and researching the historical significance of the building, which has served as a meeting place for countless progressive groups since its inception.

"That building is, I think, the most important mid-century public building in Lawrence," he says. "What else is there? I can't think of anything else that's that significant in town of that era." Â»