Four summers ago, a skinny kid with a big, Dylanesque mop of hair named Patrick Clendenin prepared to head east.

"For a long time I just wanted to go to New York, without having visited," he said at the time, "just because of its reputation for being the city of opportunities and chances for what you dream about."

Clendenin had already amassed a remarkable degree of musical success for a Lawrence High School kid. As the front man for Clockwork and as a solo act, he had opened for big-time indie bands like The Decemberists and The Shins.

And based on his talent for the visual arts, he'd been offered entry into The Cooper Union, a small, renowned private college for art, architecture, and engineering in New York City's East Village, which gives full merit-based scholarships to all of its students.

Clendenin had a retro style, a musical affinity for Donovan, a spiritual affinity for William S. Burroughs, and an old-school soul-pop sound to his songs.

What do you hope to be doing in four years? he was asked on the eve of his departure.

"I don't think about it that much. I don't think very far into the future. I hope that I'll feel like my years at Cooper were well worth it, but I also don't foresee myself becoming a working artist, but maybe some other sort of," he paused, "I don't know, just some sort of visionary, I guess."

In the intense first year, students split something like 20 hours a day between the studio and the classroom-where they study the fundamentals of 3D design, 2D design, drawing, color theory, art history, and humanities. They all live in a dormitory at the intersection of St. Mark's Place and the Bowery, which Cleandenim calls "one of the more insane intersections in downtown Manhattan."

As a sophomore he began to drift toward film, particularly toward old-school Super 8 mm and 16 mm film. 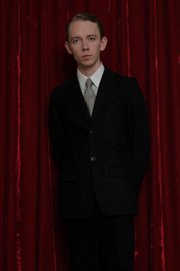 "I just felt like film integrated a lot of different arts," he says. "You have everything from the photography of what you're shooting and the design of what's in the shots-costumes or set designs-and you're also writing a narrative story, if that's the kind of film you're shooting."

For his senior thesis he shot a film on the rooftops of New York called "The Scurimobile," piecing together archetypal narratives from the Bible, Greek mythology, and commedia dell'arte (a type of Italian improvisational theater dating back to the 16th century), and mashing it all up into some kind of narrative-all with no spoken dialogue, on grainy, black-and-white film.

"It's a weird movie to watch, but it is a narrative," he says.

After his second year at Cooper, Cleandenim returned to Lawrence and stayed for nine months, working at Arizona Trading Company and The Merc until he'd saved enough money to pay for a recording session at Black Lodge Recording in Eudora.

Hauling music students from KU and other nearby colleges into the studio, he recorded "Baby Comes Home," an 11-track debut album with a clean, retro-pop sound swathed in strings and brass.

After returning to New York, he talked to several small record labels, and more than a year later the album was released on three of them-one in the UK, one in Japan and one in the United States, where it dropped on Ba Da Bing last summer.

AS A SIDE NOTE, Cleandenim holds a special distinction with lawrence.com: he graced the cover of our first print issue on June 19, 2003 ("Golden Boy-Lawrence Teen Musician Light Years Ahead in Class").

He recently resurfaced on our radar when we received an email (thanks Wilson) about a book of photographical portraits and interviews called "It's Complicated: The American Teenager" by Robin Bowman.

On the cover was Cleandenim, shot in a Lawrence alleyway the summer after his freshman year at Cooper, in a black leather jacket, with his hands in his pockets and a cigarette hanging out of his mouth. His interview reads:

"When my parents got divorced I was about 10 years old and the reason they got divorced was because my mom was, or decided, or found out, she was a lesbian. I'd say that's one of the most influential sort of moments that affected me; it just changed the way that I looked at things, and I think that it caused me to sort of try to grow up faster or to look at things from a perspective that a lot of my peers and classmates weren't looking at that point [:] I think my biggest fear is sex. It scares me."

Bowman found Cleandenim when she was traveling through Lawrence on a nationwide journey in search of compelling teenagers to photograph, and someone steered her toward him.

"It was weird to read the interview and suddenly be three years back in time," Cleandenim says.

Around the time the album was accumulating favorable reviews (even from jaded outlets like Pitchfork, which wrote, "These songs, and Baby on the whole, owe a clear debt to an earlier age of refined crooner pop and elegant soul, yet Cleandenim performs them with the ramshackle ease of, well, a kid with a bunch of talent and a massive supporting cast"), he put together a band and started playing live shows for the first time since moving to New York.

In his Brooklyn loft, he and his band, Living Image (which includes his younger brother and roommate, Stuart), are now recording his sophomore album, slated for release this summer. They're also planning a nationwide tour for the fall, including a stop in Lawrence (sign up for an email alert when the show is booked at lawrence.com/cleandenim).

Since graduating a couple months ago, he's been content working at a French clothing store in SoHo called A.P.C. and making music at night. "The Scurimobile" has had a couple screenings, and he's trying to figure out a way to distribute it on DVD along with the other films he made at Cooper.

"It's been pretty intense lately," he says.