According to a poll released last week, Kansans support the state's recent rejection of coal-fired power plants by a 2-1 margin, and 3 out of 4 Kansans would like to see more of an investment in wind energy.*...The same poll also showed support for solar energy, hydrogen fuel cells, and pretty much anything that doesn't cause cradle death or produce extra limbs in livestock. 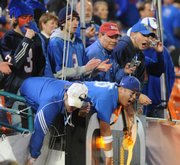 Kansas fans at the Orange Bowl.

The Jayhawks celebrate following their victory.

The KU football team finished its unprecedented season by winning the Orange Bowl last week, defeating favored Virginia Tech 24-21. It was the Jayhawks' first BCS bowl victory in school history and the first time they had even played in a championship series since 1969.*...Not having enough Gatorade on the field to douse coach Mark Mangino following the victory, KU players later airlifted him into a swimming pool filled with celebratory gravy. Also...WHOOOOOOOOOOOOO!!! ROCK CHALK! WHOOOOOOOOO!!!

Forbes Magazine has ranked the KU basketball program No. 8 in the nation on its list of "Most Valuable College Basketball Teams," reporting that the Jayhawk's generated $8.3 million in revenue for the Kansas athletic department last year.*...As an acknowledgement of the ranking, KU will now play all games in full-length Chinchilla-fur coats and refuse to play with anything other than a basketball carved from a single, giant diamond. "Sure it's impractical, but who gives a damn-we make more money than OPEC," said Athletic Director Lew Perkins, although it was difficult to understand him through his ruby-encrusted platinum "grill."

Deciphera Pharmaceuticals announced last week it will not proceed with expansion plans in Lawrence, plans that were at the center of a criminal investigation involving the Lawrence City Commission and Mayor Sue Hack. Commission members-including Hack, who owns stock in Deciphera-met behind closed doors late last year to craft a million-dollar tax handout for Deciphera's expansion, a meeting that violated Kansas law and led to accusations of a conflict of interest with Hack. Deciphera claimed in a statement that it would not be "appropriate" to continue with the expansion in light of the controversy.*...Mayor Hack, asked by concerned citizens if she would follow the lead of Deciphera's act of propriety and resign, stopped laughing long enough to release the hounds.

THE MARTYR THEY FALL

Political and social unrest continues in Pakistan following the assassination of former Prime Minister Benazir Bhutto on Dec. 27. The government of Pervez Musharraf has been accused by Bhutto supporters of attempting to cover up the actual cause of Bhutto's death after officials released a series of contradicting reports, initially saying she was shot, then saying she struck her head because of the suicide bombing, then reverting back to death by gunshot.*...Other causes floated by the Pakistani government include stampeding rhinos, projectile Super AIDS, and-for good measure-a quantum leaping Lee Harvey Oswald.

A nationwide smoking ban took effect last week in France. Fines will run between $100 and $660 for the smokers themselves, and businesses can get hit with fines of more than $1,000. Despite vocal opposition, the ban enjoys a 70% approval rating throughout the country.*...Support for the ban turned quickly to despair once the French realized that without the masking stench of cheap cigarettes they would now have to smell themselves.

A Kenyan policeman in a clash with protesters in the Kibera slum area of Nairobi, Kenya.

KENYA PLEASE PUT DOWN THAT MACHETE?

BRIT TO BE TIED

Britney Spears was forcibly hospitalized last week following a bizarre standoff with officials in which she held her children hostage. Spears was removed from her home strapped to a gurney, with paramedics suspecting her of being under the influence of an unknown substance, and has since lost all custody of her children.*...Toxicology reports have concluded that Spears' irrational and drug-fueled behavior was the result of licking Amy Winehouse.

Cornell University's Baker Institute for Animal Health released a study recently suggesting that sperm could be harnessed to send nanobots or other tiny medical devices coursing through the human body, with scientists saying the whip-like tail of a sperm is an ideal transportation mode for bio-technology.*...Those same scientists were disheartened to learn that a sperm-powered robot has already existed for years, and that her name is Jessica Simpson.