:at 10 minutes to midnight on Saturday, Dec. 29, at Last Call, which recently became a BYOB club after the state didn't renew its liquor license, most people inside did not appear to have booze. The cover charge was $10:

:what follows is an email correspondence between Breaking News and Al-Qaeda, a local band that lists "Religious/Ambient/Crunk" as its genres on MySpace, along with a picture of Osama bin Laden shrouded in sparkling strawberries and butterflies, with a rainbow background:

Breaking News: I'd just like to know how you chose the name Al-Qaeda. 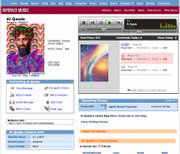 Al-Qaeda: At first it was just to see how people would react to it. Nothing shocks people anymore. We wondered if people would find it acceptable to name a band after the biggest boogeyman to the American way of life since communism. Once you get people to react they can reflect on your decision: why would an art project name itself after a terrorist organization that's become the personification of the very idea of terrorism? We would like people to think about how the government and media have used this phrase, Al-Qaeda, to scare the public into passing the legislature they desire, to watch their cable news reports. Such use of the phrase has made Al-Qaeda into something larger than life, and oversimplifies the problem. Every terrorist group is now Al-Qaeda, every terrorist action is now perpetrated directly by Al-Qaeda. You have to clear your mind to get beyond this image.

Al-Qaeda (follow-up email): Also in some paranoid way you have to think Al-Qaeda has become a kind of taboo thing to discuss openly. Do you think that this email is being red-flagged in some NSA basement computer for later reference or further investigation? It's possible.

Breaking News commentary: Do you think this conversation is being red-flagged in some lawrence.com basement computer for later reference or further investigation? As the Magic 8-Ball says, "Signs point to yes."

-All facts in this story are real. Got a breaking news tip? Email Frank Tankard at frank@lawrence.com.