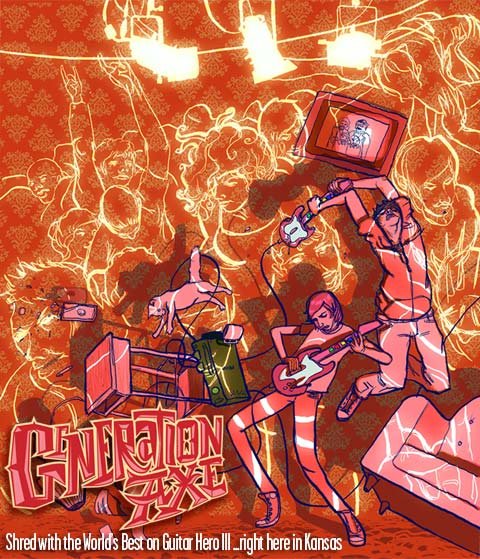 It's 9:30 on a cold Saturday morning and no one is answering the door.

I've traveled an hour to Lee's Summit, to this cul-de-sac of new adobe-style townhomes, to knock on this door, the door of the region's Guitar Hero legends. Another knock. No one answers.

Drew Gutierrez and Marques Watson aren't just the best Guitar Hero III duo within an hour of Lawrence. They are ranked, as of this writing, No. 1 in the world on 'Hard' on Xbox Live.

The driveway is filled with cars. A sign on the door says "Bring food around back." Watson answers his cell phone. "Sorry," he says when he opens the door, it's the fourth annual Lazy Day.

He takes me into the basement and I see what that means. Ten guys lay asleep on the floor, eight or nine video game consoles are scattered around six TVs, and a smattering of half-full bottles of Coke, bags of chips and packages of sunflower seeds line the carpet.

Gutierrez joins Watson, and without saying much they switch on a 65-inch Toshiba flat-screen TV, fire up the 360, grab their axes and shred.

What's with Guitar Hero? You hold a silly toy guitar and press five color-coded plastic buttons as corresponding dots stream down the TV screen. A little kid could do it, on 'Easy' at least.

Like Tetris or Pac-Man, maybe it's the fact that the game is so simple, and that you can always improve your score, at least a little, that makes it something you can play over and over and over.

Guitar Hero III sold more than 1.3 million in the first week alone after its October release, and the spinoff Rock Band, which adds a microphone and drum to the mix, has sold hundreds of thousands of copies at $170 each.

Highlight clip of Drew Gutierrez and Marques Watson on Guitar Hero III. ("One," by Metallica)

On a weekday at Game Nut Entertainment (844 Mass. St.), a teenage boy with long hair walks up a flight of stairs to the game room. The woman behind the counter asks how long he'll be playing. "All day," he says. He heads straight to Rock Band. A girl and boy strum plastic guitars nearby.

Owner Gene Nutt says the game room has essentially been a Rock Band practice space since the day it opened in December. And the customers aren't your stereotypical gamers. "This has a really broad audience," Nutt says. "There aren't a lot of games for, say, girls to play, and they all flock to this."

Of the estimated 15 to 40 people who enter the game room each day, Nutt says about 85 percent come for Rock Band. Part of the reason may be that the game is so expensive (the starter set comes with a guitar, microphone, and drum kit) and that it's best played with a group. And the reason they keep coming back is simple.

"My Curse," by Kill Switch Engage, as played by Drew Gutierrez and Marques Watson via Guitar Hero III.

Gutierrez is 20 and works as a server at Houlihan's. Watson is 22 and works as a directional drilling engineer for Scientific Drilling International, meaning he travels around the country steering an underground oil drill.

But it's in the basement of Watson's townhome-where he and Gutierrez live with two other buddies-that they test themselves against the world via an ethernet cable and Xbox Live.

Gutierrez, who started playing the original Guitar Hero when it came out two years ago, plays lead on a plastic Gibson X-plorer covered in stickers. Watson, who started with the second installment a year later, plays backup.

Watson will be gone for weeks at a time drilling for oil in places like Wyoming, the Dakotas, Texas or Utah. So when he comes home, it's Guitar Hero time. Sometimes they play together eight hours a day.

"One," by Metallica as played by Drew Gutierrez and Marques Watson via Guitar Hero III.

"I'm usually pretty rusty when I get back," Watson says. "It takes a couple days to come back around."

Watson says he dreams Guitar Hero dreams about every night. Gutierrez says when he closes his eyes notes stream down the back of his eyelids.

Watson's ears perk up when the radio plays a Guitar Hero song. Gutierrez even dreams of songs that aren't in the game, plotting out where he'd push the buttons as he goes through each of the riffs and solos.

"I don't get any sleep," Gutierrez says. "It's kind of ridiculous."

They get burned out sometimes, like when Gutierrez stayed up all night playing "Free Bird" until he got a million points. "I hate 'Free Bird,'" he says. They might switch to another game for a few hours, but within a day they're be back at it. They can't stay away. 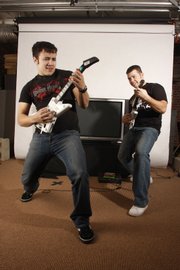 The most brutal Guitar Hero duo within the Lawrence area...and in the world, Drew Gutierrez (left) and Marques Watson.

When the clock struck midnight on October 28, the day Guitar Hero III came out, Gutierrez and Watson were in line at Wal-Mart.

Before dawn they had beaten every song together. They checked the Xbox Live leader board, which totals the high scores from each song. They were No. 2 in the world. It wasn't long before they pulled into first.

In a Guitar-Hero-heavy couple of months, they've been up and down on the leader board. Right now they're comfortably ranked first, under the handle LifeIsAbuse. Take that, Tgisme (No. 2), lindaluhu (No. 3) and Furry Yiff (No. 4).

I ask Gutierrez's fiancee, Whitney Riffe, what she thinks. "I hate it," she says. "Andrew spends a little bit too much time on it. I get a little bit bored." She's supportive though. She bakes them cookies while they play.

I ask Watson's dad, Steve, if he and his wife know their son is part of the best Guitar Hero duo in the world. "Of course we know," he says with a chuckle. "How would we not know?" I ask him if they brag about it to their friends. "I wouldn't call it bragging," he says. "We have disclosed it though."

It should be said that their ranking is not on 'Expert,' the most difficult mode. Still, on 'Hard' they have succeeded where Napoleon Bonaparte failed.

They have conquered the world.

The champs and so forth. Hype. Ballyhoo. Etc.

Scenebooster Soundsystem is just jealous because these guys garnered positive attention trying to be fake musicians, whereas he can't get any attention (of any sort) by trying to be a real one.

whereas you, yakov are just a talentless_in_general prick... who says something like that? honestly... but this article. its just hard for me to take in a "professional video gamer", which is what i guess you would have to call a person playing for over 8 hours a day and whose parents tell their friends about it. i cant really tear the concept down except to say maybe these guys' parents should have shown them outside BEFORE they got hooked on electronics... then again, thats just me

Never understood the Guitar Hero CRAZE. It just looks like a modern day Simon ( http://en.wikipedia.org/wiki/Simon_%28game%29 ). Set to music. With a whammy bar.

I could totally take these guys in Halo.

too cool for school

"professional video gamer" is a real, breathing thing. There's big money to be made, tournaments to win and endorsements to sign. Perhaps party of the appeal is that the actual barrier to entry is far, far lower than in traditional sporting events or professional level game playing (Chess, Go, etc.)

It's worth noting that as a money making enterprise, video games are already eclipsing movies and other traditional hollywood enterprises, and should soon eclipse music sales:

doucebags. if these assholes get laid because of this i advise that humanity rethink the whole 'performance' concept.

jesus h. christ, people. think about him for a second.

it's bad enough lawrence.com (which is such a good welcome tool for anyone who wants to visit a city. of twenty some major cities i have searched online, none have a clear-cut dedication to your physical entertainment why you enjoy your stay. ..and it's so easy to use...asskissing is always fun) placed this terrible work at the top of the screen for a WEEK!?!?!

kill this phase, children. go learn russian. or how to build a tank, or something useful.

i won't lie, i played nintendo like fire plays dead wood. I sold my sega saturn and 10 video-games for HALF OFF A PLAYSTATION 1 (no sense here, folks. just good ol' american commercialism brought to you by Toys'R'Us and some number of third world countries...) I bought/stole/stillpaidfor what might have been the 54th playstation 2 to enter the United States....directly off a truck at wal-mart 3 days before sale. i loved this shit and never got laid and didn't care.

but i had to grow up, see. because kids don't fucking do anything. you eat, sleep, think and shit absolutely nothing. i know. i was there, man. we all were. and a god or future psychiatrist only knows how much crazier it gets for someone actually getting paid for it. (WASTE OF MONEY!!!! STOP BEING STUPID!!!! CURE FUCKING CANCER)

being ranked #1 in the world for this deserves a swift kick to the balls everywhere you turn. no offense to the 'professional video gamer', but i'm never going to be your friend. because you're a damn loser. this all just wasted my time.

Geez, fellahs. Did you guys read the article? One guy in the 'duo' is an engineer. That sounds like a fairly successful job to me. Sounds like he did 'grow up.' He just plays in his free time. And what's wrong with that? As for Andrew, he might be a waiter but the article says that he actually plays the guitar, for you people bashing these guys for being 'losers pretending to be musicians.'