Hometown: Malawi, Africa (Parents are missionaries), grew up in Olathe.

Scouted because: His self-modified slip-on shoes and his smile.

What were you doing when scouted? Trying not to be late to work, but failing.

Favorite stores? I find a lot of stuff in the dumpster behind the Social Service League. I also enjoy sleazy gas stations, and thrift stores in general.

How often do you go shopping each month? As little or as much as I want.

How would you describe your style? Teenage Mutant Ninja Turtles emerging onto Helsinki streets.

Where do you get your hair cut? Usually Kirsten at the Blue Dot does my hair, but I missed my last appointment and my hair looks like a bird's nest right now. 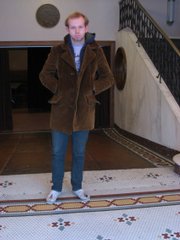 Favorite trend? Really hideous clothing being uncool and therefore awesome. I also appreciate the influence of Abraham Lincoln on fashion.

Favorite coffee shop in Lawrence? This is my world. We live in trying times and we all try hard.

Favorite bar? The Jackpot Saloon. They have decent drinks and one of the best soundmen in town, and I like music.

What would you like to see more of in Lawrence? More rock and roll and more dancing.

Less of? I would like to see less pretentiousness. Less Lawrence cool, and more party, party, party. People should either be booing someone off stage or dancing. I also would like less of the trance music at Wink!

Who are your fashion influences? Mr. Curtis McCoy, MVP. Abraham Lincoln, obviously. I also read a lot of fashion street blogs, usually about ten of them. My favorite is www.hel-looks.com/ which shows street fashion in Finland.

Tell us a secret: In eighth grade I got paid 5 dollars to drink out of the toilet at school. My mom found out and made me drink Listerine.