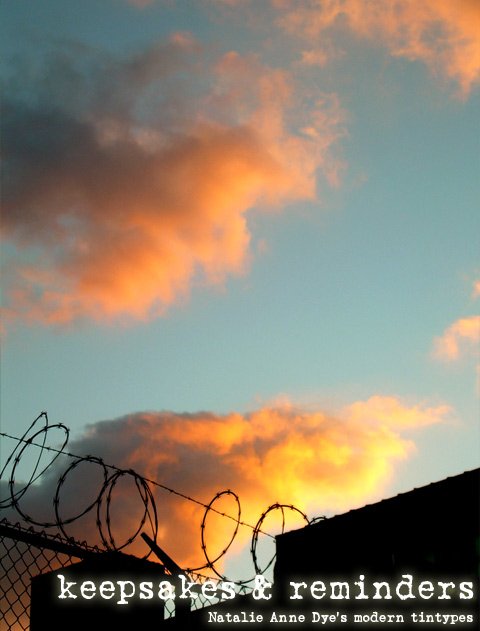 Natalie Anne Dye: "I've always been interested in scale that's been thrown off a little bit."

Twilight flickers behind a shadowy tree. In another, fog quiets a landscape. To see, the viewer must step within inches of each photo, an intimacy not unusual within the close confines of the venue, but requires maneuvering among the literary and social types who populate the Pig. Dye's photographs pack a lot of mood in their miniscule dimensions; the largest is 1.5 inches square.

Natalie Anne Dye: "They're so tiny, like little keepsakes and reminders."

Dreams are impartial, spontaneous products of the unconscious psyche, outside the control of the will. They are pure nature; they show us the unvarnished, natural truth: -Carl Jung, "The Meaning of Psychology for Modern Man"

A sky is a sky is an open, limitless space in which to soar. Or it holds the clouds that carry the rain that feed that tree over there, in that photo.

Natalie Anne Dye: "These could be seen as little fragments of my life. I think other people will look at them and it will conjure certain memories for them."

An old school photographer-i.e., film-this is Dye's first foray into digital. The freedom digital gave her in choosing the composition and detail of the images influenced the small scale of "Remembered Stars." At once individual, Dye's installation uses string to establish mysterious connections.

Natalie Anne Dye: "I want people to share their associations with me, and I think it's easier for people to relate to landscapes than to other people."

Although she is best known as a portrait photographer, the exhibit is void of people. Instead, clouds served as her primary inspiration (which then grew).

Dye is a member of the Cloud Appreciation Society, a booster club of sorts for clouds of all kinds. "We pledge to fight 'blue sky thinking' wherever we find it," the Society's manifesto asserts. "Life would be dull if we had to look up at cloudless monotony day after day."

Narrative intrigues Dye. When she looks at a photo, her mind is drawn to the before and after: What was said just prior to the camera shutter opening? What happened later that minute/afternoon/lifetime?

The strings connecting Dye's photographs encourage an easy community: these are not individual images, alone in the world. They are a collection, images she has seen and preserved to tell a visual story. Each influence and define the others. No (wo)man is an island, and no (one) photo tells the tale.

Natalie Anne Dye: "I like that people have to get up really close to see them, and I like that they're little reflections, little reminders. Everything about them is intimate."