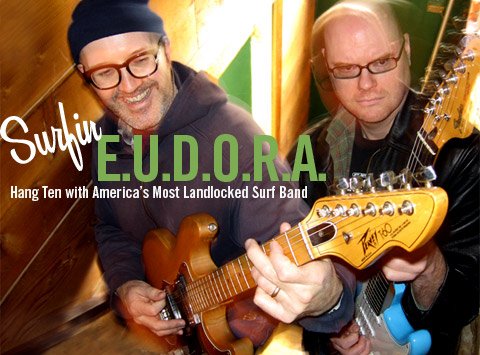 Kory Willis (left) and Jon Harrison of the Eudoras

Though they claim no direct lineage to their eastward municipal namesake, The Eudoras do own one of Lawrence's most distinctive honors: being the first band to play at The Replay Lounge. Of course, given the cock-and-bull yarns typically spun by Kory Willis and Jon Harrison, that could be a load of cockamamie. Same goes for the "30th Birthday Party" for Replay owner Nick Carroll that the band will host this Saturday night (pretty sure Carroll didn't open the joint at age 16:). But a few things are certain: The Eudoras have been playing twangy surf rock for 15 years; they've earned the right to practice once or not at all prior to shows; and Ike Turner wants his whammy bar back. We invite you to eavesdrop as Professor Harrison and Big Daddy Willis contemplate the hairy history of The Eudoras.

Though they claim no direct lineage to their eastward municipal namesake, The Eudoras do own one of Lawrence's most distinctive honors: being the first band to play at the Replay Lounge. Of course, given the cock-and-bull yarns typically spun by Kory Willis and Jon Harrison, that could be a load ...

lawrence.com: What was the occasion for doing a song with William S. Burroughs?

Harrison: Some Micronotz fans wanted to do a tribute album and Mr. Burroughs had written the lyrics for a song that appeared on the red Micronotz album. James Grauerholz decided it would be really cool to have him read it and to have us play a lounge backing bed for it.

Willis: We got paid a sandwich each at the Replay.

Things were different back in the day they had sandwiches at the Replay.

Willis: I got an egg salad. Don't ever eat the egg salad at the Replay if they bring it back.

Especially if it's the same egg salad.

Harrison: The Squishy Burgers were good. I ate a number of those.

Willis: They were steamed, not fried steamed hams.

Harrison: It was a process that was really ahead of its time.

What instruments do you guys play in The Eudoras?

Do you have a record out or anything like that?

Harrison: Our recording history is not good.

Willis: You can't capture the magic. It's like seeing a unicorn.

Harrison: We never seem to record during a period when we're actually busy playing a lot of gigs. One of the worst-kept secrets in the Lawrence music scene is that I don't play guitar terribly well. Consequently, when we try to record I don't deal with the pressure very well : I can pull it off live because there's enough extraneous noise in the bar.

Have you talked to Jon about that, Kory?

Willis: We've tried recording without him, but he always finds out and destroys the tapes. He's very temperamental when he drinks.

(Referring to the song "Farewell Lorena") That was from the "Live at Worlds of Fun" album, right?

Willis: After we played, we backed up Chuck Berry.

Harrison: Kory spent some time on a cruise ship when he was in high school playing guitar during the summers. This song is reminiscent of those experiences.

Willis: I was a shuffleboard pro.

Willis: It was awesome if you like old ladies. Do you?

I don't know. I feel trapped by that question.

Willis (in some kind of mock voice): We found a recording where the senator says he does not like old ladies.

Harrison: The hunter is now the hunted.

This is why there are no vocals in this band, I guess because this is what you'd end up with.

Harrison: It could be worse Bill (Colburn) could be here.

What does Bill do?

Harrison: Bill is the guy in the band who says, 'That's what she said' after anything anybody ever says at any point ever.

You've played a lot of shows at the Replay.

Willis: We were actually the first band to play at the Replay.

Harrison: That is true.

Willis: I don't think they intended to have live music. Our original bass played Brock used to have this magical power over Nick (Carroll, owner of the Replay), and anything he would suggest Nick would pretty much do. We were just sitting at the bar once this is before the Replay was the juggernaut that it is and Brock said, 'Nick, you should have live music here.' Nick was behind the bar going, 'That's not a bad idea.'

We had our own drink. The Eudoras shot was Yoo-Hoo and vodka.

How does that taste?

Harrison: It's not so bad. You know the chocolate martinis at Tellers? It's not as good as that.

You guys are mostly an instrumental band?

Willis: Yeah, a couple years ago we had an open mic at the Replay that turned into a free-for-all.

Harrison: I would just like to go on record as saying to anyone who was at that show: I'm really sorry about that, and, in the future, we will not be turning over the microphone to drunken frat boys who want to sing "Jessie's Girl."

I believe nothing in this interview. Not a word.