You've been involved in political activism for a while-hell, you were even in Student Senate at KU. Having worked behind the scenes in political theater, is it more depressing or infuriating, or "depruriating"?

"Local activism is always interesting and frustrating, or 'frusteresting.' There are a lot of good people with a lot of large hopes. At the same time, there is a gigantic lack of imagination among many of the activists. Political outrage is always expressed as a march, a letter, or a crappy folk song. : New tactics and approaches are needed, desperately. I was involved in the KU Student Senate for two years. There were quite a few good intelligent people. The grand majority, however, were quite the opposite. Student Senate was one of the most infuriatingly depressing experiences of my life. It was watching the 'future leaders' of our country, and seeing them for what they were. Petty, entitled, egotistical, selfish, power hungry, and generally unimpressive people can be harmful on a very personal level. At the end of the second year I stopped going because I was beginning to feel a real hatred. I quit to save my faith in humanity."

How did you first get involved in politics?

"I have pretty much always been politically interested, and involved when I can be. One of my earliest memories is of watching the Reagan/Carter debates on a small black and white TV, perched on the arm of my mother's yellow corduroy sofa. I was three and had very little understanding of the world, but even then I could tell Reagan was a real douche bag."

"There are a thousand answers to this, but the best and overarching one is face-to-face interaction. Meet the bastards. Get them to recognize you personally. Make sure they know you are watching them. This is what every citizen needs to do-establish personal relationships. I enjoy sitting in public areas during election season. Politicians make walk-bys, hoping a cheap smile, a wave, and a handshake will fool everyone. I shake their hand, then grab it with my left hand, too. I make it a good two-handed handshake, then I do not let go. I look them in the eyes, ask questions, and demand answers. Dennis Moore actually began to visibly perspire while slithering around trying to say what he thought I wanted to hear. Great fun. I recommend it to everyone." 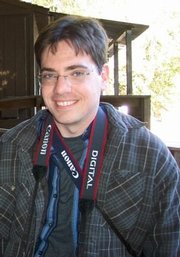 "This should be a contest, but it's not-Phill Kline. Forget that the man is a horrible human being for a moment-my reaction to Kline was purely visceral. When I shook his hand it was cold, clammy, sweaty, and-in a word-slimy. He oozes. I actually went and washed my hands afterward. My favorite local politician would have to be Mike Rundle. He is a good guy who actually wants to help the community, which is a rarity in politicians. And he does a dynamite Kermit the Frog impression-or did 25 years ago."

"If it is possible, both. I disagree with their ideas of anarchy, but I am in favor of many ideas being alive and well in the debate. My personal irritation with them is that they are usually out front in any demonstration with a large, stupidly simplistic sign. They generally look like refugees from Mad Max and make sure the camera can see them. If you are going to march for your beliefs, go for it, but allow for a multiplicity of beliefs. Don't try to take over a rally. With the anar-kids out front, a large part of the population just thinks 'Stupid punks,' and then goes out to use their gas-powered leaf blower on their SUVs. Meanwhile, the college professors, blue-collar workers, local artists, and everyone else who joined the march goes unnoticed. They are counterproductive to progressive causes, and ineffectual in their own."

Now that we're full-on into a presidential election, is this total overload for you? Like the Super Bowl filled with meth, only every day?

"I am an addict. Of course I am enjoying it and currently have KCUR directly injected into my neck every hour. Occasionally I take a shot of CNN through the eye. You have to do it through the eye, because it is hard to drink and laugh at the incompetence at the same time. The Republican race is far more fun this time, as nothing will be settled easily. A veteran, a preacher, an actor, 9-11 man, and an animatronic escapee from Disney's Hall of Egotistical Imbeciles walk into a bar-yes, it is a joke. The Democrats are the usual ineffectual mix. Just remember that a Machiavellian conservative woman, a generally ineffectual half African man, and a very rich white guy who talks class war will save us all! Again, we all play the 'Who do I detest least?' game, only this time desperation has put us in a state of complete denial. I, for instance, have decided I dislike Obama less than Clinton or Edwards. The only question that remains is 'Can I vote for him without feeling guilty?' No, I cannot. Will I? I have no idea."

Is there any hope at all that change can be brought about by us little people? Tips for aspiring agitators?

"Demand interaction. If nothing else, send off a weekly letter to all your representatives. If you see a candidate or elected official on the street, stop them. Talk to them. They wanted to represent you, they had better make time for you. That is the price of power in a democratic society. Demand coverage of issues, not personalities. The major media outlets have much to gain in this election and are putting up a smoke screen, too. Turn them off. Listen to public radio, read things like the Guardian UK, and the BBC. If you speak a foreign language, check out some media in that language. Yes, we live in a country where you have to read other countries' media to understand what is happening here. Finally, and for God's sake, think. You have a brain-don't take anyone at their word. Research old votes, speeches, positions, etc. Pundits, candidates, and media personalities are, at their core, completely full of it. You must do the leg work."