"I try not to eat out too much. I go to the grocery store and try to cook as much as possible, but I've bought frozen pizzas plenty of times. I'll cook a big Sunday feast, like enchiladas, then freeze the leftovers and eat them for the rest of the week. At least, I think it saves me money until I get tired of eating in every night and then go out. I also want to try and ride my bike more often, but then I don't. Do nice thoughts save money?" 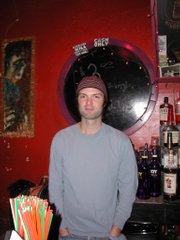 How do you splurge money?

"eBay. I'll go through phases of being bad about it, like getting sucked into searching for the kind of drums that fit on my set. I'll think I need to get add-ons and get obsessed with these things. I successfully bid on an extra tom that's more in the vein of a heavy metal drum that I'm not even going to use a lot. It's kick ass, though. I also recently purchased a van on eBay. I was scared as hell when I clicked on the 'Bid' button and ended up winning it. I spent a couple grand of my student loan money. I had to fly to Arizona and then drive it to Lawrence. It was grueling. The van made the trip, though, so everything worked out."