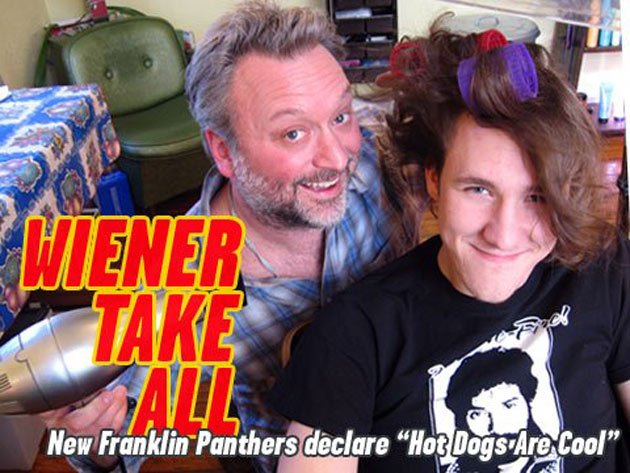 Other than 18 years and hundreds of Paw shows, there ain't a whole lot separating the musical persuasions of Grant Fitch and Jason Jones. The duo that now composes Lawrence's New Franklin Panthers met while working at Mass. Street Music and quickly hammered out a malleable setlist of instrumental power-rock. Channeling the bowel-shaking sonic sludge of Blue Cheer and the driving angular riffs of Mission of Burma, the Panthers collected a year's worth of material into a three-movement opus titled "Hot Dogs Are Cool." Clocking in at 50 minutes, the album collects shards of spontaneous inspiration as conceived by two hot-dogging rock musicians. In other words: Kobayashi (the Japanese competitive eater) would totally puke his guts out.

Other than 18 years and hundreds of Paw shows, there ain't a whole lot separating the musical persuasions of Grant Fitch and Jason Jones. The duo that now composes Lawrence's New Franklin Panthers met while working at Mass. Street Music and quickly hammered out a malleable setlist of instrumental power-rock. ...

So you guys have a real wiener of a new album here.

"Hot Dogs Are Cool: In III Movements." Is that really the title of the record?

Fitch: It really is.

Jones: That's not a joke.

Fitch: It's an instrumental band, so the titles often are silly nonsensical things. For a couple of shows we were actually making up titles on the spot, which was kind of difficult to keep track of. I'd have to turn to Jason and say, 'Wait which one is this?' : The live show is more performance-oriented, and it can get kind of drunk.

I was kind of feeling a homoerotic White Stripes thing.

Fitch: It's kind of like two hobbits on a journey to throw the ring into the fire. ...You get onstage and people who are uninitiated look at you sort of like a dog hearing Beethoven. By the end of it, pretty much everyone's sold.

How did the record come together?

Jones: So many recordings these days are bands that spend 45 minutes on a 30-second guitar part. In the past, bands would go in and track stuff live and honestly perform their music. We wanted to subscribe to that whole ideal.

Fitch: It's kind of like the first time you develop a picture in a photography class. Photography is this magical thing and you're taking all these pictures; then you develop your pictures and you go, 'Oh, that's not that interesting.' That's kind of how recording is for me I want to go in and knock it out and move on with my day and my life and different music.

You two lovebirds met down at Mass. Street Music?

Fitch: He coaxed me out of early retirement from my previous rock stardom. I'd found myself in a lot of basements and practice spaces over the last seven years, and nothing was ever that interesting and there was never chemistry.

Did you actually have a sense that you were out of the game?

Fitch: Yeah, self-imposed exile. It just wasn't that interesting to me treading down that careerism road of record labels and booking agents and trying to make a living at it.

It's cool to see you and Mark Hennessy (also formerly of Paw, now with 1950 D.A.) both playing in Lawrence again.

Fitch: I think we're going to be playing a show with them in the near future. We're both older, we both went back to school, we both have kids, we're both married. A lot of huge life changes have pushed us in similar directions. Getting back to music seems like a real natural thing.

Fitch: Initially, about 50 percent of the set was improv not in a weird sort of Wakarusa way, but in an old-school '60s Band of Gypsys way. I kind of miss that actually. It's firming up now that we have a proper record. We were practically the house band at the Jackpot and Replay this summer.

Fitch: Those guys have been great to us. What's going on down there is a really good scene.

Fitch: 18. I introduce him onstage sometimes as my son. ... It's kind of amusing in a lot of ways, but music is such a great vehicle for bringing people together. When we sit down and start playing : all the other bullshit kind of fades away and there's a real connection. That's why we've been really conservative in our efforts to find other people to add.

How do you get that huge sound onstage?

Fitch: Jason's got this enormous drum set that actually looks like somebody is sitting in a huge pickup truck. I have a couple really loud amps. I'm kind of a Les Paul into a Marshall guy.

Do you have a massive tom rack?

Jones: No. I don't adhere to the whole rack thing.