The Victor Continental Show has been lauded with many superlatives over its impressive decade-long run. This intrinsic pillar of the Lawrence arts could alternately be described as a raucous variety program harkening back the heyday of Vaudeville, or as an incisive sketch comedy revue satirizing our culture's innumerable foibles ...

The Victor Continental Show has been lauded with many superlatives over its impressive decade-long run. This intrinsic pillar of the Lawrence arts could alternately be described as a raucous variety program harkening back the heyday of Vaudeville, or as an incisive sketch comedy revue satirizing our culture's innumerable foibles a la Swift or Voltaire. But perhaps nothing captures the essence of The Victor Continental Show with more precision, or more insight, than labeling it a "Tijuana Crime Scene." "Google that shit," suggests Andy Morton, writer and performer with Victor Continental, for the intellectually curious. "But don't click on 'Google Image.'"

Now that you've either been fired for looking at NSFW material or are inappropriately aroused, it's time to look back upon this venerable venereal institution that has Rusty Tromboned its way into our hearts. Culling talent from all quarters of the Lawrence theater and comedy scenes, The Victor Continental Show probably had no idea that its unique cocktail of lewd puppet shows and raunchy comedy skits-all of it presided over by a fictional, booze-swilling bon vivant who lends his name to the whole affair-would last 10 years beyond its inauspicious start in 1998 at The Varsity Theater (a venue it outlived, incidentally, as the space is now Urban Outfitters). "Some of the sketches were horrible at the very beginning," admits founding Continental Kitty Steffens.

Not that they didn't make the best out of an awkward inception. "We were the second- to-last show at The Varsity before it became Urban Outfitters, and it had absolutely no backstage space, so the entire cast was just out in the alley with 12-packs of PBR, starting a tradition which has served us well in the ensuing 10 years," fondly recalls director and writer Will Averill.

That dedication to craft and shit-facing carried over to Liberty Hall, which Victor Continental has called home for the duration of its run, and which conveniently allows audience members to get just as drunk as the performers. Victor himself-played by the inestimable Jerry Mitchell since the beginning-encourages this game of one-f*cked-upsmanship by challenging viewers to drinking games throughout the performance. "The one fun thing about it is that everyone gets so ham-towned that it's provided us with some entertainment," says Morton. "We're having enough fun doing the show, but when fistfights break out in the balcony it's even better."

Steffens remembers, "My favorite was, after one of the Saturday night shows when we were all striking and packing everything up, then looking up and realizing there was still a dude passed out in the balcony." Adds Morton, "I remember one show where there was a dude passed out in Victor's chair. It was Victor. I don't think at any point we had ever sat down and worked out a battle plan for when the star of the show passes out."

Explains Steffens of their emcee's face-plant, "Jerry was getting ready to have back surgery in a couple of days, and the only way he could function and walk was to have these pain pills. He had taken some the night before, and after about three goblets of box wine he couldn't keep his head up. But, God bless him, he danced with a broken back!"

The incident has become a bit of a Rorschach test for Victor Continental fans-or at the very least a field sobriety test. "After that whole experience, I still try to feel people out who were at that show-not feel them up-as to whether or not he was acting, and it's still about half and half," puzzles Averill. "Some people thought he was just pretending to be really drunk." 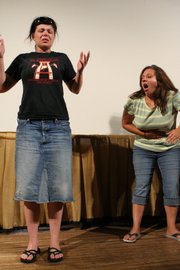 "Those audience members were obviously crocked," surmises Morton. "Because they missed the part where he yelled out, 'Jerry's drunk!'"

To blame these sort of character-breaking bloopers entirely on intoxication would be to dismiss the cruelty of fellow cast members. "I realized that Jeremy Auman, one of the cast members, has a hard time not laughing. It turned into actively trying to make Auman lose it onstage," cackles Morton. "He literally fell out of his chair one year, and I don't remember exactly what I said, but I believe it was the phrase 'Eat a bag of dicks.'"

Speaking of eating unpleasant meat, that recalls another favorite anecdote from Victors of yore. "There was a scene that Kitty and I were in back when the Atkins diet was in full force," Averill says. "We decided it would be funny-well, I decided it would be funny-to do a sketch about the Atkins diet that consisted of two people, because it's just such a conspicuous consumption diet where you eat a lot of meat to lose weight, eating as many burgers as we could onstage. Now, it may have been funny if there was something else to the sketch, but we kind of ran out of time and didn't write much of it. The whole sketch consisted of 'We're on the Atkins diet!' and then trying to slam a plate full of hamburger into our mouths." 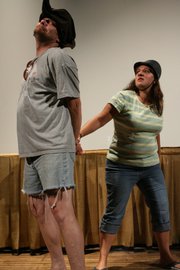 "It wasn't just a plate full of hamburger," corrects Steffens. "It was, like, 27 cold Bucky's hamburger patties."

"So we're just trying to get as much of these into our mouths as possible and just trying to make it funny," continues Averill. "The audience is not buying it at all-the crickets are chirping. We're trying to stuff more and more of it in, thinking, 'Maybe if I eat enough of them for you, it will be funny. When will it be funny? Please, God, make it funny!' And it never was. Finally, choking on cold, cold, Bucky's hamburgers, we slunk off backstage to polite applause. We cut it the second night."

Since no one has yet died of bovine encephalopathy or alcohol poisoning, the makers of Victor Continental have taken this as a sign of providence to continue. Their upcoming sextravaganza, "Victor Continental X," is being touted as a rebooting of everything that has made Victor such a well-oiled, pant-wetting machine. Gone will be many of what the writers refer to as "crutch sketches"-those recurring characters that make an obligatory appearance each year-freeing up the team to explore new avenues. That means fewer insider townie sketches based on Lawrence minutiae and more brand-new material. Don't worry-certain faves such as Shitty Deal Puppet Theater will be regurgitated, but everyone seems much more excited by the shiny new sketches in this 15th installment. "It's gonna be fucking funny," promises Steffens. "I can honestly say that there have been some shows in the past where I'm like, 'Eh, it's kind of funny.' This is fucking funny."

The Victor Continental cast and crew point to many factors for their improbable longevity-the creation of an iconic character in the form of Victor and Jerry Mitchell's inimitable take on him, having the trappings of a once-a-year event, a loyal fan base ("No one ever leaves this f*cking town, so we're guaranteed to sell out for the rest of our lives," says Steffens), and generally just a lot of talented people who like working with one another. "We do it because we enjoy it," fesses Morton. "The audience is having a good time-and it sounds cheeseball as shit-but nobody is having more fun in that room than the cast is, and that's why I think we keep doing it."

Highlights from the 2005 Victor Continental Show

Such camaraderie is touching. "One of the things I love about the show is that you can be guaranteed at least once a year that there will be a female boob coming out," wistfully muses Steffens. Touching indeed.

To Averill, after much soul searching, the Victor Continental Show evokes only three words. "SeÃ±or Wolf Crotch. All I can say is that if you haven't seen it, you've really missed something."

The Victor Continental Show has, for 10 besotted years, entertained and thrilled us with its Tijuana Crime Scene of ribaldry. We've laughed, we've cried, we've danced along with SeÃ±or Wolf Crotch-can it last for another decade? "As long as Jensen Liquor store is open," promises Morton, "we'll be there." Â»

As unintentionally funny as "The Turnpike"? Impossibly high standards, my friend.

doesn't "sketch" denote some sort of rough plan? and gavon, you can loosen up. i think you've earned your free tickets by now.

maybe this will be the year they get funny.

Don't you tell me when I can stop sucking off for freebies, von Buzzkill! And I was just kidding about "The Turnpike"...I don't even watch that crap, so I have no idea if it's funny or not."1 on 1 Trivia," however...now there's a fine program. That Andy Morton sure has charisma...and looks. He's a latter day Bob Eubanks, just without all of that homophobia and anti-semitism. Sigh I sure hope I get a chance to appear on his show, and I sure hope that he reads this so he knows who his REAL friends are.

Listen, guys, if you need to solve some sort of latent Channel 6 show host attrativeness competition, take that shit to Hot or Not. Otherwise, can't we all just get along?p.s. My mom is really mad with both of you. She's unsuscribing from Cablevision.

it's like watching two retarded kids fight over a broken toy.

as the indie-rock bob saget, i think it's MY job to suck up to the modern-day bob eubanks. one day, say july 17th, i too will appear on 1 on 1 trivia, and although my failure will be historical, at least there's a chance it may be entertaining, unlike your blogcast or whatever it is.

Gavon, lighten up on Tim. He just heard that we're doing the 'Lawrence's Biggest Douchebag' sketch this year, and he's angling for an award.

UKept, apologies to your mom, but a boycott of the World Company only hurts us little people. How will Jayni keep her kitchen stocked? Will Kevin Romary wind up on the streets, sportscasting to passersby for spare change? Will Andy Morton be reduced to drinking rotgut Mogen David wine out of plastic cups...oh, wait, he already does that. riddy_hiz, those in glass houses shouldn't throw feces. Hugs!And Tim, don't flatter yourself with the Bob Saget analogy. You're more like the indie-rock Jodie Sweetin. Scratch that, you're more like Jodie Sweetin's meth mouth. Put that in your festering gum-holes and smoke it!

my gum holes are not festering.riddy. . . if you count UKept, there are three retarded kids in the argument.

retarded kids arguing over broken toys? why... they are retarded, they dont know it is broken. to them its as good as new. they just bang it against their head as if it were new out of the box. and tims gums arent festering, but his pee hole is.

Howdy -- I can clear up the rumor that von Holten left the Friday night show in a huff.Didn't happen.Feel free to carry on with further insults. He can take it, he reports.