The University of Kansas won the lawsuit brought against clothing retailer Joe College.com this week, with a jury awarding KU $127,00. KU, who had been seeking nearly half a million dollars in damages, successfully argued that certain unlicensed Jayhawk-themed memorabilia sold by Joe College.com illegally used school colors and tarnished the university's image with shirts baring such phrases as "Muck Fizzou" and "Our Coach Beat Anorexia." *:Next on the docket for KU, a trillion dollar lawsuit against the United States government for the use of red, white and blue in numerous unlicensed flags. France has already surrendered to a similar lawsuit. 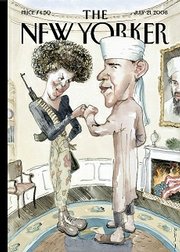 The Reverend Jesse Jackson created a stir last week when, after appearing on Fox News and not realizing his microphone was still on, he said of Barrack Obama he wanted to "cut his nuts off" for "talking down to black people." Jackson quickly apologized and reiterated his support for Obama's campaign. On the Republican side, John McCain was forced to distance himself from his senior economic advisor, Phil Gramm, when Gramm told the Washington Times that the United States was full of "whiners" and that the country was only in a "mental recession." *:Jackson's threat of castration was rendered moot, however, as Obama had already been emasculated by his wife on "Access Hollywood." In the McCain camp, Phil Gramm defended his comments. "Fannie Mae and Freddie Mac nearly collapsing? Mass hallucination. The IndyMac bank failure? Weather balloon combined with swamp gas. Losing your job and house? It's because Jesus saw you masturbating, you sniveling pussy! Now-who wants more deregulation for the predatory lenders that pay me millions of dollars to lobby for them?"

Actress Angelina Jolie gave birth to twins last week in southern France. Knox Leon and Vivienne Marcheline are the second and third children born to Jolie and Brad Pitt, who also have three adopted children. *:Jolie is reportedly thrilled since this will be the first time in her career that photographers yelling the phrase "Show us your twins!" won't have a lewd connotation.

Former White House Press Secretary and Fox News anchor Tony Snow passed away last week after a long struggle with colon cancer. He was 53 years old. *:President Bush eulogized his onetime spokesman. "I can imagine Tony at the pearly gates right now, being asked by old St. Peter why he deserves to enter heaven, and Tony answering with a condescending and obfuscating non-answer that will turn it around on the questioner and call into question his patriotism. It helps if you picture St. Peter as Helen Thomas with a beard. It's freakin' beautiful."

Belgian brewery InBev bought American beer giant Anheuser-Busch, the St. Louis based institution responsible for Budweiser and Bud Light, for $52 billion this week.*...The take over has angered many politicians and anti-globalization activists who feel this is an affront to the proud American tradition of making horrible, horrible beer.

Iran conducted a missile launch last week as a show of force against what it deemed hostile maneuvers from the Israeli and American armed forces, but was embarrassed when it was revealed that the official photo of the launch released by the Iranian Revolutionary Guard was digitally altered to include more missiles. *:Also coming under suspicion from Photoshop experts was an image of Iranian president Mahmoud Ahmadinejad driving the Batmobile, with Jessica Alba and Chewbacca in the passenger seat, blowing up the entire nation of Israel under the caption "I CAN HAS HOLOCAUST?'"