Zines? Really? Didn't the internet do away with this medium like penicillin did with my rash? Why salvage this bastard of publishing from the scrap bin of history?

"Like your lichen planus rash, I suspect the zine medium's impossible to kill with conventional techniques. The Internet's had a noticeable impact on the zine scene-there are a lot of people directing their energies toward blogs and web sites that might've been started up zines ten years ago-but in a lot of critical ways, especially aesthetics, the printed word and the electronic word are completely different propositions. One of our favorite papers to print on is embedded with tiny flakes of freeze-dried paper, so that each page looks like a miniature snowstorm when you rock it back and forth in your hand. That kind of effect's impossible to render with flash animation or the 3G iPhone. It's also very difficult to fold up a web page and put it in your back pocket, and risky to read one while lounging in a bathtub."

How exactly does one go about printing a zine? Is it just as simple as printing out your insights into the Season One box set of Dr. Who and/or your hatred of immigrants, reproducing them at Fed Ex Kinko's, and then annoying record store owners until they let you leave a pile of them next to the register?

"Yes, it's a simple as that-if you want it to be. The folks behind 'Johnny America' are devotees of 'the object,' so we tend to be a bit more elaborate-silkscreen colors, bundled mini-comics, glow-in-the-dark inks-but all you really need to make a zine is a magic marker, a few sheets of papers, and a couple of dimes for the copy machine." 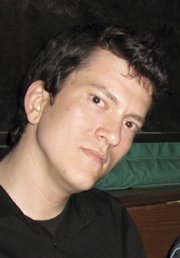 Who the hell is Johnny America, anyway? Is he some sort of anti-technology hermit who builds mail bombs and bangs out manifestos on a manual typewriter?

"Johnny America is a large rabbit, about three and a half feet tall. He lives in a bungalow on the Moon between the Mercer and Mancini rivers, the famous lunar wine rivers-the first red, the latter white. He's also the namesake of our print zine. I know you're a doubter, Gavon, but like Lou Reed-rightly-or Bob Dylan-wrongly-moon rabbits are very real creatures despite their ascension into myth. Johnny's great-great-grandfather was quite famous in China."

How do you recruit writers for Johnny America? What sort of unique blend of sharp wit, literary talent and misanthropy is required for this gig?

"I'd say wit is appreciated, talent required, but misanthropy actively discouraged-who's got the time for that nonsense? We do not. Good legs are nice, but so few of our contributors send us pictures of those that I can't go so far as to call shapely calves a requirement. We're fortunate-we solicited items for our first two issues, but ever since, our contributors have found us on their own. A writer in, say, Chicago will list 'Johnny America' in their publishing credits, another in the U.K. will notice, track us down, submit a piece of their own, list its publication on their web site, and so on and so on."

What cocktail is best paired with an issue of Johnny America?

"Probably the best general cocktail pairing is with the Moon Rabbit Cocktail, a slightly modified version of the Bobby Burns cocktail adapted by Mr. Aaron Grill:

I've always thought that our Halloween issue was complimented by a 'Lucky Jim,' invented by Kingsley Amis, and that our latest issue matched well with an 'Old Fashioned.'"

Zines-a final, ironic "f*ck you" to the environment? Are they keeping tree killing hip and relevant?

"To paraphrase a cartoon I once read, I don't consider the Earth an enemy, but it's not exactly my friend. Do you remember the microburst a few years ago? 'Gaia,' the 'earth mother,' smashed one tree through my living room floor and dangled another a few inches above my Honda. If the earth loved us, it wouldn't attack with such regularity. If trees, Gaia's foot soldiers, see fit to assault my property, I figure we're justified in fighting back."