Ted Nugent is insane. He is certifiably bat shit bananas. And he is an American treasure. This axe swinging legend has bludgeoned his way to the top of the rock pantheon, selling more than 35 million albums, playing over 6,000 concerts, and pissing off nearly everyone on the planet in the process. When not penning such romantic chamber pieces as "Cat Scratch Fever" and "Wang Dang Sweet Poon Tang," Nugent is an avid hunter and proud, flaming conservative. He revels in mortifying PETA and demands that every man, woman and child own the biggest f*cking gun that they can carry. He recently created a bit of a kerfuffle when he suggested that both Barack Obama and Hillary Clinton could suck on the rifle he was brandishing during a live performance. His charm and tact are on regular display in several books, a column he writes for the Waco Tribune, and even on the big screen, where he'll be seen in the feature length Toby Keith vehicle, "Beer for My Horses" (and, no, we didn't make that last part up). The Nuge was kind enough to answer a few questions via e-mail while touring Europe in anticipation of his Kansas City concert.

lawrence.com: Since we're a Lawrence publication, I'm obligated to ask if you've ever been to our fair little burg of liberal arts and KU basketball? Impressions of Lawrence or Kansas generally?

Nugent: "I have proudly slam-jammed the stunning width and breadth of the Kansas heartland nonstop since 1967-and I ain't even warmed up yet! Not only do I dearly connect with Kansas rock-n-rollers, but my All-American Spirit of the Wild Blood Brothers of the mighty Kansas whitetail deer back-strappers and I have quite the spiritual relationship. We are BBQ Blood Brothers, as well."

You recently crossed the 6,000 threshold for live performances-do you even have fingers anymore, or are they just smoldering stumps at this point? How do you do it? Are you just motivated to make the Rolling Stones look like pansies?

"I accomplished the Stones-to-pansies goal back in 1974, the mighty Mick Jagger notwithstanding! He is a true R&B legend hero, for sure! In the sheer vitality and black soul music energy department, clearly I have no equal. Not bragging, just fact. At the tender age of nearly 60, my craving for and delivery of the ultimate power music beast is at an all-time high. Surrounded by Mick Brown on drums and Greg Smith on bass, I am living every guitar player's dream each night! Thank you, Lord!"

You're touring Europe at the moment. Maybe this is just my cultural ignorance, but it seems like the Netherlands wouldn't necessarily be a natural fit for your particular brand of balls-out rock and kill-'em-all-and-let-Ronald-Reagan-sort-them-out politics. Does "Wang Dang Sweet Poontang" translate to Dutch?

"God indeed created all men equal. Sadly, certain governments deny the exercise of such autonomy and defiance. Therefore, Europeans are driven beyond their wildest dreams to witness an ultimately free man remind them of what freedom looks and sounds like and can do for a ruggedly individual human being, especially with a roaring Gibson guitar and a totally unleashed irreverent piss and vinegar band at his side. They can dream through my music and attitude. It is a beautiful thing."

Who would you rather go hunting with, Obama or McCain? Surely either of them would be safer than Dick Cheney. What are your thoughts on the presidential election thus far? 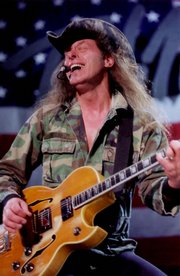 "I am always pleased to share the Great Spirit of the Wild with anybody anywhere anytime. Both John and Obama desperately need spirit campfire time with their Uncle Ted. I would gladly provide each of them a very touching refresher course on we-the-people-self-evident truths and how to bring the sacred U.S. Constitution and Bill of Rights back to the fore. Both candidates leave much to be desired. I am on it."

You're virtually neighbors with George W. Bush down in Crawford. Ever have to call the cops because he's partying at all hours with Putin? Noise complaints aside, how would you rate President Bush on his job performance now that he's about to leave office?

"President Bush is a good man. But what America desperately needs is a great man. Mike Huckabee is a great man, sadly too great for too many Americans to admit. Political correctness has embarrassingly neutered much of America and nearly all politicians. It ain't right."

You've flirted with running for elected office in the past-any plans for the future? What would a "Vote Nuge" campaign look like?

"I am a nonstop, we the people participating activist, turning up the heat constantly on elected officials who are supposed to work for we the people. I have sincerely threatened to run for public office in the past, but must confer with my campaign manager, Mrs. Nugent, before making it official. I would stand unmovable for logic, fairness, common sense, goodwill and decency with the Golden Rule, the Ten Commandments, U.S. Constitution, Bill of Rights and Declaration of Independence as my bibles for policy making. America is still by far the last, best place. My new Regnery book, 'Ted White & Blue: The Nugent Manifesto,' will be unleashed in October and spells out the surefire path to guaranteed quality of life upgrade for America and the world. Read it and let's get it on." Â»