Here There Be Monsters

Artist Molly Murphy goes grotesque for a good cause

If you're acquainted at all with the Lawrence art scene, you're more than likely familiar with the work of Molly Murphy. Her paintings of femme fatales in various states of distress-and various states of undress-are unmistakable.

Murphy's latest solo show, a First Fridays outing in Kansas City called "Monster," is a bit of a mutation from that norm. While these new pieces still feature her distinct female forms, they've now been transmogrified into half beast/half beauty representations of creatures both mythical and modern.

The cause for which they're being exhibited, however, is as noble as the subject matter is macabre. Half of the profits from the show will be donated to the GaDuGi Safe Center, a Lawrence non-profit dedicated to helping the victims and survivors of sexual violence. These donations will be made in the name of the recently departed Jana Mackey, herself an advocate for the abused and forgotten.

Molly Murphy sat down with us to discuss her decision to dedicate "Monster" to Jana Mackey, as well as much lighter topics ranging from nipples to ass-kicking nuns.

lawrence.com: Is this show pornography from the Island of Dr. Moreau?

*Sigh* Fine. Then please describe the show-and use as many psycho-sexual, post-feminist terms as possible.

I don't know if it's so much a "psycho-sexual, post feminist" ideology. It's actually more based on the fact that we have monsters possibly dating back to cave drawings-sort of strange animal/human hybrids-all the way through to modern freak shows, to monster movies, to religions that always have some sort of demon character that you're supposed to be afraid of. They all generally identify with the anxieties of humans. So in this show I've made them all female, and kind of based the characteristics of the animals on anxieties and the various ways we see ourselves and how other people see us. It's not all personal identification, but also ideas put upon us by other people. 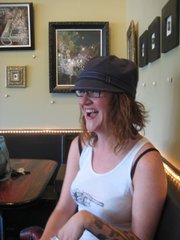 It's specifically focusing on how women are perceived and how they view themselves. How is that reflected in the show?

A lot of where I began is more the qualities of the animals I chose and how they're used in popular culture, religion and the things they symbolize in various phases of art. When I combine them into some sort of creature with a female body, that sort of becomes a specific quality-for example, there's a sprawled out woman that's multi-breasted with a hog head. The multi-breasted figure in a lot of religious or older prints tended to be the mother figure. Now we associate the swine image as a slovenly character. It's sort of combining something that should be seen as admirable but has been twisted into some sort of horrifying image.

Like a rural Arkansas shanty that's overrun with human piglets. Is Cookie Monster going to figure into this show at any point? Elmo?

No, but I love cookies. Maybe I should work that in somewhere.

You tend to focus exclusively on female subjects:

Hey, I took an art history class in college.

And that's how you learned to identify the penis from the vagina? 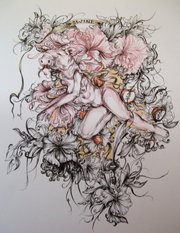 Well, as I'm sure even you have figured out by now, it's more complicated than that. I don't think the short skirt/sweater image really gets everything across. Yeah, I tend to show women in some sort of stage of distress, whether it's pre-distress or post-distress. I used to paint a lot more about violence, now I'm more interested in viewpoints of women. More portrayals as opposed to things you go through in a lifetime as a woman. That tends to be a game that's more attractive for younger artists, to paint something wildly violent-something overt and spread eagle. At a certain point you grow out of that and want to take a closer look at the issues. Sorry to disappoint people who are looking for spread eagle.

Hey, there's still plenty of nipples in the show. Speaking of which, how does one paint the perfect nipple?

You look at them a lot.

To a deeper, more bullshit question-do you paint women as you view them, or as you'd like to see them? Are they portraits or narratives?

More and more I end up painting people that I know, so it does take on more of a recognition factor. Not necessarily within their lives, but I think I make a narrative that's culled from people I know. I tend to use more and more of my friends in my painting now, so inevitably I'll pull out more of their qualities and make the perfect painting for them to be in. 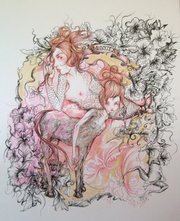 Any of your friends pose for the hog headed woman?

Oddly enough, I don't have any friends with physical animal amalgamations.

You've been hanging out at the wrong bars. Although, admit it-you just paint your friends' faces over your own body over and over again, don't you?

Okay, you got me. Actually, I tend to paint my own face into them because I'm the cheapest and easiest model.

Did having a nun for a mother f*ck you up enough as a child to turn you into an artist?

Oh, absolutely not. I think one of my largest fan bases is the Sisters of Charity of Leavenworth. They come to all of my shows regardless of content, collect all of my postcards and prints. You have to understand, those women are not the Bishops. They're the ones who actually talk to the people and do humanitarian work. They're a whole lot wilder than people tend to give them credit for-or want to give them credit for, maybe. My mom, a nun, was an art teacher and protester. I grew up boycotting everything, never quite sure why.

It's a First Fridays show-you going to have booze?

Is exhibiting in Kansas City, much like child labor laws and condoms, a necessary evil?

I love showing in KC. I lived there for couple of years, so I have a lot of people I know in the art scene up there. More and more, I think the Lawrence and KC scenes are growing together anyhow.

Dropping all humor and irony and bullshittery, 50% of all profits from this show will be donated to GaDuGi Safe Center in the name of Jana Mackey. Why did you feel compelled to do this?

I thought it would be an appropriate way to remember her in a positive way, considering the brutality of her death. Her step-father made a really amazing comment at her funeral-that there were 1,100 people in the room, and if you wanted to give any reason as to why she was killed, it could be that she was one activist and now there are 1,100. It's true that if everybody did just one something, one good thing, you have a whole lot more activity going on than just sitting around being depressed and mourning.

Wow! Its "like" the interviewer is insanely immature and incapable of taking the artist and her message seriously.

I prefer "insanely callow," thank you very much. Also, I take Molly and her message very seriously...at least I would if I had any idea what her message was. Her name WAS "Molly," right? I really have no idea since I wasn't even listening to what she was saying.

obviously...No, I have a valid point here and am not just bitching. You take a relatively serious topic about an artist, her work and how half of her show's profits are to benefit her deceased friend's work and memory and you manage to sound glib and yes, callow (which is also defined as immature). Its great when you're satirizing the news, not so great when you are interviewing someone who obviously doesn't appreciate your offhandedness. It really comes across that way. Not meaning to sound like such a troll...I was just put off.

You know, I thought the same but thought I was just being a grouch. I wondered why the interviewer was trying to steal the show--the story was about Molly Murphy and her work.I love Molly's work, but this interviewer dude thinks he's funny when really he seems to be insulting her....Elmo? What?

I see what ya'lls are saying about the interviewer getting in the way, but in between the wise cracks is some insight into Molly and her work. Irreverent doesn't necessarily = disrespectful, and just because it's about Art doesn't mean it has to be so damn Serious.

You may well have a point. Would be curious to hear what Molly thinks.

Thank you to everyone who read and took to heart this interview. Lawrence.com has always shown great support for my work around Lawrence as well as an interest in the local arts scene in general. I appreciate that they felt this show worthy of coverage, and feel Gavon, though highly incorrigible, is a smart and talented writer. That said, Gavon, you owe me a beer for Elmo.

No, Molly...I owe you a case of Cristal for Elmo.

Okay, I'm gonna flog this dead horse just one more time. No one is saying that art needs to be talked about in some intellectually stuffy, overly serious way. More than one reader feels that the interviewer's flippant tone detracts from the interview. I read it more than once to make sure I wasn't overreacting. I wasn't.I also don't see any real insights being made by Gavon. Its like he was interviewing Molly to hear himself talk.I love irreverent humor. I am a foul-mouthed, shit-talkin' sailor of a woman but I know when to keep my snarkiness to a minimum. There really is a time and a place for everything.

And also, I would like to add that this show kicks ass and I love that its being held in a tattoo parlour! Molly is an amazing woman and artist. Her contribution to the GaDuGi Safe Center demonstrates the love she has for her community and the people dear to her heart. Thanks...

I am happy to see the promotion and learn more about Molly's workSometimes it's hard to tell in transcribed interviews how much fun the two people are having. Podcasts can sometimes bridge that gap, but they also tend to be much longer.Gavon does evoke in us the seriousness of the subject matter by making light. That is an art itself, no?If you don't agree, then Gavon is perhaps (like condoms) a necessary evil, disseminating such important events going on in our community.