"Buying food at the grocery store and not spending all of my money on food at the concert. Lots of ramen and soup. I also roll my own cigarettes-it's super cheap. It's saved me a few thousand dollars, already. When I'm at a festival like Wakarusa, I try to cut deals with other vendors. If there's another vendor out there, and they're cool people, they can come to our tent and do some trades. If you're a festival-goer, look for the best deals, because deals are out there. You've got to shop around, that's what it's all about. I spent $1 on this hat and these sunglasses. USA! Let your freak flag fly!" 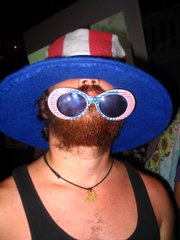 What do you splurge on?

"We'll get a lot of booze after the festival and party. We'll probably hit up some bars in Lawrence. Sometimes we'll splurge on ribs or something nice and tasty and delectable-although most of the money is going to gas."