The four-day Wakarusa Music and Camping Festival wrapped up on Sunday, ending on a sour note when thunderstorms shut down most of the evening's performances and illness forced headliner Emmylou Harris to cancel. Despite inclement weather throughout the weekend, the Lawrence festival still drew an international crowd of thousands. *:FEMA arrived following reports of disease-ridden tent cities sprouting up in the wake of the storm, with nude survivors wandering aimlessly in their own filth, but then left when they realized it was just the touring entourage for The Flaming Lips. 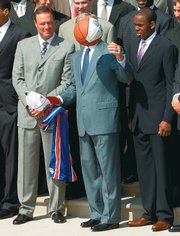 KU basketball coach Bill Self, left, and guard Russell Robinson, right, watch as President Bush (center) bounces the basketball given to him as he honored the 2008 NCAA men's national champion Kansas Jayhawks.

HAIL FROM THE CHIEF

President Bush welcomed the national champion KU men's basketball team to Washington, D.C., last week for a ceremony in the White House Rose Garden. Bush applauded the team for their victory and chanted "rock chalk Jayhawk." *:Bush went on to compliment the Jayhawks for their Final Four performance, then sighed and confessed, "Thank God this is my final four-I freakin' hate this job."

Severe weather pounded the Midwest last week, with thunderstorms and tornados triggering floods, property damage and at least eight deaths. Storms in central Kansas led to the escape of two elephants from a traveling circus that then traipsed through residential neighborhoods in WaKeeney, Kan. *:Said one WaKeeney resident, "Holy f*cking shit, there's a f*cking elephant in my f*cking backyard." Adding, "F*cking f*ck."

Fredric J. Baur, inventor of the Pringles can, died last week at the age of 89. At his request, part of Baur's cremated remains were placed in a Pringles container and buried in his grave. *:Baur was inspired by Wendy's founder Dave Thomas, whose last wish was to be ground into chili and served atop a baked potato. 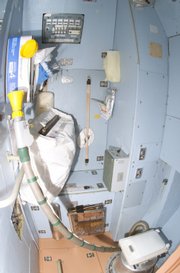 Toilet compartment in the Zvezda Service module of the International Space Station.

BEAM ME UP, POTTY

The only toilet on the International Space Station was finally repaired last week when the space shuttle Discovery dropped off a new pump, offering relief to the three-man crew that had been forced to manually empty the broken toilet and visit the lavatory in pairs for two weeks. *:Forcing the men to visit the bathroom in pairs looks likely to have been an act of sabotage, with most evidence pointing to junior astronaut Larry Craig.

Barack Obama became the Democratic nominee for president last week, the first African American to lead a major political party to the White House in U.S. history. Hillary Clinton initially refused to concede on Tuesday when Obama secured enough delegates to clinch the nomination, but eventually suspended her campaign and threw her support behind him on Saturday. *:John McCain, in an attempt to remain relevant in this historic election, reminded everyone that Barack Obama wouldn't even be running for president if McCain hadn't personally supported the 15th Amendment in 1865.