Bad: It's the end of MGS

I'm currently asking myself a question that I'm sure dozens of game reviewers around the country have had to ask themselves recently: How do I write about Metal Gear Solid 4 without coming off as hyperbolic? The game is so epic, so magnificent, and so polished that it makes other blockbuster titles (GTA IV, Halo 3, virtually anything else you can name) look downright silly by comparison. It's complex, hilarious, and brilliant all while remaining a fantastic gameplay experience. Hardcore MGS fans will be amazed by the fact that it ties up virtually every single loose end and unanswered question raised in the entire history of the franchise. There hasn't been a single "final chapter" in any mainstream film, television series, or videogame in history that so effectively satisfies its fans in every conceivable way.

As we've known for a couple of years now, Solid Snake has aged rapidly thanks to the cloning process, giving him the appearance of a man decades older than he actually is. He knows that he doesn't have long to live thanks to the FoxDie virus injected into him back on Shadow Moses Island in MGS1, and has come to terms with this being his final mission. The mission is to stop Liquid Snake (in Revolver Ocelot's body) from mounting an insurrection using his five mercenary groups as well as turning The Patriot's own technology against them.

If you haven't followed the series, the previous paragraph probably made little to no sense to you. This isn't an issue when playing through the game, because it does a great job of going over previous events. This doesn't mean you can pick up MGS4 and understand everything even if you haven't played any of the others, it just means that it gives you some sort of idea of what's going on. To fully appreciate the narrative, however, a thorough knowledge of the events of MGS 1-3 is recommended. 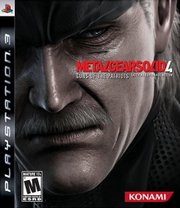 For the serious fans of the series, you couldn't ask for more out of MGS4's story. Virtually every single character that has had an impact on the franchise is here in full force - Hal Emmerich, Raiden, Meryl Silverburgh, Naomi Hunter, Mei Ling, Colonel Campbell, Vamp, Rose, Revolver Ocelot, Eva, etc. etc. They're all here and they're not just wallpaper, each and every one of them contributes to the story in some way. There are even some familiar faces that you'd never think you'd see again.

All of the previous MGS games were confined to one or two specific locations. MGS1 had Shadow Moses island, MGS2 had the tanker and the Big Shell, and MGS3 had the jungle (along with its various bases). MGS4 is an entirely different beast, however. There are five main acts, and each of them takes place in entirely different areas of the globe. If you don't want to know where they are, don't read the rest of this paragraph. Guns of the Patriots will take you to the Middle East, South America, an unspecified European city, Shadow Moses island (!!!), and a massive floating fortress called Outer Haven. Act 4 is literally the entire Shadow Moses area from the first game, which was an absolutely incredible experience to relive if you're a fan of the series. It brings back so many memories as you travel through familiar territory. You'll hear flashbacks of Grey Fox's voice when you're in Otacon's office, experience another sniper battle in the snowfield where you fought Sniper Wolf, and fight Gekkos (essentially smaller Metal Gears) in the area where you fought Vulcan Raven in his tank. There's even an excellent boss fight that takes place in the main Metal Gear Rex hangar.

The action itself is head-and-shoulders above the other titles in the MGS series. We finally have a fully-controllable camera (first introduced in the fantastic MGS3: Subsistence), and your battlefield options have never been so varied. I'm absolutely terrible at being stealthy, so I found myself blasting through the PMC forces with the M4 Custom more often then not. If you're a little more skilled when it comes to sneaking, however, you have far more options. The new OctoCamo system is far more intuitive than MGS3's constant use of menus, and allows Snake to instantly cloak himself in whatever pattern he's pressed up against. You can also utilize Otacon's newest invention, the Mk. II robot. You can send this small machine wherever you'd like in the battlefield (provided you don't go too far), and it can scout your path or even knock enemies out with a shock attack.

Early in the game, you'll meet a weapons launderer named Drebin who is always accompanied by his odd, hairless, soda-sipping monkey companion. Unlike other games in the series that forced you to accumulate weapons at specified moments, you can pick up any weapon at any time in MGS4. The only catch is, you'll occasionally have to pay to "unlock" these specific ID-tagged guns. You pay via "Drebin points" which you earn by selling him various guns you've found across the battlefield. It's not a complicated system by any means, you'll automatically earn these points as you pick up the weapons, as well as when you satisfy certain criteria (killing unmanned machines, activating special flashback sequences during cutscenes, etc). These points can unlock weapons, buy new ones, and even purchase ammo at any point in the game. It's incredibly useful, and greatly improves upon the combat experience in MGS4.

There will be moments that test your patience. The first half of Act 3 caused me to yell more four-letter words at my television than any other game in recent years. Granted, this wasn't because it was poorly designed, it was just because it required a level of patience that I'm not used to. A section of the game that should have taken me 20 minutes ended up taking me damn near two hours because of the level of stealth it requires. There will also be cutscenes that you're not particularly interested in, regardless of your level of MGS fandom. It's my favorite game series of all time, but even I'm not enthralled by ten minute cutscenes featuring two women talking about making eggs.

Metal Gear Solid 4: Guns of the Patriots is the most "complete" game I've ever had the pleasure of playing. It's one of the only times I've finished a game and was able to sit back and honestly think "there's not a single thing I would have changed about that." Perfection is not a word I throw around lightly, but I'll apply it to MGS4. Every single aspect of the game shines, and it's clear the development team truly cared about giving their fans a final chapter this legendary series deserves. There are moments (especially in the final few hours) in which you'll become completely lost in the game, almost forgetting you've got a controller in your hand. It's the absolute pinnacle of gaming as a form of entertainment, and raises the entire medium to a level of art never seen before.

I agree 110% with your review! This is truly the most engrossing game of all time and a fitting end to what has been my favorite series of games for the last 20 years. It is so sweepingly dramatic and beautiful that it should almost win an Oscar! I'll admit, I got a little teary-eyed at the end of the game.Thanks for the great review, you really nailed it. 10/10 for sure. If anyone has been waiting to buy a PS3, now's the time, this is the best game ever made!

great review! this is the best game i've ever played and even though i just finished it, im going back again!