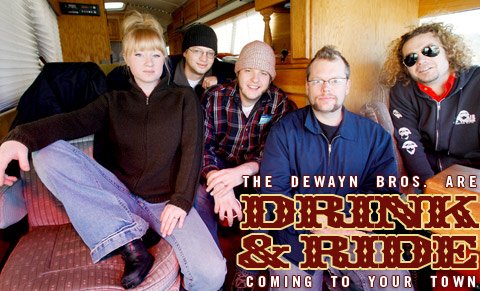 Like most bands that you might stumble upon at the Walnut Valley Festival in Winfield, Kansas, The DeWayn Brothers pen twangy tunes about hearty country livin' (the non-Cracker Barrel variety). They embrace the culture of whiskey, prison, bacon, and more whiskey while avoiding said sins jes' enuff to stay out on the road 200-plus dates a year. The stringy quintet recently ditched its alter-ego rock band Loco Macheen to put 110% effort into the Bros-an evolution that's well documented on the group's third LP "Farmer." Lead singer Jamie Briggeman hogties listeners with her pin-up caterwaul while Garrett Briggeman and Eric Nelson go all Flatt & Scruggs with banjer and geetar. The latter two drove up from their home base in Emporia to shoot the poop and give their latest compact disc a whirliwoo.

Drink & Ride: The DeWayn Brothers are coming to your town

Like most bands that you might stumble upon at the Walnut Valley Festival in Winfield, Kansas, The DeWayn Brothers pen twangy tunes about hearty country livin' (the non-Cracker Barrel variety). They embrace the culture of whiskey, prison, bacon, and more whiskey while avoiding said sins jes' enuff to stay out ...

lawrence.com: Are any of you actually related?

Garrett: Nope. Just me and Jamie by law, I guess.

Any chance you'll work in the other guys contractually?

The band's been up here in Lawrence quite a bit. It almost feels as though you're as much a part of the scene as any other local band.

Eric: Yeah, usually once every six weeks we play up here.

This is what you guys do full time? How difficult is it?

Eric: It's an uphill battle. We basically own a small business, so we're dealing with all the money stuff and then trying to create as artists : But it beats a day job, that's for sure.

Is bluegrass music a tough sell these days?

Eric: We rarely try to play a bluegrass show. We like to play with rock bands or something different than traditional bluegrass-because we're obviously not, and most of our influences have nothing to do with bluegrass. Sometimes we scare the traditional bluegrass people, and the rock people are like, 'Wow, this is interesting and different.'

Is there a percussion element onstage?

Eric: When we play live it's a standard bluegrass lineup: banjo, guitar, mandolin, upright bass. But in the studio we try to bring more to it, and Mike West (of Truckstop Honeymoon)-who produced this album-is a big proponent of that: making it more than just recording what you do live. We had Colin Mahoney come in and play drums.

What was it like working with Mike? I assume you're Truckstop Honeymoon fans?

Garrett: Yeah. This is the second album that Mike has done with us. We were the last band to record at the original Ninth Ward Pickin' Parlor in New Orleans, a month before Katrina.

What were your goals with the new record?

Garrett: We had a bigger pool of songs to choose from and a whole year of touring under our belt, so we were a much tighter band and the songs were more rehearsed.

All originals? Or do you throw in some covers?

Eric: For live shows, we'll do quite a few covers. But the album is all original except for the hidden track, which is a Kirk Rundstrom tune-"Abilene."

What are your ultimate goals for the DeWayn Brothers?

Eric: :You know, just being able to make a living and tour comfortably. There are bands out there-like Old Crow Medicine Show and Yonder Mountain String Band-that are doing really well with this kind of music. Look at what Nickel Creek did. They were probably the biggest group to come out and do the Nashville thing with bluegrass. That's the thing with a lot of the music that's coming out now-it's not really bluegrass. Nickel Creek plays a lot of jazz and they're smart pickers. We fake it as much as we can.

Garrett: I catch myself saying it both ways.

It depends on your North or South persuasion.

Eric: Yeah. How drunk are you when you're saying it? A lot of fans will yell Dee-Wayn.

Is that followed by "yee-haw"?

You play down at Winfield just about every year?

Eric: Every year for the last five years. It's always a good time : We got lucky the first year we played at Winfield-we got to play a really good slot on Stage Five. Now, when we play on Stage Five, it's a huge crowd. It's nice to see it out to the road and jam-packed with people who want to hear our stuff.

What kind of libations do you partake of?

Eric: We prefer Lost Lake or Drummond Brothers if you're gonna go cheap. You can probably get twice as much beer into Winfield if you buy Lost Lake as opposed to Budweiser or even fancy PBR.

Garrett: We wrote in our bus on Highway 50 going through CaÃ±on City to Salina.

Eric: They have a lot of penitentiaries there, and I think we were halfway through a bottle of Evan Williams at that point.

Hopefully the driver wasn't halfway through a bottle:

Eric: No, he was sober. We don't drink and drive. But we do drink and ride.

Good GAWD, I love these guys!!! Not only a friggin' awesome band - but good people, too. I'm sooooo there!