The Kansas Legislature approved a bill that would overturn a decision of the Kansas Department of Health and Environment and allow for the construction of two coal-fired power plants outside of Holcomb, Kansas. Governor Kathleen Sebelius' administration had rejected the plants because of environmental concerns and has threatened to veto the bill when it arrives at her desk. *...On top of the veto, a clearly frustrated Sebelius promised legislators she will "come down there and plant my carbon footprint up your ass!"

Hillary Clinton broke Barack Obama's Democratic primary winning streak last Tuesday, defeating him in Ohio, Texas and Rhode Island. Despite only winning Vermont, Obama retained his delegate lead. Exit polling in Ohio indicated that Clinton was able to raise doubts about Obama's ability to lead the country, doubts sewn at least partially by a Clinton campaign commercial that asked who you want answering the White House phone during an emergency at 3 a.m. while your children sleep. On the Republican side, John McCain clinched the GOP nomination, thus persuading Mike Huckabee to drop out of the race. *...The "3 a.m." ad proved to voters that Clinton would be up at all hours of the day, helping her secure Ohio's crucial meth-binge vote. Mike Huckabee, now that he's ended his campaign, will return to his day job of playing bass in Jesus' End Times Jug Band.

RUSKIE OF THE YEAR

Dmitry Medvedev is the new president-elect of Russia, winning in a landslide election last week as outgoing president Vladimir Putin's hand-picked successor. Western observers criticized the election as being heavily skewed toward Putin's party, with some opposition candidates being barred from running or imprisoned. *...In an effort to prove that he's not merely a puppet of Putin, Medvedev has announced a bold new platform of brutally torturing and strangling his political opponents rather than simply poisoning them.

The city of Lawrence is awaiting results from a survey before proceeding with discussions about instituting a curbside recycling program. The curbside pickup service would be paid for by an increase in municipal utility charges and has long been advocated by Lawrence's Sustainability Advisory Board. The citywide survey will gauge interest in and how much to charge for such a service. *...Environmentalists, already skeptical of the city's commitment to sustainability, were dismayed to find that the survey was printed on paper made from Baker Wetlands tree pulp and shredded polar bears.

A Venezuelan soldier stands guard at a checkpoint in Paraguaipoa, on the Venezuelan border with Colombia.

GUN FOR THE BORDER

Venezuelan president Hugo Chavez ordered military forces deployed along the Venezuelan/Colombian border last week, raising tensions in an already precarious situation between Colombia and Ecuador. Colombia had launched a military strike into Ecuador against leftist rebels the week before, a move that both Ecuador and its ally, Venezuela, denounced and threatened retaliation against. *...Matters weren't helped during the border standoff when CIA chief Michael Hayden, in a fake beard and sunglasses, kept popping up in the bushes and screaming, "Tu mama es una puta!"

IN THE MAHMOUD FOR LOVE

Iranian president Mahmoud Ahmadinejad made a historic visit to Iraq last week, being welcomed with red carpet treatment in Baghdad. Iran and Iraq had been bitter enemies since Saddam Hussein's invasion of Iran in 1980, but are now close allies in the wake of the United States' occupation of Iraq. *...Other guests visiting Iraq who are more popular than George W. Bush include Kim Jong-il, Charles Manson, and whooping cough. 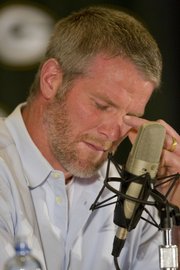 Green Bay Packers quarterback Brett Favre gets choked up as he talks about his retirement during a news conference.

A FAREWELL TO ARM

Green Bay Packers quarterback Brett Favre announced his retirement from football last week, ending a Hall of Fame-worthy career that spanned 17 years and one Super Bowl championship. The 38-year-old bade a tearful farewell during a press conference in which he said he wanted to retire at his peak and "on my terms." *...Shortly after the press conference, Packers management stuffed Favre in a crate and shipped him to China, where he will be processed as dog food and glue.

IT SHOULD'VE BEEN C. THOMAS HOWELL!

It was revealed last week that actor Patrick Swayze has been diagnosed with pancreatic cancer, with some reports indicating the disease was terminal and that Swayze only had weeks to live. Swayze's doctor has denied the cancer was that advanced and said the 55-year-old star of "Dirty Dancing" and "Roadhouse" was responding well to treatment. *...Swayze remained defiant in the face of such grim news, shouting to reporters outside of his hospital, "Nobody puts Swayze in the coroner!"

A northern river otter was recently captured on film at the Baker Wetlands, the first time the species has been seen in Lawrence in over 100 years. Otters were nearly hunted to extinction in Kansas in the 1800s. *...The Kansas Department of Transportation, eager to pave over the wetlands to make way for the South Lawrence Trafficway, strenuously denied the photograph was of an endangered otter. "Simply a weather balloon," said a KDOT spokesperson. "The large, cougar-like entity later photographed eating said weather balloon? Swamp gas." 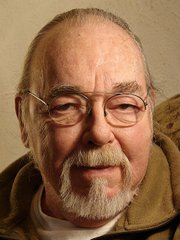 Dungeons & Dragons creator Gary Gygax died last week at the age of 69 following a long bout with heart disease. Dungeons & Dragons was the seminal role-playing adventure Gygax crafted in 1979 that spawned the genre of fantasy and strategy games. *...Gygax died as he lived-in his mother's basement.