Good: Recreates the feel of the show fairly well

Bad: Nothing really interesting or new for fans of the show, gameplay is definitely lacking, the fuse puzzles

Lost: Via Domus marks the second game in the last few years that has been based on one of my favorite shows. I approached this with the same skepticism as I did the last one, 24: The Game. Jack Bauer's trek to the PS2 could have been a great experience, as the show's format seemed tailor-made for a great action game. Unfortunately, it was an absolute mess in every way. Lost, on the other hand, does not exactly seem like a show that would translate well to a videogame. Its focus is far more on narrative and characters than it is about action, and the complexities of the show would be hard to represent on an game console.

I learned fairly quickly that Lost: Via Domus is about as much of a "game" as the show is. The show is famous for playing with its audience, causing devoted fans to go through episodes frame-by-frame looking for clues to the islands secrets. There are countless message boards and blogs that feature an absurd amount of posts made by viewers trying to figure out just what the hell is going on. The game, on the other hand, is like a watered-down episode of the show featuring a character that proves to be far less interesting than the series regulars.

I say Via Domus doesn't feel much like a "game" because there isn't much to do outside of walking around, talking to the survivors, and taking pictures (both on the island and in your character's flashback sequences). You'll get the occasional smoke monster attack or "run through the cave before your torch goes out" segment, but none of this is particularly engrossing. I understand they wanted to recreate the feel of the show, and they've done that fairly successfully - but the nature of the show doesn't make for a good videogame experience. 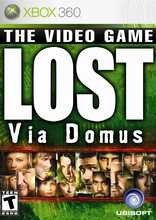 One of the decent ideas in the game is the inclusion of the flashbacks from the show. Going with the "everything ties together" feel of the show, you'll run into survivors from the island during these scenes. These aren't action-based, rather, you'll be taking photographs in an effort to repair the memory of your protagonist. Gameplay-wise they're not anything special, but it makes it feel much more like a real episode of the show. You'll even get the "previously on Lost" recaps at the beginning of each new stage.

There are some nice aspects of the title if you're a devoted Lost fan. Walking around the wreckage of Oceanic Flight 815 is a nice experience, although I don't remember the part about Locke feverishly trying to redirect a fuel leak before an explosion. Most of the setpieces from the show are present, from the infamous "hatch" to the Pearl and the Swan. It's definitely cool to experience these familiar locations in an interactive environment, but it's unfortunately not up-to-date. You're pretty much playing through the first two seasons of the show, so don't expect to run into Otherville or try to activate the underwater radio signal from the season 3 finale. Rather, expect to hear old references to Drive Shaft and "You All Everybody".

The actual representation of the characters are a bit spotty as well. Only a few of the actual actors voice their characters, and thankfully one of them is Michael Emerson as Ben Linus. Most of the sound-alikes do a fairly decent job of mimicking the actual actors, but others are way off (I'm not entirely sure why John Locke sounds like Walter Matthau). Likewise, the actual 3D renders of the actor's faces are hit-and-miss. Jack, Locke, and Hurley are pretty accurate, but Michael looks nothing like Harold Perrineau.

It's cool to see all the familiar show locales, but the actions of the survivors are terribly awkward. In the show, the post-crash carnage was perfectly executed. The sense of urgency, danger, and confusion was palpable, and it was a great jump-off point for a classic series. In Via Domus, however, you simply run around while all of the survivors either lay on the ground or just stand in place awkwardly. In fact, the very first character you encounter is Kate just standing in the middle of the jungle staring off into the distance. Granted, the crash scene is a tough moment in the show's history to capture, but considering how crucial it is to the narrative you'd think the developers would spend a little more time making it feel authentic.

Other gameplay aspects are a pain in the ass, such as the cave segments in which you constantly have to extinguish and re-light your torch whenever you encounter a waterfall or some bats. Your character also has an annoying habit of getting awkwardly caught on rocks and other environmental objects. The worst offender by far is the variety of electric panel puzzles you'll encounter. Remember how annoying the Bioshock hacking puzzles were? This is easily ten times more frustrating. You'll be faced with a panel of electronics with holes for fuses, and you have to place different fuses into the holes in an effort to re-direct electricity at just the right amount. It's hard to explain, but rest assured you'll immediately hate it.

I didn't expect any gripping gameplay from Lost: Via Domus, and I didn't get any. No surprises there. However, I did hope for a little more in the way of narrative. There's no real secrets to be found here, nor is there anything particularly interesting. If you're a Lost fan to the point of obsessing over minor references to the first two seasons, then maybe you'll enjoy this. I absolutely love Lost, but getting to take a picture of the hatch, seeing a polar bear corpse, or trading a bunch of papayas for a lantern isn't enough to recommend this title even to other fans.