Grammy-winning band Wilco, if all goes according to plan, will be performing an outdoor concert in downtown Lawrence on May 14. The City Commission still has to rule on whether promoters can block off much of the 900 block of New Hampshire Street and serve alcohol. Ticket prices and availability have not been set. Other marquee shows announced for that same day: M.I.A. at Liberty Hall and Radiohead in St. Louis. *:To keep things fair, anyone who is downtown during the concert that didn't buy a ticket will be forced to cover their ears and go "La, la, la, I can't hear Wilco, la, la, la" really loudly.

House Speaker Melvin Neufeld and state Rep. Tom Sloan of Lawrence last week blamed the rejection of two coal-fired power plants by Gov. Kathleen Sebelius for the loss of a proposed oil refinery project in northeast Kansas. The Sebelius administration denies the claim since the decision by the refinery not to build in Kansas came months before the power plants ruling. *:Neufeld and Sloan, in a last-ditch effort to get any sort of polluting industry into the state, rammed through legislation that would mandate every Kansas community build a soiled diaper and dead musk ox incinerator. 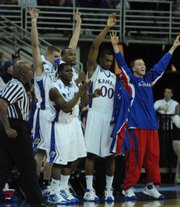 The Kansas bench rises to their feet signaling victory over Portland State in the final minutes of play Thursday, March 20 at the Qwest Center in Omaha, Neb.

KU easily advanced to the Sweet 16 of the NCAA Tournament, defeating both Portland State and UNLV by wide margins last week. The top-seeded Jayhawks face 12-seed Villanova at 8:40 p.m. Friday. No. 2-seed Texas also advanced to next weekend by beating Miami 75-72, but all other Big XII teams lost (Baylor in the first round, and Texas A&M, K-State, and Oklahoma all lost in the second round). In other March Madness news, 10-seed Davidson upset 2-seed Georgetown, and 7-seed West Virgina beat 2-seed Duke. *:College basketball fans around the country came together on Easter to celebrate the resurrection of Jesus Christ. Many then repeatedly took his name in vain for ruining their brackets.

Kory McFarren, the boyfriend Pam Babcock-who spent nearly two years in McFarren's bathroom and sat on the toilet so long that the seat adhered to her body-was charged with mistreatment of a dependent adult in Ness City, Kan., last week. *:When asked why he wasn't concerned that his girlfriend never came out of the bathroom over the course of two years, McFarren responded, "Hey, what woman doesn't take forever in the bathroom? Am I right, guys, or am I right? Gimme a high five, breauxheims! Wait:what are the handcuffs for?"

Barack Obama responded to the growing furor over controversial comments made by his pastor, the Rev. Jeremiah Wright, with a major speech last week on race in America. Obama detailed America's complicated history of racial division and called for unity in the speech, which he wrote himself and the New York Times called "powerful and frank." On the Republican side, John McCain was caught repeatedly saying that Iran was assisting Al Qaeda in Iraq, which he later had to correct himself on since Iran is a Shia Muslim nation and Al Qaeda in Iraq is a Sunni Muslim organization. The Shia and the Sunni are currently warring with one another in Iraq. *:Analysts say Obama's speech was so effective in neutralizing the inflammatory sermons made in his church that everyone thinks he's a Muslim again. In other religious news, John McCain thinks "Islam is the one with the dradles and matzo balls, right?"

A still from the film "Dr. Seuss' Horton Hears a Who"

At the recent Hollywood premiere of "Horton Hears a Who," the big-budget film adaptation of the Dr. Seuss children's book, anti-abortion protesters infiltrated the screening and began shouting slogans during the movie. Pro-life groups view "Horton" as endorsing their agenda because of a line in the book that says, "A person's a person, no matter how small." *:This misinterpretation of an innocuous children's tale has inspired an entire line of pro-life adaptations of Dr. Seuss books, including "The Vacuumed Belly Sneetches," "Uterus the Tooterus," and "One Fish, Two Fish, Red Fish, Late Term Abortion Is Murder On Scale With The Holocaust."

Gov. Kathleen Sebelius last week approved a 60-day extension on the deadline for the state to negotiate contracts with prospective casino developers. The Kansas Expanded Lottery Act, passed in spring 2007, allows for four destination casinos in the state, including one in Wyandotte County. *:The extension was approved so the contractors can get their finances in order. Specifically, they need to wait until they hear back from their bookies to see if they beat the spread on the KU game. 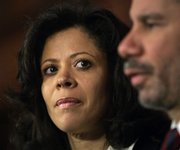 David Paterson, New York's first blind and African American governor, who assumed power in the wake of the Eliot Spitzer prostitution scandal, admitted in a press conference the day after he was sworn in that he had engaged in numerous extramarital affairs in years past. *:Paterson blamed the affairs on his blindness, saying that along with heightened senses of smell and hearing, it had left him with a heightened sense of douchery.

Apple is reportedly considering giving users free access to its complete iTunes music library in exchange for a premium fee for the iPhone or iPod. Analysts predict Apple will have a difficult time convincing record labels to let them give away music. *:As the next stage of their newly unveiled "We Can Do Whatever The Hell We Want To-We're Apple" business strategy, CEO Steve Jobs will soon announce plans to force Metallica and Alicia Keys to come to your house and play anything you want.

"30 Rock" star Tina Fey took a swipe at "The Daily Show with Jon Stewart" in the latest issue of "Reader's Digest," saying of the Comedy Central show that it often receives "'clapter,' which is when you do a political joke and people go, 'Woo-hoo.' It means they sort of approve but didn't really like it that much." The comment generated a stir online, as did Fey's recent monologue endorsing Hillary Clinton on "Saturday Night Live." *:Along with "clapter," Fey has helped popularize another clever term-meaning both "self-important condescension" and "alienating your fan base with strident political views"-known as "Dennis Miller-itis."