Actor Blake Robbins engages in a gun battle during a scene shot in Nortonville for the film "Bunker Hill."

In "Ninth Street," it was the story of the small black section of Junction City, Willmott's hometown, seen through the eyes of a pair of winos. In the Ken Burns-style mockumentary "CSA: The Confederate States of America," race was given biting satirical treatment in an alternate U.S. history supposing the South had won the Civil War.

In Willmott's third film, premiering Saturday at Liberty Hall, he changes his focus a bit but confronts a subject that's no less fundamental to the makeup of the country: the dark side of the post-9/11 reaction.

The film is a modern-day western set in the town of Bunker Hill, Kan., in which a man named Salem (the "mysterious stranger," in the western tradition) comes to town after being released from prison to reconnect with his ex-wife and children, who have moved to her small hometown. When the town is struck by a terrorist attack, societal mores dissolve and fear, distrust, and unmasked bigotry usher in a new era of militancy.

In Lawrence filmmaker Kevin Willmott's latest drama, James McDaniel portrays a former Wall Street executive who heads to a small Kansas town to reconnect with his estranged family. But when an unaccountable event knocks out all electricity and communication, the town is thrown into chaos.

This is not just the stuff of fiction, Willmott says, but a component of the new, post-9/11 reality in the United States.

"During a time when security, the mantle of a nation, is tested-like in the situation we deal with in 'Bunker,' where you've got this fear going on that is unanswered-what will you turn to?" Willmott asks. "Will you turn to democracy, or will you turn to fascism? That's really the question that the film tries to raise. Some people would say that we've turned to fascism."

As the town of Bunker Hill struggles to figure out who's behind the attack, their dangerous hidden fears are unleashed against all types of people that Willmott describes as "the other." Non-white, non-Christian, non-English-speaking people are viewed with distrust. Particularly Farook, a Muslim man who runs a convenience store in town.

And through the mysterious stranger, Salem, Willmott brings in an African-American viewpoint of the 9/11 attacks. Throughout history, he points out, African Americans have been terrorized by groups like the Ku Klux Klan. So to some blacks-or anyone else who has experienced domestic terrorism, such as victims of the Oklahoma City bombing-the 9/11 attacks may not have been greeted with as high a level of shock, he says.

This viewpoint has been echoed in the sermons of the Rev. Jeremiah Wright (now famous for the words "God damn America") that created a firestorm in the Barack Obama presidential campaign in the last couple of weeks. "I think that one of the things that Wright was trying to get at-you've certainly heard that conversation among black people-was that reality," Willmott says.

Greg Hurd, who co-wrote the film with Willmott, says most of the terrorism-themed movies made since 9/11 have been set outside the United States-all-American hero chases down evil bad guys on foreign soil-and ignored the domestic issues of security and stripped civil liberties.

Director Kevin Willmott, center, works through a scene with actor Kevin Geer playing the part of Haskell Superintendent Peairs during filming for "The Only Good Indian" on Monday at the Watkins Community Museum of History, 1047 Mass.

As in Willmott's first two films, the cast and crew is largely composed of locals, with an out-of-town star or two mixed in (Salem is played by James McDaniel, best known as Lt. Arthur Fancy on "NYPD Blue").

Willmott's films seem to have infinite room for KU students and other local amateurs. He and Matt Jacobson, the director of photography, are both associate film professors at KU, and they do a fair amount of teaching on the set.

Kevin Willmott, center, on the set of "Bunker Hill"

Muriel Green, now a KU junior in film, says the summer she moved to Lawrence she heard about the film through her roommate's friend, and, despite the fact that she had no film-related experience, she got to be a production assistant. What this meant, basically, was picking up trash around the set and fetching water, but it was something.

"Everybody knew that this movie was going on, and everybody who had anything to do with movies in Lawrence knew about it," Green says.

She got to know Willmott and Jacobson through their classes and was offered the job of assistant camera with the post-production crew, helping film shots needed to fill gaps, such as a close-up of a glass of beer or a sweeping landscape shot. 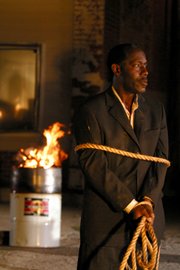 "Growing up in Kansas, I knew a lot of people who moved away to do stuff, and it's always really exciting to see people stay, or come back," she says. "All the cool stuff that you think of happening in L.A. or New York, Kevin's got this attitude of, 'Why can't we do it here? Why can't we just do it ourselves?'"

Willmott has tried working with Hollywood but says the themes he wants to focus on-like race, civil liberties, politics-aren't generally what executive producers drool over.

"I learned a long time ago that they were never going to make the films I wanted to make, and I came to reality," he says. "I just got tired of trying to talk to people about things they weren't interested in."

Instead, he's found-and, in many ways, created-a growing film scene in Lawrence.

"You have to make a decision: whether you're going to deal with Hollywood-which, there's nothing wrong with that-or you're not going to deal with them," he says. "And as an African American, it's very difficult to make movies in Hollywood that are not stupid comedies. Dramas are so rare, and political things are non-existent, so at some point you just have to decide if you're going to be Matt Dillon or Bob Dylan and go the way you're going to go. I think the sooner you figure it out, the better."