British comedian Sacha Baron Cohen, best known for his alter ego Borat, was in Kansas last week filming scenes for his next film, tentatively titled "BrÃ¼no: Delicious Journeys Through America for the Purpose of Making Heterosexual Males Visibly Uncomfortable in the Presence of a Gay Foreigner in a Mesh T-Shirt." (See YouTube clip.) Baron Cohen, in character as gay Austrian BrÃ¼no, was thrown out of the Wichita airport after stripping down to tight underwear and dancing in the lobby. He also attended a church Easter service while reportedly wearing "chains." *...In related news, Fred Phelps' head has just exploded.

One fan body surfs on Massachusetts Street as hundreds of KU fans fill the street downtown after KU's advance to the Final Four in the NCAA tournament.

Downtown Lawrence erupted into a traffic-halting street party on Sunday night as KU made it into the NCAA Final Four, but only after a nail-biting 59-57 victory over No. 10-seed Davidson College. This is the first Final Four appearance for the Jayhawks under coach Bill Self, and the first time in tournament history that the Final Four will consist of the No. 1 seeds from all four divisions. The national semifinal games go down in Austin Saturday, with UCLA against Memphis at 5 p.m. and Kansas against North Carolina at approximately 7:45 p.m., with the winners to play Monday for the championship. All games are broadcast on CBS (channels 5 and 13). The Jayhawks' matchup marks the first time KU has played UNC since coach Roy Williams left Lawrence 5 years ago. *...When KU meets North Carolina, the Jayhawks will sit down in a circle with Roy Williams and discuss lingering issues of abandonment using roleplaying and puppets. No actual basketball will be played.

The Kansas Department of Wildlife and Parks will conduct tests on the pelt of a mountain lion that was killed in Kansas recently to determine if the giant cat was native to Kansas or had migrated from a neighboring state. Mountain lions have been officially extinct in Kansas since 1904, but this is the only state west of the Mississippi with zero confirmed sightings since then. In a case of "what are the freakin' odds," this very rag published ago a story about the lack of confirmed sightings in Kansas just two weeks before. Put another way, Kansas goes some 5,400 weeks without a confirmed sighting-we hopped on the story just 2 weeks before it was old news. That's news you can count.*...Anti-migration groups are calling for any illegal cougars to be rounded up and deported, arguing that they're taking mauling jobs and using welfare chickens meant for Kansas predators.

An immigration reform bill passed through the Kansas House of Representatives last week, although the House version strips out penalties for both illegal immigrants and businesses that employ them, which backers of the original bill say makes it all but ineffectual. "They take our jobs and use our welfare dollars," said state Sen. Peggy Palmer, R-Augusta, of illegal immigrants. *...Next on the legislative agenda, instead of anything meaningful that actually help people, is an anti-gay/anti-flag burning/anti-Mexican/anti-evolution omnibus bill known as "The Keep Kansas Trailer Parks Pissed Off and Shoeless Act of 2008."

Dick Cheney in his interview with ABC News.

Amidst a sharp escalation in violence following an end to the ceasefire with Shiite cleric Muqtada al-Sadr and his militia, U.S. military deaths in Iraq climbed past 4,000 last week. When told during an interview that polls show two-thirds of Americans feel the war is not worth fighting, Vice President Dick Cheney responded, "So?" In the same interview, when asked about the 4,000 dead soldiers, Cheney pointed out that they volunteered for war and that the greatest burden of the Iraq conflict was being carried by President Bush. *...Cheney went on to say that the 4,000 dead Americans, who were killed in a war of choice that he orchestrated, were "obviously not very good soldiers if they got killed in the first place" and that their grieving mothers "should have had an abortion and saved us all the trouble."

Nicolas Sarkozy, closing a two-day state visit to Britain on Thursday, said he would consult other European leaders before deciding if he will boycott the opening ceremony of the Beijing Olympics.

French President Nicolas Sarkozy suggested he may boycott the Beijing Olympics this summer if China does not end the violent government crackdown in Tibet. Sarkozy is the first world leader to suggest he may not attend the opening ceremony in August. *...In retaliation, China is threatening to halt production of sweatshop Mickey Mouse hats sold at Euro Disney.

In the ongoing investigation into the mass firing of U.S. attorneys and millions of missing Bush administration e-mails, it was revealed last week that the White House had been destroying computers which may have contained records of the e-mails. The White House claimed in court that it was merely part of a "refresh program" to update their computer system. *...Other aspects of the White House "refresh program" include "reformatting" the Justice Department by burning it down and "updating" Karl Rove by cutting out his tongue.

In this 1996 file picture, first lady Hillary Clinton kisses Emina Bicakcic, 8, from Sarajevo, who dedicated a poem to her shortly after her arrival at the Tulza Air Base.

Hillary Clinton was forced last week to backtrack from comments she made regarding a 1996 trip to Bosnia, claiming to have been under sniper fire when her plane landed, after video of her arrival surfaced that showed no gunfire. Clinton made the sniper embellishment on at least three occasions, though she claims she "misspoke" because of to exhaustion. On the Republican side, John McCain delivered a speech on the economic crisis in which he said the government shouldn't bail out failing businesses or assist struggling homeowners. *...In other anecdotes meant to showcase her muscular foreign policy experience, Clinton also recounted surviving the Bataan Death March, leading the Charge of the Light Brigade in the Crimean War, and dodging eye lazers when she single-handedly defeated General Zod and his Kryptonian henchmen. John McCain clarified he doesn't think the government should be in the business of providing handouts, unless you're a lobbyist with great gams.

The wife of actor/comedian Robin Williams, Marsha Garces Williams, filed for divorce last week. They had been married for 19 years and had two children together. *...Garces Williams cited irreconcilable differences in the petition, saying in deposition that she "just couldn't get over 'Death to Smoochy.'" She will be asking in court for half of Williams' considerable body hair. 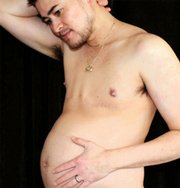 Thomas Beatie, a 34-year-old Oregon man, created a stir last week when he publicly announced he was five months pregnant. Beatie is what's known as a "trans-man"-born a woman, but having gone through legal and medical procedures to become a man. He still has female genitalia and impregnated himself with a sperm donor after his wife became infertile. *...The panic caused amongst men by news they could become pregnant resulted not only in birth control immediately being covered by every health insurance plan, but also in the new Budweiser Ortho Tri-Cyclenalada beer.