The Allen kids are a complicated set of sibs right up there with Abel and Cain or Donnie and Marie. Brett Allen makes abstract acrylic paintings. Maggie Allen made further abstractions of some of these paintings using colored pencils. They decided to conjoin these twin images into a brother and sister show called "Pareidolia." This showcase of art and ready-made "forgeries" sets up a mock family feud between the Allen brood, one which spilled over into our interview, in which Brett provided answers and Maggie supplied forgeries of those answers. The following took place over a long night of therapeutic soul-searching over the nature of family and art-and a long night of drinking. Mostly drinking.

The Allen kids are a complicated set of sibs right up there with Abel and Cain or Donnie and Marie. Brett Allen makes abstract acrylic paintings. Maggie Allen made further abstractions of some of these paintings using colored pencils. They decided to conjoin these twin images into a brother and ...

lawrence.com: What in the sam hell does "Pareidolia" mean?

Brett Allen: Pareidolia basically means when you find meaning or significance in things that are random. A good example is when people find shapes or images in clouds, or seeing Jesus in a shroud or tortilla shell. The reason I called the show "Pareidolia" is to kind of mock the idea of people not looking at the art for what it is-color and form-and trying to establish a meaning for themselves.

Maggie Allen: We knew we wanted a name that was all artsy-fartsy 'cause art people get into that, but we didn't want a name that meant anything. It's pretty much how Def Leppard chose their album titles.

Being a cretin who's threatened by intellectualism and those that can express themselves in ways that stir my repressed homosexuality, please explain to me the bullshit art school concept behind the show?

Brett: That whole standing in front of the class and going, "Well, um, this is, um, what I wanted to do" thing. The best way to break it down is that I make paintings so I have something to look at, but at the same time I do want to get a reaction from people. There's a saying that the average viewer spends three seconds looking at a piece of art when they walk through the gallery, so I want there to be an instantaneous aesthetic gratification-whether or not you "understand" it or get some sort of literal pictorial meaning out of it is irrelevant. I'm not trying to get across some deep, personal message about myself. 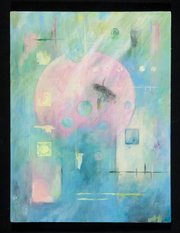 The original "There is always fear in men who bully" by Brett Allen.

Maggie: My brother is a very serious artist who makes gorgeous abstract paintings. I'm his biggest fan-not because I'm his sister, because if they were shit I'd tell you and I wouldn't have anything to do with this. I just need attention, and I'm not talented enough on my own, so I make mundane copies of his works of art. After the reception, I don't give a f*ck about this.

Is this some sort of family psychodrama being played out on the walls of The Bourgeois Pig? 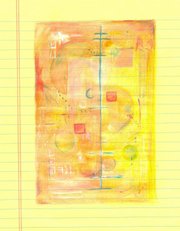 The forgery by Maggie Allen.

Brett: When Maggie was living with me a couple of years ago, one day she took out some colored pencils and sketched out a piece I had on my wall, and then taped it to the wall. To this day I don't know if that was out of sarcasm or admiration. Like, "This is such a great painting, I'm going to do it on yellow legal pad!" She liked that response, so she pushed me to do more paintings that she could follow up on. If you try to psychoanalyze it, you'll come up with a lot of pareidolia.

Maggie: I'm not a real artist, I'm a hack. I'm almost as big a hack as Gavon Laessig, but I'm cuter about it. One drunk night I convinced Molly Murphy to let us do this show, and she's a f*cking sucker, so here we are. It's a desperate, desperate act of trying to get my friends to like me and tricking them into coming down and having a drink with me. Brett's more concerned about making art, whereas I'm more concerned about drinking and talking shit. That's my art.

The Bourgeois Pig-too bourgeois for its own good?

Brett: I would like to think it's pretty approachable. The prices do keep out the riffraff, though.

Maggie: It's not bourgeois enough. The clientele of The Bourgois Pig has increasingly annoyed me over the last few years, and I wasn't sure what it was about until I was finally able to define my social and political stance, so now I'm comfortable here. I consider myself an extreme moderate, but a mild fascist.

Seriously, what's the point of art? And don't say "For art's sake"-that just makes the latent gayness in my head hurt.

Brett: One of my favorite professors gave a definition that I really liked-"Art is what anybody that has been established as an artist presents as art." Although I'm not an elitist about art-I think even bad art is art.

Maggie: The point of art is that, sometimes, "Arthur" is just too long. We don't all have that much free time and Arthur needs to get over it.

Would you ever consider working with your sibling again?

Brett: Definitely. The benefit of doing a show with her is that I am not big on the selling yourself aspect of being an artist. I just make what I make. Maggie loves what I do, and loves me, and puts me out there. In a way she's my agent for this whole thing. I wouldn't have this show if it wasn't for Maggie going, "I want to make sketches of your paintings." People think that idea is funny enough to let us have a show. Any time Maggie wants to make sketches of my paintings and that results in a show-fantastic.

Maggie: I thought you would have said, "F*ck that shit."