Early in his professional career, bassist John Stirratt opened for The Replacements in Mobile, Ala.

The headlining band had just released its 1987 masterwork, "Pleased to Meet Me," and was becoming a legendary force in alternative rock.

"They were in total rage, drinking highballs for hours until the gig," Stirratt says of The Replacements. "They were just loaded. (Singer) Paul Westerberg invited me to sit at his table, and he gave me some advice that I'll never forget. He said, 'Just get in a band with some people you can stand.'"

For Stirratt, one of the founding members of Wilco, that piece of advice has proven complicated.

Only Stirratt and singer-songwriter Jeff Tweedy have remained with Wilco since its formation in 1994. They've witnessed a total of 14 different members come and go.

Maybe "Replacements" would have been a more suitable name for Wilco.

Stirratt says the unifying factor that has kept the Grammy-winning act centered through years of experimentation, success and turbulence "would probably have to be Jeff's tunes. They're always the central feature of the band from the beginning to the end.

"Due to the lineup changes and things like that, Jeff's been mistakenly believed to have a dictatorial reputation. But there's always been a really big amount of leeway in the band. I remember any ideas I've ever had - good or bad - were always entertained."

That creative process was rather infamously captured in the 2002 documentary by Sam Jones titled "I Am Trying to Break Your Heart."

"As a document it had beauty," says Stirratt, calling from his cell phone while riding in the back of the Wilco van as it crosses Utah.

"There was some good things architecturally. The 16mm was really beautiful. The performance pieces were nice and everything. But if anyone thinks that was the process of how Wilco makes records, that is totally off-base. (Jones) was there for about eight percent of the making of that record. When the cameras were there, the people were not acting the way they normally act. You put a camera in a room, and things are going to change dramatically. Unfortunately, it couldn't have come at a worse time for certain people."

Stirratt and Wilco will be returning to Lawrence for the umpteenth time on Wednesday (this includes his and Tweedy's tenure in previous act Uncle Tupelo). They've played numerous clubs and festivals in town over the years, but this time they'll be headlining a unique concert.

Wilco and opener Retribution Gospel Choir will perform in downtown Lawrence as part of an all-ages, advance ticket show (priced at $28). Promoters will close down and fence off most of the 900 block of New Hampshire Street, with the stage sitting at the north end of the site.

"Wilco is a very special band that appeals to a very broad spectrum of fans," says Brett Mosiman, owner of Pipeline Productions, who is organizing the event.

"In my mind, they are the perfect headline artist because they are not too young, not too old, not too loud, not too mellow. They're really, really popular, but not so commercial that we close downtown with mass hysteria."

When apprised of the unusual nature of the gig's setting, Stirratt replies, "Well, I guess we better bring it."

As for what to expect musically, the bassist says a five-night residency in February at Chicago's Riviera Theatre allowed the group to "reach back" into its vast catalog of songs.

"Lawrence and Kansas City are some of the oldest territories for the band. We assume people know us a little bit better there than other places. But it's still pretty heavy on (current record) 'Sky Blue Sky' and 'Yankee Hotel Foxtrot.' Then there'll be some obscure stuff," he says. 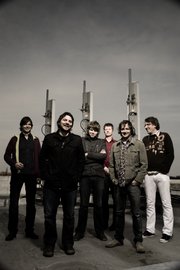 Chris Strong/Special to the Journal-World

Wilco will perform Wednesday at a ticketed outdoor concert in the heart of downtown Lawrence.

One look at Wilco's history at the Grammys gives a quick indication of the evolving diversity of its compositions.

The band received a nomination in 1999 for Best Contemporary Folk Album, won in 2005 for Best Alternative Music Album and was nominated this year for Best Rock Album.

"It's in a box right now," the Louisiana native says of his actual Grammy Award.

"I moved. I had an office in the old house, and I don't really have one now. We're going to remodel, so maybe it will come out then. Maybe it can go on the top of a big bookshelf or something. I'm not going to put it on the mantle. It's not a good-looking enough object to go on my mantle. That's like something out of 'Cribs.'"

The 40-year-old musician continues to explore side projects in addition to Wilco. He still writes and performs with The Autumn Defense, an indie rock duo he formed with multi-instrumentalist Pat Sansone. He also recently released an album with his twin sister, Laurie Stirratt, who just appeared with her band Blue Mountain in Lawrence last month.

Although the birth of his 17-month-old daughter has added that much more to his proverbial plate, Stirratt is taking advantage of the fact that Wilco is embracing more downtime compared to last year.

That said, he's looking forward to the next musical adventure with the acclaimed group.

"It's been an amazing culmination to have this band appear after so many years and be the best live version of the band," Stirratt says. "I'd like to make records that we feel are even better than the previous one. The goal is to make the next record really surprising. ... But I'm proud of every record. I'm proud looking back."