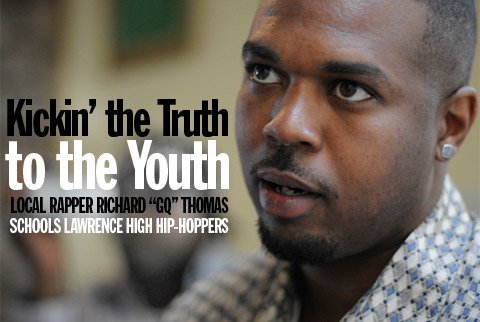 Who is that rapper poisoning the delicate minds of our youths with the hippity-hop?

After searching low and high, we found that it's none other than local rapper and BombSquad member Richard "GQ" Thomas.

Each Monday during the past school year, a group of seven Lawrence High School kids met for a weekly hip-hop class, with Thomas serving as their Dalai Lama of rap.

We caught up with Thomas, a 1993 Lawrence High graduate, to discuss local hip-hop, the youths and negative perceptions of Da BombSquad following the murder of one of the group's members.

lawrence.com: What's your message to the kids of Lawrence High?

GQ: I'm probably part of the worst-case scenario as far as hip-hop goes, being a BombSquad member. In a political sense, my guys are the "bad guys." But hip-hop is not a club. Hip-hop is not Last Call. Hip-hop is not the Granada or the Bottleneck. Hip-hop is these kids, you, me, people that express themselves in rhythm and poetry.

So I take that knowledge that I've got and I tell these guys, "Stay real with your lyrics. Don't be from New York with a 785 area code. Make the lyrics and the content of your music stuff that you can take home to your grandma who's down the street, your aunties and relatives, friends and family."

When I first came into the rap group, the first week or so was pretty much me just telling these guys, "Keep it real. Don't imitate. Be authentic and understand that your community is just as good and should be praised just as much as any ghetto or project building that everybody seems to love as far as hip-hop goes."

If you're from a pissy project hallway, then that's "real hip-hop." That's what everybody wants in our nation because it represents that struggle, it represents that hard time. But the game has changed. All the rappers talk about is money. All the rappers talk about is, "I want to sell this many CDs." I would assume I'm in a predominantly white community. If I want somebody to sell my music to, I need to make sure it's for the people that live around me. This is what I'm telling my students. That was the concept of, "Keep it real."

I told those guys, "If I was Bad Boy Records, if I was a major label, you guys would have to be ready. You guys aren't ready. You guys aren't taking this serious. I went to Lawrence High. There wasn't nobody talking 'bout no rap group, bro, uh-uh. You couldn't even bang on the hallway lockers and be rappin'. No, it was 'Get to class.' It was serious like that." So here it is, I'm a graduate of Lawrence High, I get to come back to my school, rock the stage two or three times before I got invited to do hip-hop class. So that phone call was like, "Whoa. That's big."

None of our positive influences are saying, "I know you all kids is gonna do rap. Just take it easy, keep it real with Lawrence, Kansas. You guys are living the good life compared to the Bronx. That's why those guys talk like that." Who's encouraging our kids not to fall into that trap? I'm already an adult. I can see the difference-that's some bullshit and that's some good music. They just listen to whatever's at the party, whatever the next kid said was cool, whatever got enough beat in the trunk. And now they're lost.

Let's quit saying how bad shit is-"I'm from the projects, but I bought me a Bentley, I'm from the projects, I got $500,000 on my neck"-well, it ain't so f*cking bad, is it? Why you still talking about them motherf*cking projects? Grow up and do something with yourself. You got hundreds of millions of dollars. You're still portraying the drug dealer's image, but you're sitting on hundreds of millions of dollars. That's ass backwards.

You're not putting unrealistic goals in the kids' heads, leading them to believe they'll be professional rappers? Shouldn't they concentrate on math?

They can make money off of it. You can make your own music at the crib. You don't got to worry about nobody scheming and scamming you. There's just a music program you can get and you can make your CD at home, you can sell it on MySpace, you can sell it on the internet. You don't ever even got to leave your house. Parents can be safe with their kids doing hip-hop now, if you take care of them like you take care of them with their Nikes, with their basketball camp. Go ahead, spend $300 or $400 on a new program, let him go down in the basement and rap, let him go down there and express himself.

People who have a negative perception of hip-hop-and Da BombSquad, with the attention from Anthony "Clacc" Vital's murder in 2006-probably wouldn't approve of a taxpayer-funded hip-hop class taught by a BombSquad member. What would you say to that?

BombSquad was an effort from a lot of local guys who have been through a lot of negative life scenarios. And Keith Loneker, the guy that did Lock-N-Load Records, did his best for the sake of getting us to understand that that same portrayal of a decent life is OK. We were that little grimy bunch of guys, but he was our hip-hop teacher.

Young black males, we are supposed to be robbers, thieves, drug dealers and killers and have no mission in life. The seven of us guys in the original group, we all just said we wanted to do something positive for ourselves and for our town. Let's show the community that we are worth something more than this image, such a negative image on top of that. That was the overall goal of BombSquad: Let's prove we are worth something. We're not just these no-good-ass bad kids.

And (Vital) was the one that was murdered. That was another asshole who did that. He didn't kill nobody. He got killed. Is he the bad guy 'cause he was on the CD? That is crazy. Â»