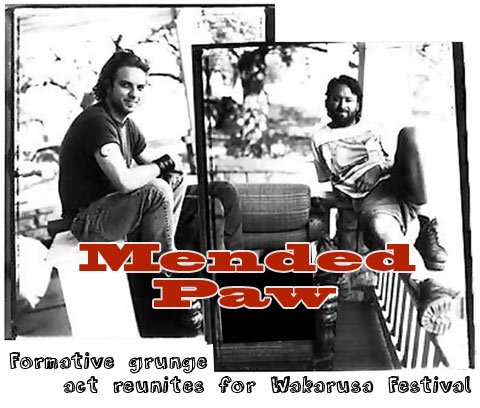 Paw photo circa 1992 featuring Mark Hennessy (at left) and Grant Fitch (at right).

To many in Lawrence, Paw's story is well-known. Their success with the song "Jessie" and two well-received albums, "Dragline" and "Death to Traitors," eventually led to a breakdown with their label, A&M, which shelved a third album. After coming back up for air with "Home is a Strange Place" in 2000, infighting and a departure of both vocalist Mark Hennessy and guitarist Grant Fitch seemed to signal a definitive end to the band.

Yet, both members found themselves happily back in town, and as a result of a shared billing between their new bands, both Hennessy and Fitch mended their fences and will be returning to the stage at the Wakarusa Festival.

Fitch and Hennessy joined lawrence.com for a beer at Louise's Downtown to reminisce and discuss their reunion and evolving musical sensibilities.

To many in Lawrence, Paw's story is well-known. Their success with the song "Jessie" and two well-received albums, "Dragline" and "Death to Traitors," eventually led to a breakdown with their label, A&M, which shelved a third album. After coming back up for air with "Home is a Strange Place" ...

lawrence.com: So you are playing Wakarusa this year. Is this a reunion of sorts or more of a one-off performance?

Hennessy: It's a reunion of sorts in that we haven't played in eight years. Right now this is the one show we're promoting.

Fitch: We're going to do more shows this summer. It's a really natural thing for Mark and I to be playing together. It'll be really difficult for us to not be doing something new. It's a reunion in that he and I are coming together physically and making art together.

What brought you back to Lawrence?

Hennessy: I left Lawrence to get away from a lot of self-destructive behavior. I left town, cleared my head, went to school. I came back with a clear head and having been accepted into a program at KU. It was fortunate in that this is where my wife wants to live and we have her to thank in no small part for the show at Wakarusa.

Fitch: It's a funny place. Even on a rainy day it's sunny in Lawrence. I call it "Life Under the Egg." It's always a blue sky.

Hennessy: The girl at Black Thorn-she calls it "The Velvet Rut."

Fitch: We're both raising kids and trying not to work too hard, trying to be positive and add to the cultural capital of the town as artists. Where better to do it than here?

Are you working on new material?

Hennessy: Right now we're just trying to get ready for the show. We have not worked on new material yet, but already in playing the old stuff we have had to make it new or reimagine it. Grant said something nicely-we're not trying to recapture some faded glory thing and we're not trying to replay some tape. We've evolved as people and musicians.

Have your tastes changed?

Hennessy: They've evolved to include more types of music. I still love everything that I did when I was a kid but have come to embrace kinds I never thought I would.

Back in early Paw days, what were your favorite things about Lawrence?

Fitch: I really liked the smallness of it.

Hennessy: Yeah. We used to live in a house where Free State High School is now and there was nothing out there and I remember one day sitting on the porch and seeing a big, 10-point buck. You could see all the tornadoes.

Fitch: We had the all-nude skeet range.

Hennessy: You could always park on Mass. Street. When the students would leave in the summer you could ride your skateboard down 9th Street.

Fitch: And much like today, Papa Keno's isn't crowded. We were just turning 21 in the early '90s. We were huge music fans. So you loved the Beatles and Jimi Hendrix and the '60s explosion, but this was something we had that was our own.

Hennessy: We opened for Nirvana at the KU Ballroom and we had those guys over to our house on Indiana.

Fitch: We also played with them at the Outhouse. The big joke is that there were 30 people at that show, but if you ask any one of 10,000 people, they were all there. It was a cool time.

How is your music changing?

Fitch: He's in another band called 1950 D.A. I'm in a band called the New Franklin Panthers and the two bands came together at the New Franklin Panthers record release. Mark and I had a little what I like to call a teary-eyed best friends speech, or moment. We hadn't had really anything to do with each other for almost eight years and it was cool that we were both playing in our different bands.

Hennessy: If you look at a flyer for the upcoming show you'll see a hatchet with cobwebs on it:it's not like returning to something from eight years ago and it's not like the chair that's too small when you go back to your third grade classroom.

What does it mean to you to have a new audience for your music?

Hennessy: Do they like to rock? If you just engage in what you're doing in an honest and joyful way, it'll be entertaining. Â»

After reading this, I'm actually sad I'm not going to Wak. Oh well.

Going to have to break out my "Bone. Crushing. Grunge. Metal." shirt for this one (though it's a bit small now since I made if back in '91!)

I was lucky enough to catch the Waka show and it was amazing. Just like old times... I'm jazzed that they're also playing the Record Bar on my birthday - July 26th! Wouldn't miss it!!