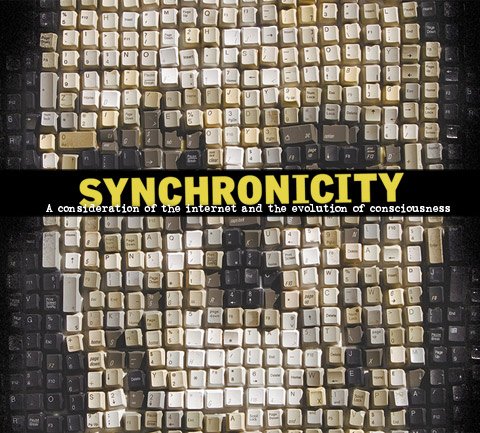 Thanks to the internet, all of the drama, emotionalism, and occasional comedy of the 2008 U.S. elections have resonated far more widely-both here and around the globe-than ever before.

Much has been written about this, the first truly wired U.S. election. That's not exactly our concern here, though. Our concern is relatively elusive-it's what to make of the broadening, more unified awareness ushered in by the internet:

What if the internet was merely the model for the next step in consciousness? Suppose ultimately we will all be innately attuned to a singular consciousness-whether via something like the internet, or via something far more advanced. Suppose humans, like trees and bees, are just one of the instruments of Earth's evolution. That's generally the idea behind the so-called "noosphere."

Welcome to the Noosphere

Plato generally gets credit for the idea of the Earth as a living, sentient super-organism, but it's recorded roots go back to ancient forms of Hinduism. The concept that the Earth is alive was first introduced to science in 1785, to tepid response. NASA scientist James Lovelock re-introduced the subject, which he called the "Gaia hypothesis," to the burgeoning New Age movement of the late 1960s.

Gaia supposes "...the earth's living matter, air, oceans, and land surface form a complex system which can be seen as a single organism and which has the capacity to keep our planet a fit place for life."

Connectivity is central to the Gaia hypothesis-that all things on the planet work together unconsciously and harmoniously for the growth and wellbeing of the Earth. And, if the Earth is a living being, then it too must evolve-though not in strictly Darwinian terms. The Gaia hypothesis allows that evolution is also "creative"-middle ground, perhaps, in the evolution-intelligent design debate.

In a comprehensive 2007 article, "The Noosphere, the internet and Other Related Concepts," writer Willie Maartens describes the noosphere: "Like a real brain, this network is an immensely complex, self-organizing-system that processes information, makes decisions, solves problems, learns new connections, and discovers new ideas. It plays the role of a collective nervous system for the whole of humanity. No person, organization, or computer is in control of this system: its 'thought' processes are distributed over all its components."

Now here's the mind-blower: some noospherically inclined scientists and philosophers, most notably mycologist-genius Paul Stamets, are proposing that, using humans as instruments, the Earth invented the internet for its own survival. And everything on Earth at this time-living and non-living-is a crucial part of the transformation.

Increasingly, the internet is being used as a measuring tool, counting and grouping page views and referrals and click-thrus and so on-as evidenced by the torrent of statistics online coming out of the national elections. If we're looking for signs of the noosphere's coming, the elections, in fact, are a good subject for internet-noosphere comparisons.

The internet is a vast clearing house of information. All that data from around the world yields perspectives both broad and specific-we see both the forest and the trees. In the online political world, polls and surveys (and compilations of polls and surveys, like FiveThirtyEight.com) give us a hazy view of the big picture. Meanwhile the media, countless bloggers, and watchdogs like FactCheck.org focus on details.

This expanded, more intimate awareness of life beyond our immediate situation is the noosphere's first baby step.

Artist Jonathan Harris has been trying to take subsequent steps with his WeFeelFine project. For several years now, Harris has been "harvesting human feelings" from around the internet and compiling them at WeFeelFine.org. "Do women feel fat more often than men?" "What do people feel right now in Baghdad?" etc.

The project searches recent blog posts for the phrases "I feel" or "I am feeling." When it finds one, it records the full sentence, and identifies the "feeling" expressed (sad, happy, depressed, etc.). The result is a growing database of millions of human feelings.

Of course these feelings do not happen in a vacuum. In very human fashion, the data that forms the internet can be persuasive. It can even be a sort of conscience. Politicians know this well now, as the ease of media creation and the reach of social networks instantly transmits any gaffe or contradiction, any voting irregularity, even an abashed candidate's private emails.

The larger the datasets on the internet become, the more this wired world of ours can be used to describe the future. Nate Silver, the former baseball statistician behind FiveThirtyEight.com, employs "statistical poetry" to predict election results. By mining and organizing vast amounts of data, he calculates probable scenarios of the future, with a good success rate.

The noosphere described by Maartens exhibits striking similarities to the internet. If this the noosphere is indeed in the making, then the big question is: how do we handle it?

Meme, Myself and I

A meme is a thought virus; an idea that catches on. Saddle shoes, the Red Scare, tattoos, web acronyms (LOL, OMG, WTF), "Change we can believe in"-all are memes.

There is no more hospitable venue for the proliferation of memes than the World Wide Web.

There are countless memes on the loose related to the noosphere, but perhaps the most prevalent are the doomsday memes-those that favor fear over hope. Comet collisions. The rogue Planet X taking aim from the asteroid belt. An overdue eruption of the bulging Yellowstone super-volcano. A collapse of the magnetosphere and the attendant pole shift. Global economic collapse. Nuclear war, martial law, and totalitarianism. The 2012 meme-a particularly enigmatic one that, depending on your mindset, focuses on the specific year that will bring either transcendence-hello, noosphere-or Armageddon. Native American Hopi prophecy holds that the world is now in the state of Koyaanisqatsi, "a world out of balance... a state of life that calls for another way." A sign that the move into the Fifth World has begun is: "The land shall be crisscrossed by a giant spider's web."

Despite the marvelous inventions of the human mind and the very neat trick of consciousness, in today's world our predominant memes are cynical, dark, and destructive. Perhaps the outcome of the elections will be a step in the right direction, but without some serious memetic content management, humans risk coming to the noospheric conversation with a bad attitude and the wrong information. If we truly aspire to knock on Heaven's door, we have to clean up our mental acts. Garbage in, garbage out; you reap what you sow; you're only pretty as you feel... It's just a thought.

A few of the more interesting noosphere-related resources I came across... post yours in the comments section below.

¢ Techpresident: How much is YouTube worth to Obama and McCain?

¢ Computerworld: And the winner by a landslide is YouTube

¢ Shifting the Debate: Measuring the Movement of Ideas through Social Networks

¢ Vernadsky: The Biosphere and the Noosphere

¢ Global Consciousness Project: Registering coherence and resonance in the world at Princeton University

¢ Paul Stamets' TED talk: "Six Ways Mushrooms Can Save the World," wherein he proposes that the Earth invented the internet.