Time in lawrence: around 2 years 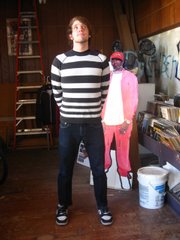 What were you doing when scouted: Earlier today I was playing some music, and now I'm at Love Garden checking out some records.

How would you describe your style: I'm not really one for fashion, but I do have to wear clothes.

Where do you get your hair cut: I have people who cut my hair for me for free.

Favorite trends: I am a big fan of obscure vintage t-shirts. I really like when people just express themselves and dress independently.

Least favorite: I don't like North Face jackets or when girls wear leggings as pants. I also like those plastic rain boots are the new Uggs.

Favorite coffee shop: I'd have to say Milton's and Henry's, because they both have good coffee, and I like the music they play at Henry's. It's a good place to study.

Favorite hang-outs: I like going to shows at the Granada, and occasionally I go to house parties, but I mainly like to sit at home and read.

What are you reading: Crime and Punishment, by Dostoevsky.

Tell us a secret: I love Dungeons and Dragons, and I love FLCL.

shoes: Nikes, purchased from Famous Footwear, 1 month ago for $40

jeans: Levis, purchased from ATC, a few months ago for $12

belt: stolen from a friend of mine sometime this summer, free.