You work in the concert biz...are you constantly awash in groupies, heroin, and heroin-stuffed groupies? Is it the further decline of western civilization each and every week?

"Yes. You would not believe these kids. When I work bigger shows, like at the Beaumont in Kansas City, there are usually always groupies lurking about. I usually have to go on the band's bus to bring them food or to talk to the tour manager and sometimes girls will ask me if I'm with the band or if I can let them meet them. I give my standard glare/eye roll and groan 'No, I'm not with the band, I'm working.' And it's always the grossest girls that get on the bus, which baffles me. One time I was on a band's bus after a show waiting to take some of them to their hotel and I had to wait for some of them to finish getting, ahem, 'serviced' before I could take them. Lawrence, I'd like to salute you-you are far less slutty than Kansas City. Also, I once had to almost run over about 30 rabid Hanson fans. And I will admit, I once had a brief-but torrid-eye contact affair with Jack White. I'm only human, after all." 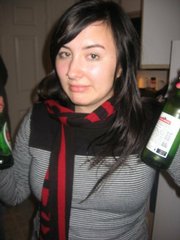 What's the trick to getting people to a show? Fliers? Bribes? Mind-controlling nano-bots in the water supply?

"Good question. We've definitely noticed a lull since the economy decided to crap out on us. Flyers are always good and we've been doing a lot of stuff on those Facebooks and Myspaces that the kids love. We usually place ads in the Pitch, KC Star, and your lovely publication, lawrence.com, and place spots on radio stations that fit with the show. But there's nothing like a show that sells itself. It's a tricky business. We have to charge a certain amount so that we don't loose all our money and our marbles. Sometimes people get pissy about having to pay $10 to see a show at Jackpot, which I totally get, but the general concert going public doesn't necessarily understand all that goes into booking a show. So please-buy tickets to shows so everything doesn't all go to shit."

What's the most hedonistic/stupid/bizarre thing you've witnessed or heard of while working in this field? You don't have to name names, just use aliases like "Shminsane Shmown Shmosse."

"I have witnessed many a stupid thing working shows. Probably my most ridiculous day was with a band I'll call 'Numbering Birds.' I had to buy them 20 limes, wash a pair of the lead singer's underwear and jeans, and enlist my photographer roommate to take his passport photo and go out and buy him organic toothpaste right before he went on stage. Also, two of the nicknames that I've acquired from working here for the past 3 years I got from tour managers. Once the tour manager for The Format called me 'Mamma Bear' in passing and everyone that I work with has not let me forget it. Another time, a tour manager thought my name was 'Laurel' and called me that all day, but I was too awkward to correct him. It eventually blew up in both of our faces at the end of the night. There's always the random band looking for pot or the bigger band asking for coke which is always a weird situation. I've been pretty lucky to not have to deal with too many Naomi Cambell outbreaks from bands-yet."

Is the Lawrence music scene, as people bitch about every five years or so, deader than Ledger?

"I beg your pardon! I may just be a naive whipper snapper, but I am kind of in love with the local music scene. There's a bunch of great things coming out of things like Range Life and Chomp Womp. All you have to do is see how many people show up to a Fourth of July or Ghosty show to see that things are happening here. As far as national acts that come through, I'm always getting excited. M.I.A! Jenny Lewis! Sonic Youth! And the best shows are ones that have really great local bands opening up for national touring acts. I like to think we're little dream weavers, giving local bands the chance to open up for national acts that will hopefully get them noticed by agents or labels."

Favorite show you've been involved with here in town?

"I'm always happy to be involved in shows that have a ton of buzz around them. It makes the night more exciting when you know everyone's going to be there and have the best time. And it's always fun to be a part of the shows where people say 'What! THEY'RE coming to Lawrence?!' M.I.A. was that sort of show. People were super excited and we sold out the show and it was great. It's nice to say that my day at work consisted of hanging around the M.I.A. show waiting to see if she needed anything."

"It's a risky business. You're basically spending a ton of money hoping that people still care about music. And sometimes they don't. You can insert a sad emoticon here."