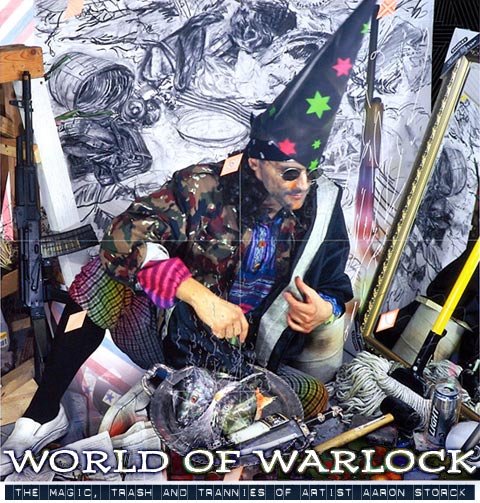 Between his penchant for wearing rotting produce and his predilection for displaying spread-eagle she-males, one might expect to find Aaron Storck rooting through a dumpster or yelling at cats in a back alley. While Storck does indeed revel in filth and fantasy, it's not because he's off his meds-it's in service of his art. The Bronx-born Storck came to KU to study art and has split his time between New York and Lawrence, developing this unique vision of magical debauchery. He's just opened a show at the DotDotDot Artspace, "Wizard Ningxt," blending virtually every media known to humanity to address topics ranging from the housing bubble to Iraq. "It's going to be a challenging, provocative, weird show," promises the artist occasionally known as Salad Man. Storck joined us to discuss wizards and women with willies. 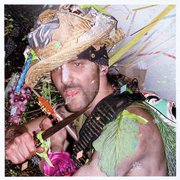 Storck: So far as the wizard and the magic, I don't really believe any of that, but these things become a metaphor for unknown aspects of nature. I'm also thinking of a lot of issues of the day like the economy and just where we are as human beings, especially the ethics of the systems that we live in and the morality we choose. I feel that all these things are relative and go through changes over time-evolutionary changes. The magic theme is a way to introduce new, far-out themes that don't have grounding in reality-dreams of what our reality could be like.

Are these dreams or self delusions?

They're definitely self-deluding. Part of what I'm doing with the magic theme is to pull out some of the aspects of the way we live right now that we'd rather not think about. I'm focusing on a black magic obsession with power, human folly, and failures of various kinds. That's mixed in with a more positive enthusiasm for human potential.

Speaking of failure, you're kind of obsessed with the collapse of the housing bubble. What's the connection between our current financial crisis and chicks with dicks?

The transsexual I have in the show is this very good looking, Thai lady-boy. I may be exposing myself to those who want to make fun of my sexuality, although I'm not into lady-boys-I consider myself straight. I'm trying to assault the viewer with this "Crying Game" moment. I have several pictures of her looking almost like Sharon Stone, but then you see this erotic shot with her dick and asshole. I love the idea that this transsexual person is able to use modern science to doll themselves up. It gets into this area of creativity that I feel I can draw to the housing market, with the loans and the creative finances that have lead to the wild speculatory stuff. I want to compare the housing boom itself to the transsexual, as an awesome new approach to life. These new housing developments are very alluring to a lot of people-likewise are these transsexuals. I love the idea of there being various sides to things.

You get a sexy sub-prime loan, are wrapped up in this awesome new house, then-boom, unexpected dick. Another one of your recurring themes is trash and garbage. Is this an ecological bent to your work, or were you just a fan of Oscar the Grouch?

I actually was a fan of Oscar the Grouch. Speaking of kid references, I also remember the Fraggles from 'Fraggle Rock' would risk danger by running out of their cave to get to the trash pile. The trash pile would speak wisdom to the Fraggles, like an oracle. So, I had supported the Iraq war at the outset, as I had supported the housing boom at its outset-I was seduced by some neo-con ideas. During 2003, at the height of the Iraq war, I was living in New York City and had broken up with a girlfriend. Every day in the New York Times, there were photos of charred corpses and burnt bodies. Just depressing, fucked up stories-horrible nightmares that you could hardly believe were real. I was walking my dogs down by the East River and there was all this garbage and trash and weeds down there. It became a metaphor-the byproduct of our wealthy, lovely civilization here in America that we all get to prosper from. I came up with a character named Salad Man, who's covered in trash like an idiot or a sort of American clown. He represented all of the contradictions and weird, fucked up things America does like in Iraq. I'm not being judgmental, since this system allowed me to be a lucky person who's able to pursue art. It's just what it is. 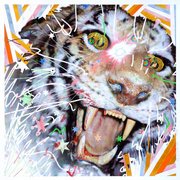 A recent piece by Aaron Storck

"Wizard Ningxt" is going to be a multi-media extravaganza, with you venturing outside of your foundation of two-dimensional work. What are some of the challenges of pulling of a show of this scope?

A few years ago, I came upon this idea of configuring all these various practices. Branching away from just painting and printmaking, I began to take photos, then some web development, sounds and music, writing, performance-it was a real theatrical approach. With this show, it's the first time I've tried to tie everything together. It's going to be a little bit rough, I imagine, but I'll get better at it over the years.

We'll see what they think of it down there. Sometimes the people from the Cross Town Tavern come into the gallery-I'm eager to see how they'll react to this horny-ass trannie picture.

I've seen some of the prostitutes down in that area-I think it'll go over just fine.

You think? Cool. Maybe I'll be able to sell it.

That's a great question. In New York, the place itself really lights a fire under your ass. When I was there, after I'd done my BFA at KU, my work got a lot edgier. I wanted to grow a lot more as an artist and rapidly spread out into various mediums. New Yorkers are extremely hard working, by and large. The energy of the place and the steep competition, in terms of the quality and the sheer volume of work, can really get somebody's perspective straight. Out here, it's much more isolated and pretty laid back. I think this is a great place for art as well. You can make your work and enjoy your life. I love Kansas and I love Lawrence. New York kind of makes me feel crazy, but it's a great place to do business.