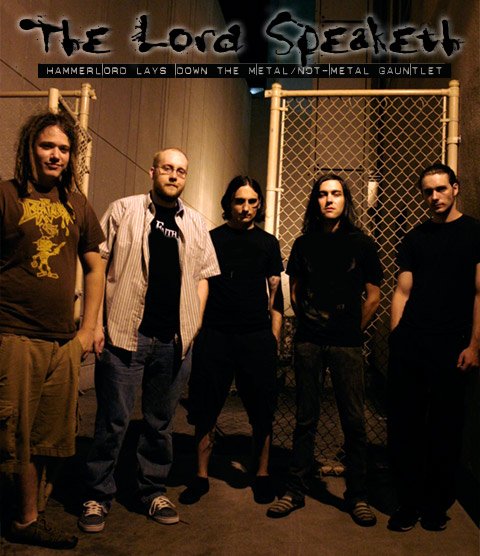 It's so hard to tell what's metal these days. Ever since Metallica took its eyes off the prize and Limp Bizkit made us all exclaim "There is no Sataaaan!!!" it's all been a blur. System of a Down? Please. Dude sings like Andrea Bocelli. Korn? The guitarist left the band to worship Jesus. Wolfmother? The Darkness? You're joking, right?

Thankfully, it takes about two hellraising seconds to figure out that Hammerlord is most definitely metal. Earth-scorching guitar leads, double-bass-drum blasts, guttural vocals, lyrics about spilt blood and the "Throne of Azathoth" metal like the wolf. It's even got a drum solo on it how metal is that?!!! Plenty of bands would give their first Anthrax tape to be this metal, but few succeed so quickly and convincingly.

Hammerlord's Ã¼ber-metal pedigree stems from its members vast realms of experience with bands like The Esoteric, The Blinding Light, Caligari as Sentient as well as the zillions of hours guitarist Ty Scott must have spent in his bedroom with Steve Vai tabs and microwave dinners. Scott and fellow axeman J.P. Gaughan shred their brains out on Hammerlord's debut self-titled LP, and drummer Adam Mitchell (the original "Hammerlord") is a Guitar Center clinic on 'roids. In other words: Cradle of Filth just shat their leather pants.

The Lord Cometh: An interview with Hammerlord

Hammerlord's über-metal pedigree stems from its members vast realms of experience with bands like The Esoteric, The Blinding Light, Caligari as Sentient as well as the zillions of hours guitarist Ty Scott must have spent in his bedroom with Steve Vai tabs and microwave dinners. Scott and fellow axeman J.P. ...

lawrence.com: I'm going to throw a series of things at you and you're going to tell me whether they're metal or not metal. Are you guys up for this?

Since it's election day, we'll start with the obvious Barack Obama.

Cruz: Not metal : Everybody that's tits over the record is like, "Dude, it's so much better than 'St. Anger.'" My farts in the morning are better than "St. Anger." You gotta compare it "Master of Puppets" or "Kill 'em All," and there's just no comparison. It's way more metal than anything they've done recently, but Metallica broke my heart a long time ago, so I'm going to say not metal.

Cruz: Uh, he had that metal record, but he's not metal.

"The Lord of the Rings."

Mitchell: Oh my god, so metal.

Cruz: The most metal.

Mitchell: One of my favorite bands is even called Amon Amarth, which is basically Sauron's Tower. And there's another metal band called Gollum.

Cruz: According to The Lord (i.e. Hammerlord), Lawrence is "The Shire."

Henceforth Lawrence shall be known as "The Shire"?

Cruz: It's our shire. You're a hobbit too, Richard.

Mitchell: Metal has changed a bit in the last 20 years, but for the time he was very metal. He's got a very metal attitude.

Cruz: Early Mtley CrÃ¼e is not really metal, but it inspired some metal.

Cruz: If they got puffy paint.

Mitchell: If Ty were here, he would say very metal. It's a thrash-metal thing : So yeah metal.

Cruz: But they've never really had a very metal song. Their outfits were metal and the imagery was metal, but they were rock and roll.

Mitchell: I would say not metal.

Cruz: And he's definitely a douchebag. Not metal.

Cruz: Is that the guy that got us into this huge economic crisis? It's all his fault. That's pretty grim, dude. I think he's metal. He's bringing on the end of the world.

Mitchell: The end of the world is really metal. Yeah, I'd say metal.

Mitchell: Are you kidding? That's super metal. Their whole reason for existence is just to smash things.

Cruz: And they're made out of metal and they smash other metal. 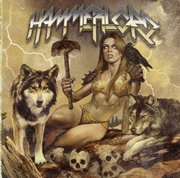 Cruz: What's not metal about Topeka? You need metal in Topeka, and Topeka has bred some pretty sick metal : It's a dark place.

Mitchell: It's so metal it's not even worth talking about.

So what's not metal about Topeka?

Cruz: Yeah, I'm going to go with him on that.

Cruz: I'm going to say metal. If it wasn't for them, there would be no Hammerlord at least not for me or Ty. Especially the guitar work, let alone David Lee Roth doing his own thing with Steve Vai : Those solos are metal as hell.

Mitchell: I'm going to say that Van Halen is very metal. But Van Hagar is not metal.

Funny! This band is truly bad ass!! It's just nice to see a drummer that rips so hard. I just wish people actually knew what they were seeing and hearing. I don't think most people in this area really know how bad ass this actually is unfortunately :(