EA continues their extremely surprising trend of introducing new IPs with Mirror's Edge, a parkour-inspired action game. It features a great first-person perspective that really puts you in the action, but some of the gameplay decisions bring down what could have been a great, innovative experience.

The real star of the game is the platforming, as you'll get a rush leaping from rooftop to rooftop with one of the most immersive first-person perspectives I've seen in a video game. You don't feel like you're controlling a disembodied camera with a gun, it feels like you're controlling an actual person. Sprinting around turns, leaping over fences, and shimmying across ledges looks and feels very realistic. Metroid Prime was the first game with a first-person perspective that really seemed to get the feel of jumping right. Mirror's Edge not only gets jumping right, but its realism succeeds on multiple levels. 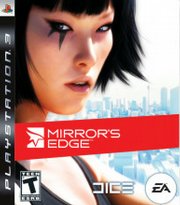 Unfortunately, the game isn't all running, jumping, and sliding. What could have been an extremely innovative experience gets brought down substantially by the inclusion of a very generic action element. Instead of simply exploring the city, you're being hunted by various SWAT teams and cops. It includes very sub-par weapon and combat elements, and gunplay feels extremely out of place considering how new the rest of the experience feels. It basically consists of sprinting up to an enemy, slowing down the action, and pressing the disarm button when his gun turns red. It's basic, it's unnecessary, and it doesn't belong in this game.

Standing on the rooftops, you'll get a sometimes breathtaking view of the city around you. You'll hear sounds coming from the street, and there is a palpable sense of danger when you jump from the top of a crane to a roof below. Unfortunately, the game's color palette looks like the contents of a bag of Skittles and the awful cutscenes look like eSurance commercials.

While the rooftop sequences are occasionally great, the game suffers quite a bit when the action is brought indoors. Basic switch-and-button puzzles and annoying platforming abound once the action leaves the rooftops.

Mirror's Edge has one great thing going for it - the feel and perspective of the platforming. Without that, it's just a generic action game with mediocre puzzles and combat. Despite its shortcomings, the platforming controls are stellar and would make already-great FPS games like Call of Duty even better. A little work on this franchise could turn it into something special.