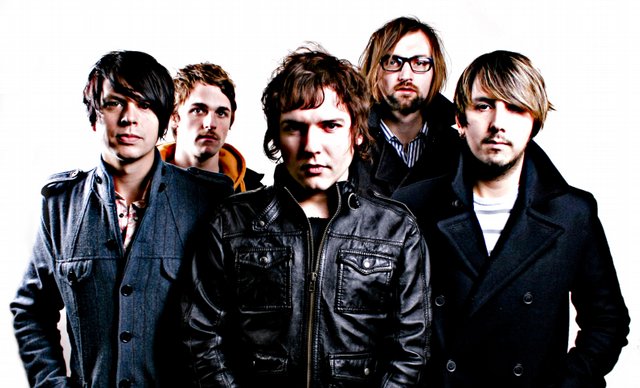 Tiger Beat: An Interview with Kenn Jankowski of The Republic Tigers

The quintet’s “orange and black attack” is a patently catchy exercise in man-vs.-machine principles: strummy guitars crashing against glitchy beats and swooning melodies. It’s a marvel of a thing when you really pay attention, but it’s just as easy to step back and sing along with a PBR at your lips. Never mind that one review that compared the Tigers to Enya; Radiohead or Coldplay would be far more apropos.

The group’s debut album “Keep Color” is so damn good that Travis invited the group to tag along for a recent U.K. tour. Now back in the states, the group is still touring hard and reaping mega-love from iTunes and video games like Tiger Woods '09. Singer and floor-tom beater Kenn Jankowski met up with us on the eve of his Thanksgiving trip to Alabama to shoot the ish and reveal his dark secrets.

lawrence.com: Now that you’ve achieved a little bit of notoriety, do you still have relatives who encourage you to try out for American Idol?

Jankowski: No. I think my parents watch American Idol, but they know my tastes and they know I think that’s lame … For a gag, it would be so funny to do it. I would do a really good job if possible. I would start by doing some David Bowie, then maybe “This Is Hardcore” by Pulp.

Have you ever taken performance-enhancing drugs?

You thought about that one a little bit.

Well, I was trying to think if alcohol is a drug, because I take a lot of alcohol for performance.

What’s your philosophy when it comes to drinking and playing shows?

I need to if it’s something like Letterman or a big show … I think about too many things (onstage).

How drunk were you on Letterman?

I wasn’t that drunk, but I had a bottle of Jack Daniel’s in the dressing room with me. John from our record label took it away from me before I got too far into it, so I was in the perfect state.

Would they give you a redo?

Yeah, I think so. Just knowing that it’s possible to get a redo makes you not mess it up. I actually forget where I was right before the third verse came up … I thought we were doing well up to that point so I was like, ‘Yes, home-free!’ Then I was like, ‘No – there’s another set of lyrics! Where was I?’

Have you heard the new GN’R?

I heard a couple songs. I think Axl might unfortunately be smarter than I think he is … I think the Juggalos will be into it, which is a huge fan base.

Do you have any strategy for tapping into that market?

Get to know the Juggalos who just go home and play video games – which is what I do, so they shouldn’t take offense. I worked at Domino’s Pizza in Lee’s Summit with a really nice guy who was a Juggalo … I found out that Vanilla Ice’s biggest fan base is Juggalos.

Was he trying to get you to become a Juggalo?

No, he knew I wasn’t. I tried to invite myself to his Halo night though … I tried to tell him, ‘I will do very well against you guys. If you want competition, you might need to get outside the box a little and invite someone who’s not a Juggalo’ … Maybe the reason I can’t find true competitors in the gaming world is because I haven’t been able to play Juggalos.

Have you ever autographed a body part?

Yes. Nothing R-rated though … I’ve signed inner thigh and top of breast with no nipple showing.

Is that kind of awesome?

Yeah, it’s weird. It’s not as weird now; I’m getting used to it – and that sounds so weird to say. I’m such a douche bag for saying that.

Have you ever signed an autograph while delivering a pizza?

No, not yet. I’ve only been there for three weeks (at the Papa John’s in Westport) … When I have to work a shit job, that’s what it is. I can write in the car and smoke while I’m working and I get tips and all I have to do is say, ‘Hey, here’s your pizza.’ I have to wear a silly uniform, but you know what? – it’s good for you. It’s good to work with a bunch of kids who think you’re too old to be working their job. It’s a nice challenge to not talk about your music experiences in that setting … It’s hard, when they’re all talking about their favorite bands and stuff.

How did you feel about the review that compared you guys to Enya?

I thought it was silly, but at the same time I hear what they’re saying. I used to listen to Enya in high school. Enya was on the Lord of the Rings soundtrack, and I wrote the music for “Golden Sand” right after the first Lord of the Rings movie came out. It has kind of a similar chord progression, which I didn’t realize until later.

What’s next as far as releasing stuff?

We did a Frank Sinatra cover for iTunes of “The Impossible Dream.” It’s almost impossible to cover a Sinatra song and make it sound cool because of all the jazziness. We tried once and it ended up really bad. Our next try ended up being one of my favorites.

What inspired the song “Made Concrete”?

The lyrics are just a story about my ex-wife and what happened to lead to us getting a divorce. It was sad when it was written, but it was therapeutic. Now I’m either soulless or over it.

OMG, WHO CUTS YOUR HAIR?!

So, this is a no-shit story. I'm here working in northern Pennsylvania, near a city called Towanda. I was there grocery shopping at 6:15am this morning, about 2 hours after reading this interview--I was the only patron in the entire grocery store. And wouldn't you know.....the familiar whine of the intro to Buildings and Mountains came on, right after a number by Sade. It was friggin' surreal. I'm singing at the top of my lungs along with the song in an empty grocery store, "WE'VE BEEN WAITING ALL OUR LIVES..."Still, I think the single selection should have been Feeling the Future.

But perhaps if that selection had been made instead of Buildings and Mountains, they would've never gotten a break, and I would never have had that experience in the grocery store in rural Pennsylvania.

I had a similar situation to Shelby this morning. I heard Buildings and Mountains at a Village Inn in Denver. CRAZY!

I'm sick of this shit! They are not the "best" band in KC because someone can market their shitty music and poser haircuts!! "Life and Times" and "Actors and Actresses" are two WAaAAAAAAAY "better" KC bands in terms of music!!!! Stop this stupid shit! WANK WANK WANK and double WANK!

I don't really want to talk bad about RT because I am happy they have done well. But I will say that mi2112 is right LOL!!