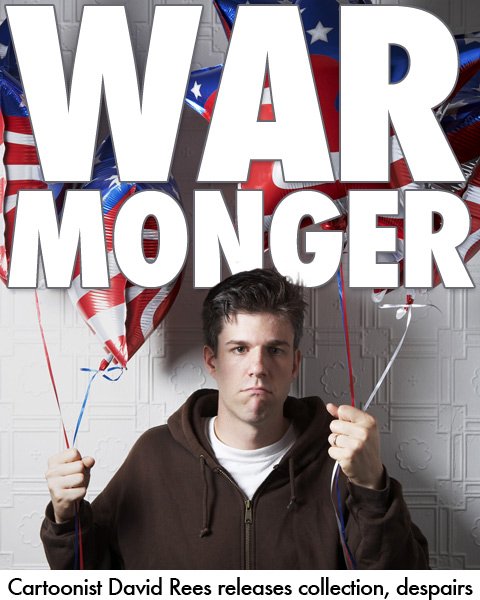 "Get Your War On" cartoonist David Rees.

Who knew that taking benign clip art of office toadies and filling their word balloons with blisteringly profane political commentary would propel you to the upper echelons of contemporary American satire?

David Rees, apparently. His comic strip, "Get Your War On," is carried by Rolling Stone and alternative newspapers across the country (including, FYI, lawrence.com at one point) and has recently been adapted into an animated series appearing online at The Huffington Post and 23/6 News.

"Get Your War On," filthy and Bush-bashing as it is, has exhibited in museums and been praised by the New York Times as a "glorious excoriation of our post-9/11 loony bin." To celebrate this week's release of "Get Your War On: The Definitive Account of the War on Terror, 2001-2008," David Rees graciously joined us to talk shit on a bunch of things.

Who knew that taking benign clip art of office toadies and filling their word balloons with blisteringly profane political commentary would propel you to the upper echelons of contemporary American satire? David Rees, apparently. His comic strip, "Get Your War On," is carried by Rolling Stone and alternative newspapers across ...

lawrence.com: The Bush years have been a golden age for political comedy. Since peace and prosperity aren't all that funny, does the prospect of an Obama presidency instill a sense of dread in you?

Rees: Well, my plan has always been to quit "Get Your War On" when Bush leaves office, so it doesn't matter to me who the next president is as a cartoonist. It obviously matters to me as a citizen, but my plan has always been to retire when Bush retires, and then hopefully enter into some sort of business venture with him. I don't know if I'm going to keep making comics. I had this cartoon I did called "Relationshapes" and I thought I could sell it to a women's magazine because it's all about geometric shapes talking about their feelings. I had no takers, so that kind of discouraged me. I don't know if I'll be making cartoons after I retire "Get Your War On," but hopefully I'll come up with another source of income.

What's the transition been like in turning "Get Your War On" into animated webisodes for The Huffington Post and 23/6 News?

It's been fun. They asked if I'd be interested in animating "Get Your War On," but at first I tried to pitch them on just letting me write about Thomas Friedman every week and tracking him and his movements. They insisted on animating the comic. I've always had this fantasy that, if I did animate it, I would try to just animate the shit out of it. Make it look so good and realistic and fluid, and not herky jerky like a lot of Flash animation looks. They suggested roto-scoping, like in that movie "Waking Life." So the same studio down in Austin, TX that did "Waking Life" is doing "Get Your War On." They made it look just like I wanted, as though someone breathed life into these clip art images.

Will you keep doing the animated series when Bush leaves office?

I have no idea. I have this feeling that if Obama wins, there's going to be an instantaneous burn out on social satire, and that in the few months between Obama winning and Bush leaving office everyone's going to stop paying attention to the news-unless Bush bombs Iran or something. If McCain is president, I'm sure there will still be a lot of satire. If Obama wins, then maybe conservatives will start generating more satire as opposed to foreign policy. I'd rather have all the conservatives making fun of me than endangering me with their dumb-ass policy ideas.

The news these days is almost a parody of itself. Along those lines, is Sarah Palin too easy?

She strikes me as the worst person I've ever seen. She clearly is not intelligent and I think it is totally appropriate to make that observation. Not only is she inarticulate, and not only is she inexperienced, but the real crime is that she obviously has had no interest in foreign policy or matters extending beyond the state of Alaska at any point in her life. I think that immediately disqualifies her. Not to mention that her religious views are idiotic and she is a genuinely petty, mean-spirited, and small-minded person. So you can make fun of any of those elements. I've spent some time making fun of her retarded views on abortion, but I think it's just as vital to make fun of all the people in America who were captivated by her when she first burst on the scene. Everybody seemed to think she was a great pick. I mean-she is such an idiot. The idea that John McCain would pick her as his running mate is insane. The end. You know, it is hard to make fun of it. It's like, "Are you f*cking kidding me? Is this all a game to you?" John McCain is such an idiot. Obviously satire just rolls off my tongue. You'll have to read that two or three times to get the subtext.

In this climate of a non-stop presidential election, have you reached the point of over-saturation? Are you near burn out?

Oh, yeah-totally. I reached that point in November 2004 when I was convinced I was going to be able to retire, but got a four year extension on my tour of duty. I can't stand it. I can't stand reading the news-it's depressing. I think the age of American affluence has totally come to an end. I think, like every empire in history, we've overextended ourselves through a combination of ignorance, hubris, and selfishness. We've written our own death warrant. I think the future does not belong to America, but to China and India. Afghanistan is totally spiraling out of control, things look bleak in Pakistan, I have no sense that Iraq is going to be a functioning society, and yet-as satirists-we're called upon to make light of whatever the breaking news is of the day and whatever that idiot-woman Sarah Palin said. So, yeah, I'm totally burnt out and disgusted with it. Was that too subtle?

"Get Your War On" was actually carried by lawrence.com when it first started. Do you think you can trace your fame and fortune directly back to us?

Yeah, but I don't like to admit that when I'm on the east coast, because we kind of have nothing but sneering contempt for all you people in the middle of the country. But when I'm alone with my thoughts, I have to admit that I owe most of everything to lawrence.com. I just wish that some of that authenticity that drips off of you guys like candle wax would rub off on me. I try to take your love of family and pies and, uh, quilts and bonnets, and share those values with my east coast friends when they're not doing cocaine or planning terror attacks or community organizing. Although my relationship with Lawrence has always been controversial because I know that you resent and envy me because I grew up in Chapel Hill, which is a better home for Roy Williams than Lawrence ever was. Chapel Hill could out-Lawrence Lawrence, basically. You ever hear that famous story about how Charlie Chaplin once entered a Charlie Chaplin look-a-like contest and came in second? It would be just like that-Lawrence would come in second in its own Lawrence impersonation contest. And you guys have some sort of sparrow or flightless dodo? In Chapel Hill we have a might ram, an alpha male. It does a better job of rousing Tarheels to victory than your ostrich or whatever. Didn't they license it to Fruit Loops? I'm just kidding-our two towns are friends.

Is it true you got drunk and played Scrabble at the Replay Lounge last time you were in town?

Hoo boy-yeah. I'm a big fan of the Replay Lounge. Last time I was in town, they had some deal where you could get a beer and a shot for .75 cents or something. I had too much to drink and I was playing Scrabble, and by the end of the night I was being really obnoxious and placing my tiles like constellations all over the board. I got kicked out of the game. I felt really bad about that. I felt I had alienated all of my new friends in Lawrence. There's probably a brutal whisper campaign or f*cking full throated screaming campaign against me because I was such a horrible Scrabble player. What can you do? I burned my bridges. I'm never going back to the fly-over states, anyway. I'm never leaving the east and west coasts. I'm just kidding-I desperately want the approval of the people of Lawrence. I apologize to the Replay Lounge and I apologize to everyone I played Scrabble with. Â»

GYWO is pure comedic GENIUS!! We can't wait until every Friday for it to come out. I watched "Moose Meat" like 15 times. That was the funniest one yet. When my husband calls home from work, I've been answering the phone "Accounts Payable". Sarah Palin and the Rape Kits - sounds like a punk band. Are they any good?