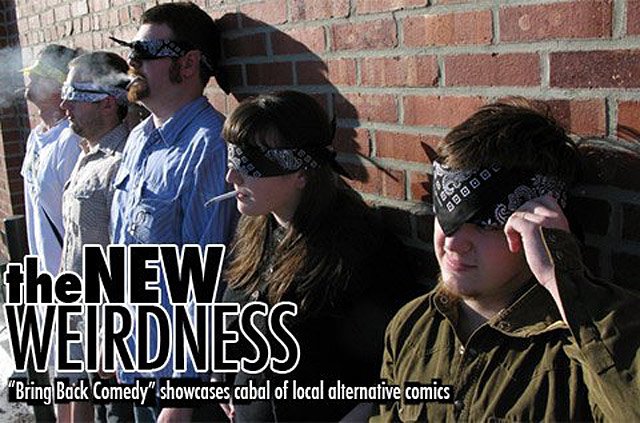 Hey, did you hear the one about stuffing children into a suitcase?

How about the one about the fire and brimstone preacher evangelizing for Norse trickster god Loki?

If so, then you've obviously been to "Bring Back Comedy." Begun last month as a venue for young and ass-clenchingly incorrect stand-ups, "Bring Back Comedy" has amassed a troupe of over a dozen Lawrence-based provocateurs. The show will make the jump from the Jazzhaus to the Bottleneck this month.

KU graduate teaching assistant and lifelong comedy nerd John Gibbons organized the ribald revue after making the move to Lawrence from Nowhere, Missouri. "Moving to Lawrence was like 'The Beverly Hillbillies'-'We're moving to f*cking Hollywood!' It was astounding there was more than one bar and a night life. There are people on the street after 9 p.m. It was amazing," says Gibbons, who was inspired by his new home to take the plunge into stand-up. "Right before my 23rd birthday, I got totally shit-faced on a bottle of wine and said, 'I'm gonna go do it!' I stumbled into the Bottleneck on an open mic night and they let me do it. There were, like, 8 people there. If you do it once, you can do it over and over and over again."

With little more than moxy and a penchant for cyber-stalking, it wasn't long before Gibbons was networking with other aspiring comics in the hopes of arranging a high profile and recurring comedy show. "It became sort of a Facebook manhunt for comedians. They just showed up on the first night and said, 'Here I am, and this is what I do,'" recalls Gibbons. "It was a very odd mix of people who had done stand-up before in Kansas City, improv theater people, radio talent, and about half of the group who had never done it before. They were people who had been funny their whole life and said, 'I've just got to try it.'"

The assembled talent wasn't exactly of the Jeff Foxworthy variety, however. It was a group of mostly college students steeped in the irreverent and cynical era of Mitch Hedberg and David Cross.

"Stand-up is kind of weird. There's still a stigma around it," says Zach White, whose routine involves repeatedly changing shoes on stage as he recounts a bastardized version of William Golding's "Lord of the Flies" and then invites audience members on stage to kick his ass. "Most people still think it's 'What's the deal with airline food?' or 'Men are different from women!' or 'Black people are like this:' I'm more interested in Steve Martin or Andy Kaufman style stand-up. My lifelong dream in comedy, since I was a precocious child, is to confuse as many people as possible."

Robert Curtis also counts himself as a child of the funny. "When I was growing up, it was comedy up the ass. I wasn't watching 'Power Rangers' or 'Batman,' I was watching George Carlin and Bill Hicks," says Curtis of his near demented obsession with stand-up. "I've been doing stand-up for almost 2 and a half years. I've been to a lot of garages and basements, doing it for $50 and free drinks-it was totally worth it."

"There's a broad spectrum of the types of comedians you'll see up there," says Ed Parker, one of more "traditional" stand-ups in the bunch "I'll tell a story or talk about this weird thing I saw on TV, as opposed to somebody like Zach who's doing more of an Andy Kaufman thing. There are a lot of alternative comedians out there right now who are opposed to just doing impersonations or saying, 'Hey, women are weird.' I like Patton Oswalt, Paul F. Tompkins, and guys who tell stories."

Just because they're a new generation of comics, though, doesn't mean they're above that most time honored of stand-up traditions-bombing.

"The worst show I ever had was only my third show. It was at The Crossing before it became a big f*cking hole at the top of the hill," shudders Gibbons at the memory. "They didn't even have a stage. I stood in front of the bar with a microphone that I had to bring. They turned off Lil John and announced, 'Time for the comedy!' It's about 9 p.m. and everybody's already tanked. Nobody had any idea there was going to be stand-up. Then they go, 'Here's John from Missouri!' It was during KU's homecoming. I ate shit for 9 minutes. I had some girl come up to me and flip me off for a minute straight. They took a vote on the back deck, came in and said 'One more joke and you're done.' I went home and I wanted to lock every one of those mother f*ckers in their jeeps and set them on fire. I could not have wished more harm to them. Anyway, it was a blessing that wasn't my first show. You get addicted to that feeling of doing well. As long as you think you're doing well, then you crave it."

Adri Pendergrass, the lone Garofalo in this Gaffigan-fest, was blessed with one of those smooth inaugural outings.

"My first time, I didn't know if I should take more of a storytelling approach or just get up there and tell jokes," she says of finding her comedic voice. "Then I realized I only had 5 jokes and they were not funny and they were all kind of racist. It wasn't a good idea. Although I found that if something wasn't working, I'd throw in a little something about rape or smoking pot and someone would laugh."

"We're in this age group now where we find really weird stuff funny," muses Gibbons. "Our parents would not find this funny. If you show your grandfather LOL Cats or I Can Has Cheezburger, he'll say, 'What the f*ck is wrong with you, kid? Get a job!' I have this weird obsession with tapping in to this kind of humor in our generation's psyche. I'm convinced that people our age don't give a shit what is funny as long as it's funny. It could be racist or sexist or making fun of old people-normally sensitive stuff. I don't think we're more sophisticated in our ability to talk about this stuff, I just think we have a weird brand of humor and I want to do that in front of people who enjoy it as well."Adri Pendergrass, (Oct. 10)
Jay Maus, (Oct. 10)
Zach White, (Sept. 23)