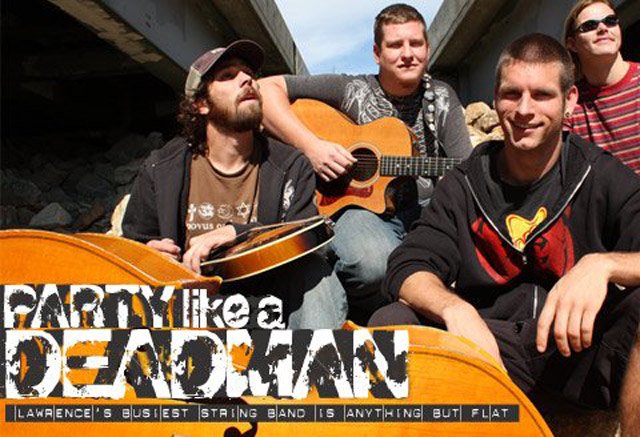 So begins Deadman Flats' debut album, "Antlers." The twangy collection blurs the drunken line between fact and fiction, chronicling the misadventures of everyday boogans and dudes who pick up greeters at Wal-Mart. Only Hutchinson could have spawned such a bass-ackward brand of bluegrass, but only Lawrence could make it sound right at home. The string-band quartet is regarded locally as the kings of "PLAB" i.e. partying like a bitch. They play the PLAB song for the rowdiest crowds, and the PBR song for the cheapest crowds:

Well I'm rolling down the highway I got nothing behind me but blue sky / I'll keep on driving this truck out west until the day that I die / Got a gun in the front seat and a bottle next to me / I got kicked out of Kansas ...

lawrence.com: How did you guys end up in Lawrence?

Hank Osterhout (a.k.a. HankO): Me and Law-dog grew up in Hutchinson and went to high school together : I actually moved up here after junior college to continue my education on the path towards being a doctor. I realized that was a dumbass idea and decided to play bluegrass instead.

Alex Law: I got a really good guitar and he got a bass about four days apart from each other. It was kind of like, "Dude we got f*ckin' guitars and basses now-what are we doing in Hutch?"

Matt Stambaugh: I came from Hutch too and moved up here to go to school. That obviously failed miserably. They brought their instruments so I brought a mandolin and pretended to play it for a long time.

Pat Watt: I learned banjo just to join up with these guys.

Law: We recorded the record before Pat picked up the banjo, so the banjo parts were played by a good friend of ours named Mike Helvey : He and I actually still play in a band called Big Cat. He wrote several of the songs on the album. It was really cool how we met him he was just playing on Mass. St. We needed a banjo player real bad so we just walked up to him and said, "Do you want to come to a BBQ and jam?" About three songs into it we were like, "Do you want to be in a band?" He's probably 40 years older than us.

HankO: Pat was understudying for that first year.

Watt: I learned a lot from Mike about songwriting and being a badass.

Law: He told me a creepy story once about how his friend died and his last wish was to be burned on a big bonfire with all of his friends. So Mike and a couple other guys literally stole the body out of a mortuary and threw it on a bonfire. He was like, "It was the worst thing I've ever seen in my life : It was just f*cked up."

I think I got in trouble once for quoting your MySpace bio that says "one band that is getting nowhere slowly" : That tag probably no longer applies.

Law: Things have been really on the upswing for us lately. We get to open for Vince Herman from Leftover Salmon in Breckenridge next year.

HankO: No, we don't actually. That got switched around.

Law: Oh. It's so hard to keep everything straight when you know Phish is going back on tour (laughter). We're all just so excited.

Law: I'm sorry to all you Phish fans out there. Hank and I were huge Phish fans back when we were 13.

You may be the only band that cites Wu-Tang Clan and Uncle Dave Macon as influences.

Law: Well, when we started this band RZA used to come over a lot. He'd be like, "You gotta get some Dave Macon on this sh*t." What RZA says goes.

HankO: Actually, before Deadman Flats I was in a really unsuccessful hip-hop group called Three-Legged Cat with this other gangly white dude : I still go by "Snaggletoof" but it's no longer gangsta it's redneckafarian.

You guys have a big show tonight with Split Lip Rayfield. Is that one that you're excited about?

Stambaugh: I probably wouldn't be in this band if I hadn't seen Split Lip Rayfield.

Law: I'll agree with that. I wouldn't be playing guitar the way I do if it wasn't for seeing Kirk Rundstrom at Winfield.

HankO: It's actually a huge honor and privilege to open for those guys.

What are some other memorable shows you've had?

HankO: We would hear about house parties and call each other and infiltrate them and just throw down : That's the beauty of playing an acoustic instrument.

Stambaugh: It almost got us in a couple fights. It was always worth it though.