So we've already blown the opportunity for a perfect season...this is the worst football team ever. I only pay attention to winners who live up to impossible standards during fair weather. Truly pathetic. Why bother continuing the season? Shouldn't we just suspend the whole football program?

"C'mon man, LSU won the national title with 2 losses last year. Besides, if we suspend the football program we may miss a chance for more Taco Bell hijinx. Don't ever forget Chalupa-gate!"

Okay, so maybe I overreacted. Do you think there's a chance of obtaining the same level of street violence-inducing greatness as last year? Will there be more scurvy-fighting bowl games in Mangino's diet?

"I believe that there will be many more fresh fruit-related events in Mangino's future, whether it be a complete overhaul of his diet or Orange Bowl appearances. I'm hoping for a combination of the two. I like the man, and I want him to stick around for a long time. As far as greatness is concerned, we can definitely achieve it. I still think that we're on track for some great things from this year's team. We have 4 games left against Top 10 teams, so we have a lot of opportunities to make a statement this season. Besides, last year's team really pissed off the entire national sports media, culminating in the Orange Bowl win and Aqib Talib's 'They gotta say we played somebody now!' speech. Why not let their nightmare run for a second straight year?" 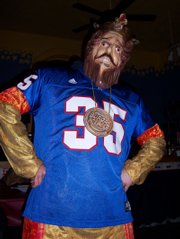 "The proper way to tailgate is to show up around 3 hours early. You want to get a reasonable drunk on, but you don't want to have to rush things. If you show up with only 1 hour to go or something, you could drink too fast and cause all kinds of embarrassing things to happen. Remember, Row 67 is a long way up, fellas. Post-game? Some folks like to go to the Wheel, but I like Rick's Place. It's generally closer to my car, so I find it to be the ideal place to wait out the post-game traffic. Also, if you're lucky enough to have friends who have a tailgate tent on the hill, that's a great place to stop by as well. You probably left your beer and lawn chair up there anyway."

Any tips for game day parking in Lawrence? Is it advisable to attempt parking on top of other vehicles?

"Don't park on the practice fields or try to wedge your vehicle into the Campanile. Again, the key thing here is time. If you get there early enough, you should find a spot along the streets just north of 9th Street. If your walk is less than a half mile to the stadium and you didn't have to perform human sacrifice or give some jerk $25 for the spot, you've done very well my friend."

Is Todd Reesing the Shetland Pony of the Big 12?

"Considering he inspires young men to knock the crap out of each other on a weekly basis, I'd have to say that disqualifies him from being compared to any Buddha, especially Siddhartha. However, that makes him no less a deity."