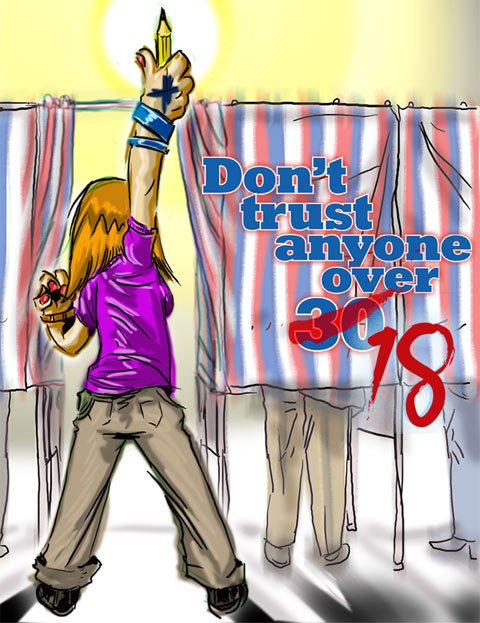 Everyone said the world would change and it did. And the events that followed the tragedy-no need to list them here-were put into motion before she was a teenager.

She turned 18 last week and now, in the midst of the economic crisis, she prepares to vote in her first election. As things fall apart, she can safely say that the mess of a country she inherits is one she did not help create through the electoral process.

When President George W. Bush was elected to his first term in 2000, voter engagement was at a historic low, according to a Pew Research Center report. A few months before the election, 43 percent of the people said they had given it "only a little thought."

With momentum swinging back around and voter engagement peaking for this election, the youngest voters have seen as sharp a rise as anyone. Only 35 percent of voters between 18 and 29 had given "quite a lot of thought" to the 2000 election. This year that number has nearly doubled to 67 percent.

Enough statistics. What is it Kapp-Klote and these youngest of the young voters want? The same things everybody wants. A good economy. A way out of Iraq. Affordable health care.

But will enough of them vote to make a difference? That is always the question. Why wouldn't they? The answer is in the script: apathy. What is the root of this apathy? Is it apathy at all? Maybe it is. But is it their fault? A key ingredient of this cycle that people tend to forget as they age is this: the condescension young voters have to stomach.

"There's just this tone, a lot of the time in politics, that isn't really hospitable for younger people," Kapp-Klote says.

The worst offenders aren't the grandparents or great-grandparents. Those who survived the Great Depression, who fought in World War II, who fought in the Korean War, who themselves once breathed the fire of condescension upon those idle youths whom they called the hippies.

No, Kapp-Klote says, it is the former hippies, and those hangers-on who came along just too late for Woodstock, who now get on the case of the youngest voters.

As members of "the greatest generation" berated their children for protesting the Vietnam War when they had fought in ugly wars of their own, for criticizing their country when they had stood to preserve it, so the baby boomers have been criticizing the new generation for a decade now. Saying they don't care enough, don't protest enough, they're too satisfied.

It is probably natural to criticize the generation that comes after you. But it is also natural to not completely understand that generation. A person can have as great an impact by creating a Facebook group that hundreds of people join, Kapp-Klote says, as by standing in the street with a megaphone.

Kapp-Klote, Free State senior, and Carina Fowler, Lawrence High senior, are organizing a rally for young voters on Oct. 18 at the Lawrence Public Library, where people can register to vote just before the Oct. 20 deadline.

Both are presidents of the Young Democrat clubs at their schools and have been active volunteers during this election cycle. (For Fowler, this despite the fact that she is only 16). Both of these yout's, OMFG, have probably given more thought to the election than your average Bob 30-Pack, and are maybe more informed than some of the vice presidential candidates.

lawrence.com: Talk about this event you're organizing.

Kapp-Klote: People have this idea that young people don't vote and don't care, that they're really apathetic. I think the problem is the way people phrase things. ... Of course they don't want to vote and they're apathetic, because they have an entire political system that's not really addressing the issues that they want to deal with.

Not only are they not addressing them, but they're also saying, "Those young people, we really need to get them out to vote." There's just this tone, a lot of the time in politics, that isn't really hospitable for younger people.

The idea for Rock the Vote, stemming from that, is we don't want people to see it as something that is obligatory, where a bunch of old people are telling you, "This is how things are going to go." It's about being exposed to candidates and exposed to politics that are important to you.

Kapp-Klote: People talk about the '60s, about the '70s, and Vietnam. We're both in a political class and even the textbooks are saying, "Back when Vietnam was going on, there were a lot of people who were interested in politics. Your generation doesn't really care."

Fowler: The reason why that is, though, is because during Vietnam there was a draft. The young people were directly affected, so there was a lot more incentive to become involved. We don't have that.

Kapp-Klote: Yesterday (the Journal-World) published an article that said voter registration is incredibly high. People are really interested. Whoever knows what it is about this year. It is important, and we are seeing a lot of people who are registering to vote, and I think you are really getting that youth voice, in spite of what people maybe say about the apathy of the teenage population.

Young people do have to stomach a lot of criticism from people who were young in the '60s and '70s. They love to say, "You guys don't do the things that we did."

Fowler: So we're not going to go to Woodstock and run around naked. We're going to do what you guys did but also be productive about it. It just makes me angry when older people dismiss involvement in politics from people from our generation because it's not on the biggest scale, as it was in the '60s and '70s. But I can pretty much guarantee you that if there were a draft we would see that sort of activism pop up again.

Kapp-Klote: You see a lot of statistics that say the young people don't watch the news or they don't go to protests. And that's seen as the comprehensive, ultimate indicator of whether or not young people are involved in politics. I think a lot has changed since the '60s.

Fowler: And the political system has changed too.

Kapp-Klote: Especially in terms of the way people interact with it. Facebook is seen as this really frivolous tool, which it certainly is, but I know a lot of people who get online who will not only register five people to vote, on Facebook, but who also will be able to recruit 100 people to go to a Nancy Boyda rally or a Pat Roberts convention.

Don't trust anyone over <s>30</s> 18: An interview with Hannah Kapp-Klote and Carina Fowler

It's just as important and it has just as much political impact as going to a protest or a love-in or something back in the '60s. Not to dismiss either type of politics, but both are involvement. Both are engagement. It's just one is not always seen as being particularly engaging, and I think that's unfortunate, because I think there are a lot of kids who are just as engaged as maybe people were in the '60s.

It's less in your face.

Kapp-Klote: It's subtle. Political candidates are making a big deal out of how the internet is changing the political landscape, and I think that it's definitely impacting the way you process news. You can go to 13 different news sites in about 20 seconds.

There are definitely some issues with that barrage of information but I also think that there's a really good way, and it's a really effective way, to know about current events, to be aware, to be informed, and to figure out how to be most effective in your community.

People are always trying to figure out what new voters care about. What issues are important to you?

Fowler: There's a triumvirate of issues in my mind: the war, the economy and-I don't know if this is necessarily a big one in most people's minds, but I think it's on the mind of a lot of young people-gay marriage.

The war: Obviously, if there's a draft it's going to impact our generation.

The economy: If it tanks, it's going to be a lot harder to go to college. I've been talking to a lot of friends, and they're saying, "I think I would be accepted at UPenn or Brown but my parents won't be able to pay for that, so I'm going to have to go to KU." Which is not a big thing, but they would want to go elsewhere.

Gay marriage: It's the tolerance issue of our time, in my opinion.

Kapp-Klote: Young people are concerned about the same things that their parents are, that their grandparents are. It just affects them in a different way. Growing up in a generation that was either born after 9/11 or was really young-

Kapp-Klote: If you've grown up in a world after Sept. 11, it almost seems like America has always been in this place where we don't negotiate well.

Fowler: We're always on the defensive.

Kapp-Klote: A lot of young people that I've talked to really want to get to a place where international relations and how we relate to the world aren't seen as so isolated. Â»