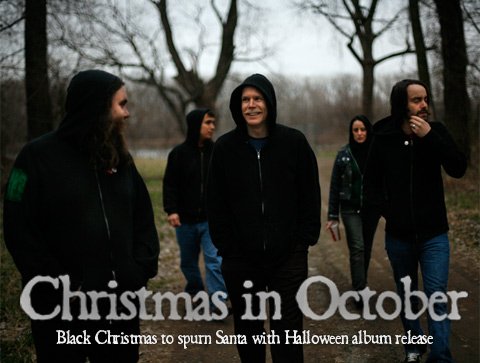 A band with a name like Black Christmas is probably better off celebrating its CD release on Halloween. The instrumental Lawrence band is right at home with the macabre, taking inspiration from horror-film composers like Angelo Badalamenti as well as doom-and-gloom prog bands like Goblin and King Crimson. The group's debut long-player "By Way of Decay" showcases seven of the thirteen tracks the band has recorded during the past two years, with a companion release likely to follow in the not-so-distant future. Guitarist Dalin Horner and bassist Nathan Whitman dropped by with the album to catch up on all the latest Blackness and yuletide cheer.

A band with a name like Black Christmas is probably better off celebrating its CD release on Halloween. The instrumental Lawrence band is right at home with the macabre, taking inspiration from horror-film composers like Angelo Badalamenti as well as doom-and-gloom prog bands like Goblin and King Crimson. The group's ...

lawrence.com: I have to imagine the fact that you're doing your CD release party on Halloween is at least a bit intentional.

Horner: Well, our first show was on Halloween, so it seems kind of appropriate. It's kind of a horrible night, I suppose, to try to sell records.

Is there something particularly Halloweeny about this band?

Whitman: I think maybe in the beginning there was. We formed in August 2004 and by the time we got our shit together to play live it was October.

By Way of Decay

Do you think this band has more of an affinity for Halloween or Christmas?

Whitman: We do the occasional waltz, I guess.

Horner: I suppose it'd make a great gift. It goes well with diamonds.

So Dalin, I know you used to be in a band called Santo Gold-which has apparently totally blown up within the last year.

Horner: (laughing) Yeah, it was on the marquee at Liberty Hall ... Apparently she did the right thing by combining the words because we received a cease-and-desist from the guy that did "Santo Gold's Blood Circus" ... It was one of the very first infomercials where they hawk cheap jewelry, and then the guy got busted for all these credit-card scams.

Horner: It's two 30 minute tracks, and I guess you could call it a political statement in a way. It was basically a retrospective on the Weathermen and the Black Panther Movement.

Horner: Yeah, it was weird that right after that Obama gets accused of knowing terrorists.

Why was that something that you wanted to explore artistically?

Horner: I just didn't know much about it until we saw the documentary ("The Weather Underground"). It kind of blew my mind on the things that the government can get away with.

What's the story beinhd the song "Face in the Fire"?

Horner: A couple of the tracks we named after Kansas folklore. "Sallie the Man-hater" was about the Sallie House in Atchinson, and "Face in the Fire" is another Kansas myth.

Do you aspire to create music for films?

Horner: Eventually, that would be great ... It just seems like you have more freedom to step outside the box.

What would you recommend for further listening?

Horner: Goblin. John Morris, who worked with David Lynch on the "Elephant Man" soundtrack. The Twin Peaks soundtrack. Nino Rota, who did the "Godfather" soundtrack. I'm kind of drawn toward the moody and dark composers more so than John Williams. Not that "The Imperial March" isn't dark.

Maybe if the Jayhawks go on another March Madness tear you guys can do the music for the 2009 title DVD.

Speaking of waltzes, are you still playing any accordion?

Horner: We haven't really incorporated it into any of the stuff we've been working on lately. I've always been into the idea of putting in as much instrumentation as you can glockenspiel and accordion and pedal steel and sleigh bells.

Whitman: "By Way of Decay" has a bona fide country legend on it.

Horner: Yeah, I opted not to play pedal steel on the record. I just let my Dad (Jerry Horner) do it, because he's the pro ... He played with Lefty Frizzell, Ray Price, Hank Thompson, Roy Clark.

Was that how he made his living mostly?

Horner: Until I came along, yeah. But he still plays and does session work and one-off shows.

Whitman: He was supposed to play our CD release, but he couldn't make it up.

Horner: He drives a school bus. He was in the Cherokee Cowboys with Ray Price when Willie Nelson played bass ... Willie sold the song "Nightlife" to Ray Price for $200 apparently.

What does he think of your band?

Horner: He likes it. It's weird that the stuff he really tends to take a liking to is the ambient stuff, which I would think would be the opposite. But I think he likes the textures, being a pedal steel player.

he hermp merp laugh we are on the same page, guys. welcome back, nata. can't wait for the halloweenies! love, adri

This band is bad ass! I love the way the guitars sound very vintage and very hot sounding. Really the overall sound of the band seems to portray a vintage feel--even the drum parts. Just continue to go darker and evermore twisted sounding :)