Occupation prior to becoming a brain feasting metaphor for societal collapse: Housing maintenance for KU

What were you doing when killed and reanimated? I was watching the presidential debates and got into a heated argument with a Republican-next thing I knew, I was one of the wandering undead.

Favorite places to infect the living? Yokohama restaurant. They have great sushi, sake and you can spread horribly infectious diseases.

How would you describe your stench? Something like week old beer that's been warming in the intestines of an undead zombie-oh, I think I sprung a leak. 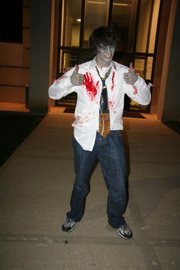 Favorite trends in mortuary fashion? I'm a big fan of zombies in a well cut black pinstripe suit, maybe throw in a bright red power tie. Other than that, I like a zombie who comes with a tuxedo t-shirt, because what that says to me is "I'm classy, and I'm here to party".

People say I look like: Someone they know, then I rip their throat out...

Favorite recipe for brains? Most zombies like it raw, but I have to say, there is nothing better than a good brain stew. The secret is to add just a little paprika and chili pepper- gives the brains just the right zing.

Tell us a secret: I really hope that no one shoots me in the head during the zombie walk. It would end the night on sort of a bad note.

Please tell us a little bit about each of the following items you're wearing (where it came from, whether or not it's used, and how much it cost):

Shirt and tie - The shirt I'm pretty sure was a Christmas present from three or so years ago and the tie was given to me by the Newton High School swim team, Pretty sure they got it at a thrift store...

Blood and viscera - That's mostly from my roommate, Stephan. I sort of ate his face while he was sleeping. Sorry man, but I was really hungry.

Filth and putrescence - Dirt and leaves from around Lawrence-it's a lot harder to catch the living than it is in the movies.

Accessories - All of my make up came from Fun and Games on 23rd. Other than that, I'm dead-what do I need accessories for?